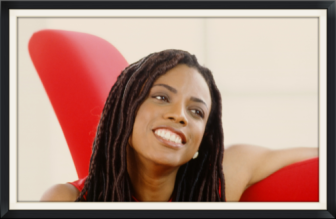 “I want to share my story so that others can learn to own their heritage as I have, both the good parts and the bad, and be able to move on to shine like Demerara gold.”

Ingrid Griffith, actress, playwright, and teacher, was born in the Caribbean country of Guyana, a large portion of which was formerly known as Demerara, where her grandfather panned for gold. After writing part of her life story for her master’s thesis, she realized that she wanted to share the story with others and felt that the best way to do so would be utilizing the rising popularity of the solo show genre.

When Ms. Griffith was only seven years old, her parents were lucky enough to have received visas to the United States, and left her with her grandmothers with a promise that they would be together again soon. In her mind, “soon” meant in six months or so, but in the end they were not reunited until she was 12 and received her own visa to emigrate to the United States.

The first part of the play, in which Griffith plays 18 different characters, portrays the five long years she spent in Guyana with her older sister, wondering when they would be able to move to the U.S. and speculating on the wonderful lives they would lead there. The second half of the play deals with the reality of life here, the adjustments she and her family had to make, and the toll it took on them, including domestic violence.

The show has been touring for two years now, with approximately 50 performances, here in the United States, in London and in Guyana.

When asked about her audiences’ reaction to the play, Griffith said that it resonates not only with Caribbeans, but also with immigrants from other areas who had similar experiences to her own. She is pleased that the play also has reached children and great grandchildren of immigrants who did not fully appreciate their families’ stories. Griffith wants people to own their heritage, laugh at their foibles, cry for their sorrows, rejoice in the happy moments, and gain strength to move on.

For more information about the play, go to www.demeraragoldtheshow.com.