When all on-campus classes of the Brooklyn College Big Band were cancelled, the band’s Director, D.D. Jackson, a SOMA resident and multi-Emmy-winning composer, told his students to play together anyway, virtually. Jackson proceeded to create guide tracks, which the students subsequently listened to on headphones while they used their phone cameras/mics to simultaneously record their own individual parts when they had a moment to do so. He then mixed their resulting audio, and edited their videos together, trying to best match the ebb and flow of the music. The reaction to the results (some examples of which can be seen here) was overwhelmingly positive, encouraging Jackson to start his new service, Remotely Recorded Ensembles.

Recently we sat down with D.D. to learn more about the process: 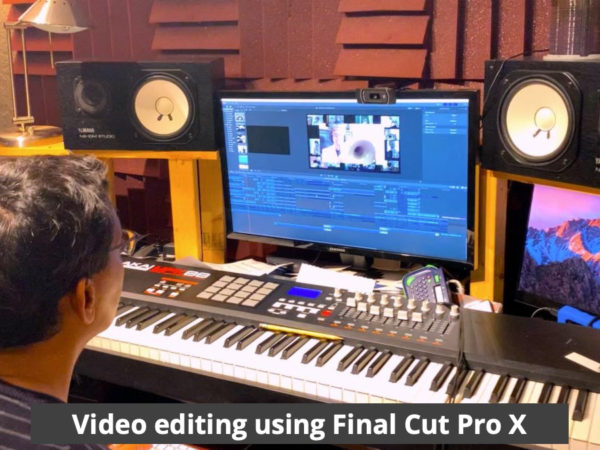 What’s the biggest misconception that people have about the service?

I’m realizing that people see the videos and often think they must have been recorded “live” over Zoom (with some further video tweaking perhaps after the fact). So I realize I need to do a better job of explaining the process, which is really much more involved in order to recreate the feeling of “live” even as we shelter-in-place.

It really starts with a guide track that everyone can record to. For a recent Middle School’s vocal project (for example), I had the Music Director record herself singing all 4 sections to the same piano accompaniment I provided, and then sent this out to the 24 singers, who subsequently listened to it on headphones while they used their phone’s video camera and mic to record themselves singing just their individual parts. I then took the audio from all the videos and imported them into Logic Pro (my audio editing program), applying noise reduction, optimizing the sound so they all sounded like they were in the same room, and moving things like “s” sounds around so they all lined up (something trickier to do when not actually recording together!) The final stereo audio mix was then imported into my video editing program (Final Cut Pro X) along with all the individual videos, where I worked on creating a video version that complemented the vibe of the music. It takes many hours of work but hopefully the results are worth it, and the illusion of everyone actually having recorded at once comes through. Certainly, it’s very fulfilling for me to get such positive reactions from people, especially since it’s near-impossible for particularly choruses to meet and rehearse together at present.

What sort of setup do the individual performers need? Do they need a professional microphone?

All they need is a typical phone camera/mic. I’ve worked with some university students who have better mic setups in which case they simply record video of them doing their part, and then send it along with the “better” audio for me to sync up. But – regardless of the source – I will work to equalize things/balance/compress the sound and then line things up to make everything feel plausibly in the same room, just as I would with any recording I’ve produced in the past.

What is the maximum number of parts you can accommodate?

The largest I’ve done thus far is 26 separate parts. However, the sky technically is the limit – it really depends upon the time/budget factor. People should just let me know what they have in mind and I’ll try to work to achieve it!

Does the ensemble director need to have all the arrangements written out, or can you help with this?

I always love helping with arrangements if asked (calling upon my background as a multi-Emmy winning composer for t.v., an arranger for The Roots, composer for big band, etc.). I’m working with a gospel group right now, for example, where the group’s leader has specifically requested that I put my own “spin” on the piece she wants to do, and has also requested that I play piano/keys (I’m also hiring a bassist and drummer to complete the backing band, to go with 8 vocalists). Of course, if I do the arrangements then part of the process will also be for me to write out any needed sheet music charts for everybody. In other situations, the client provides an existing arrangement and I simply help create the audio backing tracks and then send them along with the existing sheet music out to the players.

Can the ensemble director still take part as conductor?

Yes, and there’s two ways I’ve been experimenting with this. One involves more “cosmetic” (after the fact) conducting, where I essentially create the backing track, give it to the conductor who uses it to record a video of them conducting to it; and then when I edit the final videos together of all the players I mix in the conducting (visually) as well. I’ve also had situations where it’s really important for the players to actually record their parts while watching the conducting (such as for pieces that have a lot of speeding up/slowing down and other interpretive touches). For those situations, I first have the conductor convey to me the timing they are seeking for the piece; I create the backing track from this; they listen to it and film themselves conducting to it; and then I send an actual video of their conducting the backing track to the participants for them to watch while they record their parts! The whole process can seem complicated but the result, people have found, is well worth it and it feels good to preserve something for posterity, especially in this shelter-in-place age!