From the Springfield Avenue Partnership:

Maplewood, NJ – More than 200 community members gathered over six days to create Rivers: the Yale Corner Mural Project, at the vacant lot at 1866 Springfield Avenue. Barbara M. Bickart (founder of Fire in the Belly Artmaking) led the project and collaborated with Andrew Dean (artist and Tuscan Elementary School Art teacher), 15 local young artists, and about 200 community volunteers of all ages. Together, the group braved a July heat wave to paint, make friends, and have fun while completing this approximately 6,000-square-foot mural.

A community dedication featuring Bickart, Dean, several of the young artists, community volunteers, Maplewood Mayor Dean Dafis, and other representatives will be held on Wednesday, July 27 at 6:00pm at Yale Corner (1866 Springfield Avenue). 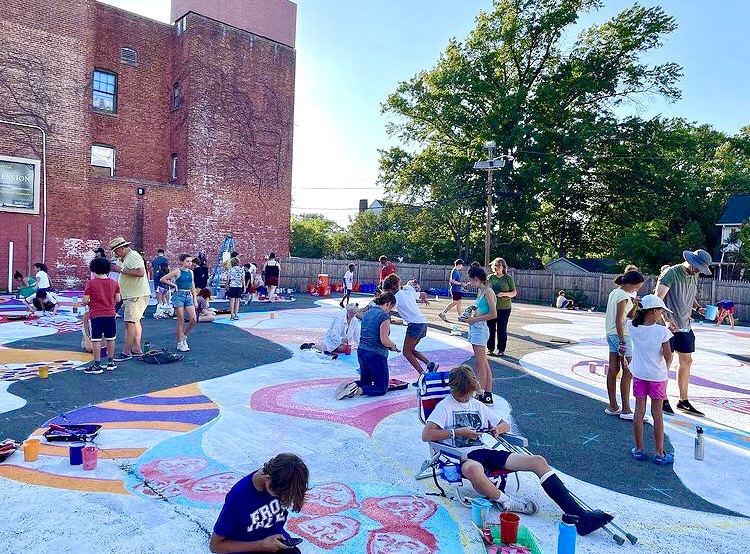 The mural is sponsored by the Springfield Avenue Partnership (SAP) Business District together with Maplewood Township, with funding from the NJDCA Neighborhood Preservation Program. 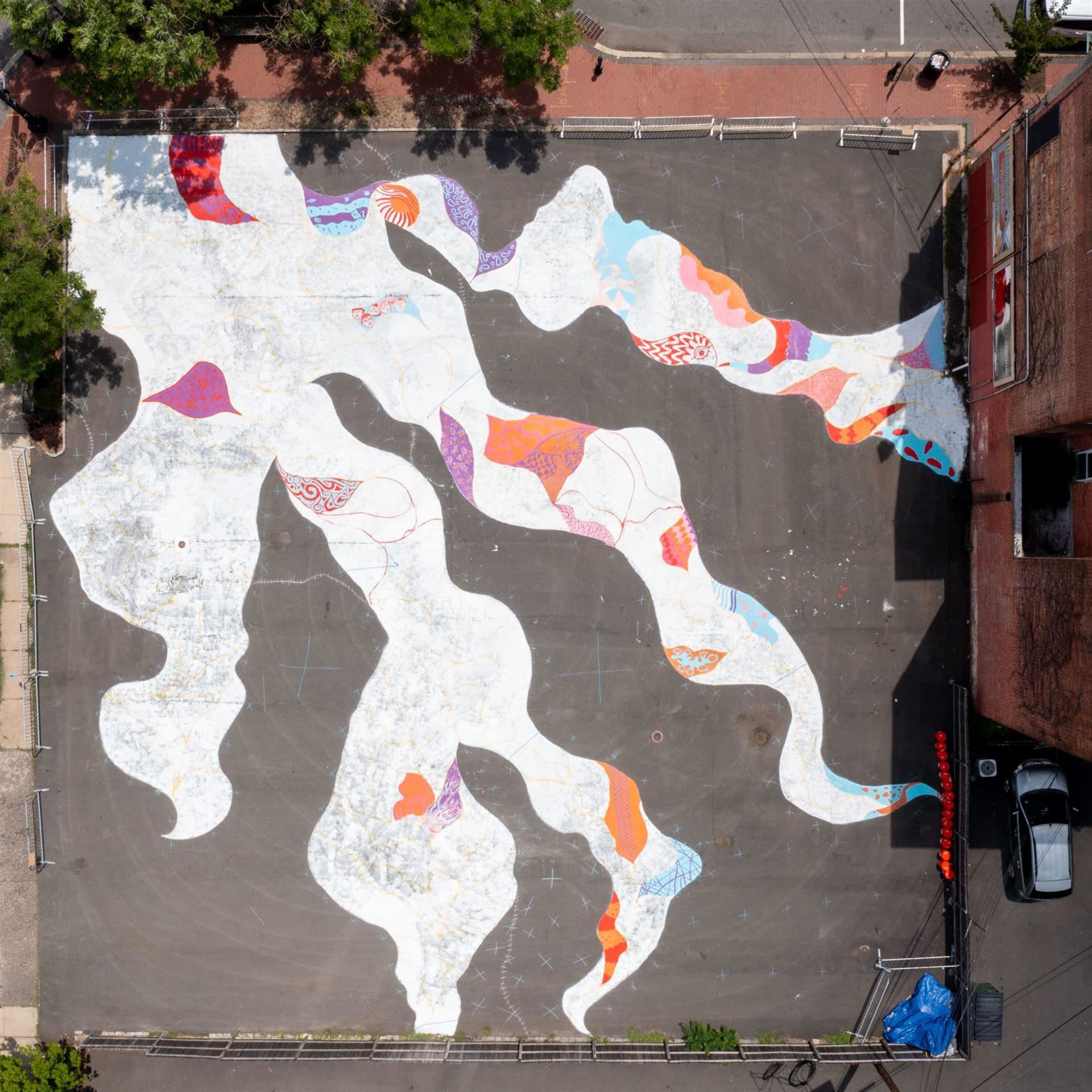 “When I saw the request for proposals put out by the SAP for this mural,” Bickart said, “I got really excited, because they specified that they wanted a mural that would engage the community in the creation of it — for real. I reached out to Andrew Dean, because we’ve worked well together before. I wanted to involve a bunch of the young artists I’ve worked with through Fire in the Belly Artmaking, and so we organized a community meeting, where we could talk about the concept for a mural that would really engage the whole community. I was excited about a river as a powerful metaphor for what Community is because rivers are dynamic and never stop flowing and evolving, the same as a community that is healthy and strong. Andrew conjured an initial drawing, a big outline, and in that meeting with 15 young artists we talked about what Community means to each of us, including each having a place where we feel valued and seen. We launched from there by doodle our way into the big outline of a giant river we’d created on paper. We all loved it, and that meeting nailed how we could make this work; we could bring people together and ask them to fill in the banks of the big river outline in whatever way they chose, within the color palette we chose, to ensure visual cohesion. Everyone would have a place.”

The project is part of a bigger plan to beautify and activate Yale Corner, which hosts events such as the Maplewood Farmers Market, Open Air Retail Markets, live music, and more. 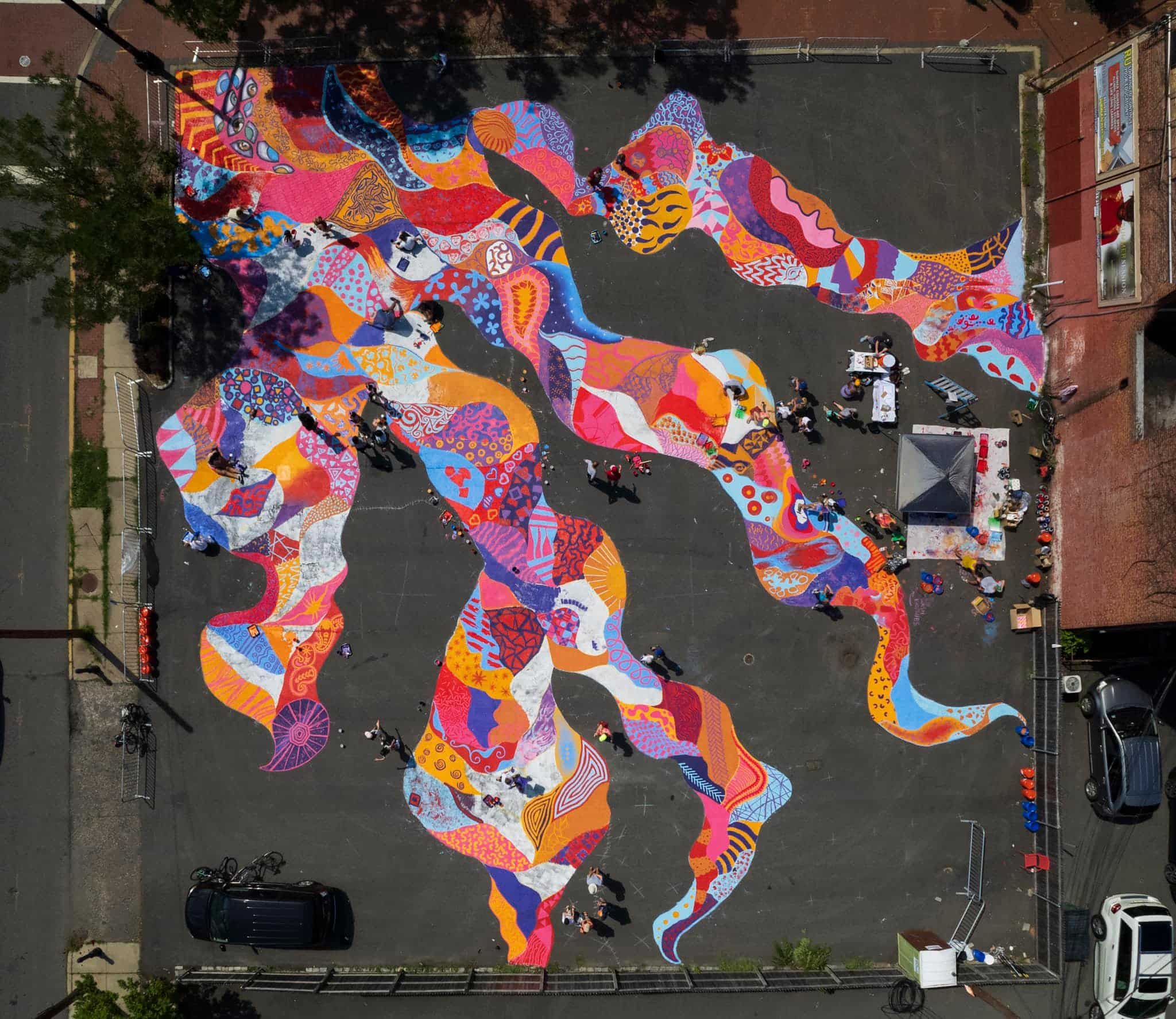 “When SAP issued this RFP for a community mural,” Dooskin Wallace said, “I never expected the community part to supersede the mural part. The community magic that happened over these six days under Barbara and Andrew’s leadership surpassed expectations. SAP is thrilled that Springfield Avenue’s Yale Corner is home to this treasure, as we continue to invest in the neighborhood.”

Bickart added: “Making art together is the very thing that creates and strengthens a community. It opens up space for conversations and connections, space to find commonalities, space to explore differences, space to deepen understanding. What happened this past week, with the number of folks who came out to make creative magic happen, is beyond moving. Look at what we did. Look at the beauty we made.”

About the Springfield Avenue Partnership (SAP): SAP is the district management corporation of the Springfield Avenue Special Improvement District, a self-governed entity that funds itself primarily by a special tax assessment on commercial properties within the improvement district and is a 501 (c) (3) non-profit corporation governed by a Board of Trustees comprised of business and property owners, local residents and municipal officials.