In a little-heralded announcement last month, one neighborhood district in Maplewood and one in South Orange were added to a state program that will deliver “preservation and revitalization” through grant money as well as training and technical assistance.

The two districts are the Hilton neighborhood/Springfield Avenue in Maplewood and Irvington Avenue’s Seton Village neighborhood in South Orange, with each receiving an initial $125,000 grant.

The grants can be used for the following:

The New Jersey Department of Community Affairs awarded the grant funding as well as “an array of technical assistance and training to support the empowerment of participating local governments, nonprofit groups, and neighborhood district stakeholders so they can build a foundation to sustain their revitalization efforts over time.”

And more money could be coming.

According to Springfield Avenue Partnership Executive Director Nicole Dooskin Wallace, who will lead the program in Maplewood, the townships have been awarded 5-year designations, including the initial $125,000 grant, but “pending annual State budget capacity, the Hilton Neighborhood/Springfield Avenue District is anticipated to receive up to $125,000 a year for a total of five years to assist with economic and community development.” 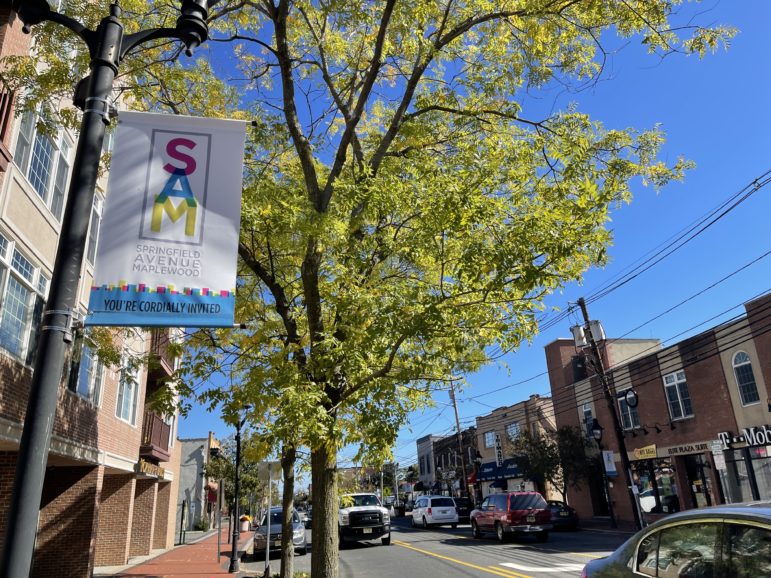 Hilton/Springfield Avenue and Seton Village joined 18 other newly designated neighborhoods across New Jersey, with DCA in effect doubling the size of the NPP.

“I want to thank the DCA for their continued support of Maplewood’s development initiatives. Springfield Avenue is our most robust and diverse business district.  This grant will allow us to continue our efforts to enhance the quality of life for our Hilton community by providing additional amenities and assist us with attracting and retaining an array of new and upcoming small businesses. It’s a big win for all of Maplewood,” said Maplewood Mayor Frank McGehee via a release. 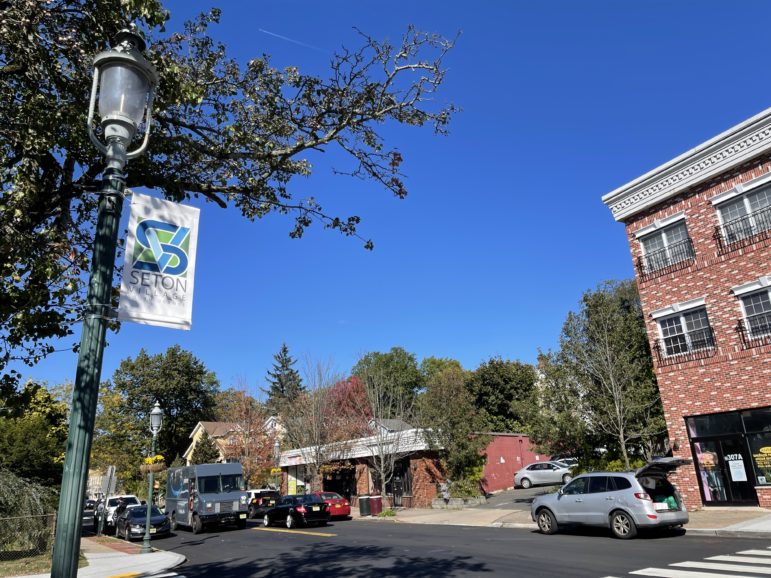 Meanwhile, South Orange Trustees adopted a resolution accepting the grant and appointing Sally Unsworth as the director of the grant program in South Orange at their November 8 meeting. Trustee Summer Jones expressed her excitement that the township was able to bring Unsworth on to administer the program.

“This is really exciting news for both districts,” said South Orange Deputy Administrator Julie Doran, who is a former director of the Springfield Avenue Partnership. “Both are absolutely ready to make the most of this opportunity! I’m happy for both towns/districts.”

Jones told residents to stay tuned for more information as the townships set up the programs and perform community outreach to create a framework to deliver the grants and decide on activities.

South Orange officials and the Seton Village community celebrated the grant and other initiatives at an event on October 30:

From the NJ Department of Community Affairs:

[October 7 – Trenton] The New Jersey Department of Community Affairs (DCA) today designated 20 communities from across the state to join the Neighborhood Preservation Program (NPP), which is designed to strengthen the economic health of threatened but viable neighborhoods and to encourage private investment in these communities. The Department selected the communities through a competitive application process.

The NPP program, which began in 1975, focuses on revitalizing neighborhoods that are beginning to decline through local planning and community participation and building local capacity and coordination to maximize grant funding and sustain neighborhood vitality. There are 40 neighborhoods participating in the program, including the new communities announced today.

“Since the very beginning of the Murphy Administration, DCA has committed considerable resources to programs that foster economic growth, community development, and housing rehabilitation in neighborhoods at risk of decline. The expansion of our Neighborhood Preservation Program is a critical part of this effort,” said Lt. Governor Sheila Oliver, who serves as DCA Commissioner. “We believe that strong neighborhoods lead to sustained prosperity for the individuals and families who live and work in these communities. We’re excited to have these new neighborhoods join our program and benefit from the assistance, guidance, and funding that we provide.”

Communities were required to show a commitment of resources from the neighborhood and municipality, as well as support from community organizations and residents. They were also encouraged to demonstrate participation in other state or federal programs, including designation as a Neighborhood Revitalization Tax Credit (NRTC) neighborhood, Opportunity Zone, Main Street New Jersey district, Transit Village, Urban Enterprise Zone, or other relevant designations.

The Department will award $125,000 in grant funding to each newly designated community to help them achieve their goals. In addition to the funding, a hallmark of NPP is that the program offers an array of technical assistance and training to support the empowerment of participating local governments, nonprofit groups, and neighborhood district stakeholders so they can build a foundation to sustain their revitalization efforts over time.

·     Camden – Parkside District: The Parkside District in Camden, Camden County, has a strong community-based alliance that will lead the NPP work.
·     Newark – Lincoln Park Coast Cultural District: The Lincoln Park Coast Cultural District in Newark, Essex County, is the most densely populated NPP district in the state.
·     Vineland City – Southeast Center City District: The Southeast Center City District in Vineland, Cumberland County, is home to many businesses along Landis Avenue, including the historic Landis Theatre, whose art deco style can serve as a basis for future marketing and branding initiatives.
·     Trenton – Creek to Canal District: The Creek to Canal District in Trenton, Mercer County, has a mix and density of commercial and residential properties; a history of placemaking and economic development; and a base of local assets.
·     Wildwood City – Pacific Avenue District: The Pacific Avenue District in Wildwood, Cape May County, includes an active business improvement district, a covered amphitheater for hosting entertainment and events, and close access to Wildwood’s beaches.
·     South Orange – Seton Village District: The Seton Village District in South Orange, Essex County, includes a commercial area along Irvington Avenue, residential housing, and engaged residents, nonprofit institutions, and businesses.
·     Flemington – Southern Gateway District: The Southern Gateway District in Flemington, Hunterdon County, seeks to address short-term needs with high-impact projects such as rail-trails, improved commercial and residential facades, and placemaking enhancements
·     Maplewood – Hilton Neighborhood/Springfield Avenue District: The Hilton Neighborhood/Springfield Avenue Corridor in Maplewood, Essex County, benefits from a special improvement district run by the nonprofit Springfield Avenue Partnership and a neighborhood association, as well as several local assets in the way of a library branch and municipal police complex.
·     Hackensack City – Anderson Street Historic Neighborhood District: The district embodies Bergen County’s Hackensack of yore and on the rise. While Main Street features new investment, the City wants to preserve the neighborhood’s historic character, which includes the art deco Sears Building and Dutch Colonial Revival buildings.
·     Gloucester City – South Gloucester City: Located in Camden County, Gloucester City’s NPP district encompasses a mixed-use neighborhood that seeks to focus on the community assets of Proprietor’s Park and Freedom Pier, which are considered local hidden gems.
·     Boonton Town – Main Street District: The Main Street District in Boonton, Morris County, includes the core of Main Street, with a collection of businesses, apartments over storefronts, and public facilities such as the historic library, NJ Transit train station, and the Darress Theater.
·     Hawthorne – Gateway Area: The Borough of Hawthorne, Passaic County, is focusing on strengthening its Gateway anchor and surrounding area by improving access to community parks, recreational opportunities, and mass transit.
·     Atlantic City – Ducktown District: The Ducktown District in Atlantic City, Atlantic County, will be undergoing major flood remediation in the coming years and has a strong relationship with Stockton University, which has a campus within walking distance.
·     City of Somers Point – Bay Avenue/Waterfront District: The NPP District for Somers Point, Atlantic County, is the Bayfront Neighborhood, which includes a historic district with approximately 190 buildings, including the Gateway Theater and Richard Somers Mansion (the oldest surviving building in Atlantic County).
·     Freehold Borough – Downtown and Historic Peach Orchard District: The NPP district, which features many county government buildings, seeks to boost its small businesses, engage residents to create a deeper sense of community, and highlight district assets, including the historic Court Street School.
·     Highland Park – Corridor 514/Woodbridge Avenue District: The Woodbridge Avenue District in Highland Park, Middlesex County, serves as a main access point for the community, which can benefit from placemaking goals such as installing community-reflecting public art, trees, and street furniture for public use.
·     Newton Town – Newton Town Center: The Newton Town Center in the heart of Sussex County features many county government buildings and a rural main street that can benefit from storefront and residential facade grants.
·     Gloucester Township – Blackwood District: The Blackwood District in Gloucester Township, Camden County, is the target for most of the Township’s CDBG funding for small business grants and housing rehabilitation and its focus for creating a strong arts scene.
·     Jersey City – Jackson Hill District: The Jackson Hill section of Jersey City, Hudson County, which includes the commercially-focused MLK Drive and dense residential housing, seeks to address quality of life and public safety concerns while avoiding rapid gentrification.
·     Town of Belvidere – Waterfront/Historic Downtown District: The county seat district in Belvidere, Warren County, seeks to leverage its rich history and clear rectangular design to elevate the downtown business district and economic growth.

For more information about DCA, visit https://nj.gov/dca/ or follow the Department on social media: