After 22 years, Norman Scrivener is retiring from the toy business. He has sold his iconic and beloved Maplewood Village store, Scrivener’s Toys & Collectibles, to focus more on his position as as specialist in charge of philatelic and numismatic properties — aka stamps and coins — at the New York auction firm Doyle.

“I decided I needed to pull in the reins and concentrate on my other job,” said Scrivener in a recent phone interview. “That’s my real passion…it’s time to move on.”

But local parents and children, fear not. Scrivener is passing the torch to longtime local and former employee Erin Lundstrom, who is thrilled to be running a store in her hometown.

“This is where my heart has always been,” said Lundstrom, referring to both the store and Maplewood itself. “I always wanted a store of my own, but I didn’t think it would happen.” 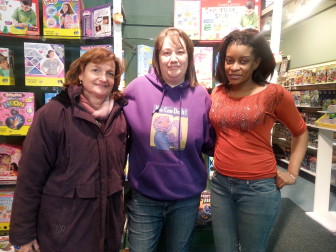 Raised in Maplewood, Lundstrom’s first job out of high school in 1997 was at Scrivener’s. Norman and his wife, Joan, “taught me the business and the industry,” she said. She eventually became the buyer and manager, then left to work at various large toy companies.

The biggest change will be the name, which Lundstrom is changing to Shenanigans Toys. While the store will continue to be the warm and friendly, well-stocked local business that countless Maplewoodians know and love, it will get a bit of a facelift, with new carpeting, ceiling and shelving.

In addition, Lundstrom will begin holding children’s classes at the Burgdorff Center in the spring. There will be Lego master building, Yo Yo master, magic, toddler yoga and more, all taught by certified instructors. “The Village and the Maplewood Village Alliance have been so supportive.”

The store will have a grand re-opening in the spring, said Lundstrom, complete with a visit from “Elsa” from Disney’s Frozen.

“I wish Erin lots of luck as she takes [the store] forward into the 21st century,” said Scrivener. “She has lot of good ideas. I feel confident she’s going to maintain it.”

The Scriveners started the shop on Baker Street in 1992, primarily as a store for baseball cards and comics. “They were very popular at the time,” he said. Eventually they moved to the current location at 178 Maplewood Avenue, which was formerly the site of a children’s shoe store. (Bit of local trivia: Norman and Joan, a born  and bred South Orange resident, first met at the old Stuft Shirt on Valley St.).

Customers kept asking for more merchandise. In 1996, Joan — ready to return to work after raising a family — took over day-to-day management. “It just grew, grew, grew,” said Scrivener. After Joan passed away in 2003, Norman decided to continue the store.

Scrivener’s managed to stay current by keeping its finger on the pulse of the community and the school district. Many of its employees were local mothers. Scrivener himself was deeply involved in town, serving on the Chamber of Commerce, the Maplewood Village Alliance and Dickens Village.

Recently, as he began to think of retirement, Scrivener had a conversation with Lundstrom, who was looking for a new venture. Rather than close the store — and disappointing legions of customers — he decided to sell the business to her.
“It’s to the benefit of the town to keep it open,” he said.

Julie Doran, manager of the Maplewood Village Alliance, thanked Scrivener for working to sell his business. “Scrivener’s has been a very meaningful place for an entire generation and their parents,” said Doran.

Scrivener said he has many good memories of running the store with his wife and family. He joked that his grandkids will miss the perks of having grandpa own a toy store. He feels proud of what he and his family accomplished. “It’s all about customer service,” he said, noting the liberal return police, and the free gift wrapping. “We did an awful lot of wrapping!”

He said Maplewood Village was an ideal location, with its steady influx of young families from New York City, and its walkability.

Scrivener said many people had expressed sadness that he is leaving, but “I’ll still be around.” Indeed, Lundstrom will be referring anyone with inquiries about coins and collectibles to Scrivener (who can be reached at 963-714-1986.)

“We will never cut ties,” she said.

Meanwhile, Lundstrom is looking forward to the future. She recently moved back to Maplewood and is living right in the Village. She gets a kick out of seeing children who used to come into the store years ago who are now grown up — some with their own children.

“I’m beyond excited,” said Lundstrom. This is my dream come true.”