On Wednesday night in South Orange, knitters will be raising their needles in preparation for political protest.

South Orange resident Christine Muccigrosso — formerly the owner of Café Meow on Springfield Avenue in Maplewood — is very fittingly hosting a Pink Pussyhat knitting party. The party was inspired by the Pussyhat Project, a movement and website with downloadable pattern that is encouraging women to knit pink pussyhats to wear to the Women’s March on Washington, D.C. on Jan. 21 in protest of the Trump inauguration. The hats are meant as a rebuke to Trump’s infamous live mic incident with Billy Bush in which he boasted about being able to “grab” women by their genitals without permission.

Muccigrosso and other local knitters will be donning their hats and boarding 16 Skedaddle buses at 5 a.m. on Jan. 20 to join the protest. Muccigrosso, now the mother of college-age children, says it will be the first protest march she has ever attended. 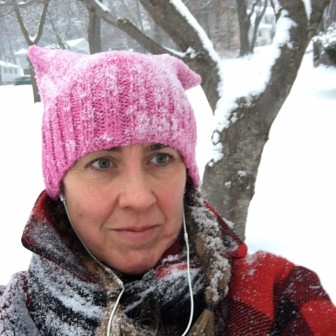 If you’re interested in joining the circle, email Muccigrosso here. Although new knitters are welcome, Muccigrosso asks that you bring your own yarn and knitting needles. The group will be meeting Wednesday, Jan. 11 from 7-9 p.m. Knitters can also bring a bottle of wine and a snack “if you want to share.”

For those who cannot make it Wednesday night and wish to make the hats, visit the Pussyhat Project website here and download the pattern.

Muccigrosso suggests altering the pattern somewhat: “I’ve been knitting them in the round and it goes much faster. And I’ve been making them a little smaller so that the ears don’t flop down. People are so clever — they are using different patterns, some are striped.”

Ultimately, Muccigrosso says, get creative with the hat, as well as political.