‘We Learn From Each Other Because of Our Differences’: Columbia HS Asian-American Student Alliance Leaders Speak at Vigil

Elizabeth Crofton and Joshua Lee are leaders of CHS’s Asian American Student Alliance. Below are remarks they made at Friday’s candlelit vigil to remember the victims of the Atlanta shooting, and to speak out against Anti Asian & Pacific Islander racism and violence.

Elizabeth Crofton: During these times where people are fueled by hate and minorities are being targeted, it’s important to stand together and support each other however we can. Our club focuses on creating that community within the walls of our high school. For the past two years, Josh and I have been leading culture-based activities and discussion lead debates so we can learn from one another. After all the best way to beat ignorance is through education and the means of education is taking the time to listen to our peers. We strive to build a space where we build each other up showing support and strength in the community. This sense of community should not be limited to one experience.

While Josh is Chinese American, I am half Filipino but white-passing. Our stories are not the same, our experiences not the same, but we learn from each other because of our differences. Our club welcomes all, Asian, half Asian or not. Because in order to learn we have to listen in order to educate ourselves on experiences that are not our own. In order to be truly woke, you must first admit you do not know everything.

The Atlanta shooting is only the tip of the iceberg when it comes to the ongoing conversation concerning violence against the Asian community. Today we mourn the eight lives lost that night, and all of the Asian lives that have been targeted due to their race. Today we stand as representatives of the future generations of Asians who challenge stereotypes and discrimination in the face. Today we stress the importance of being a community. 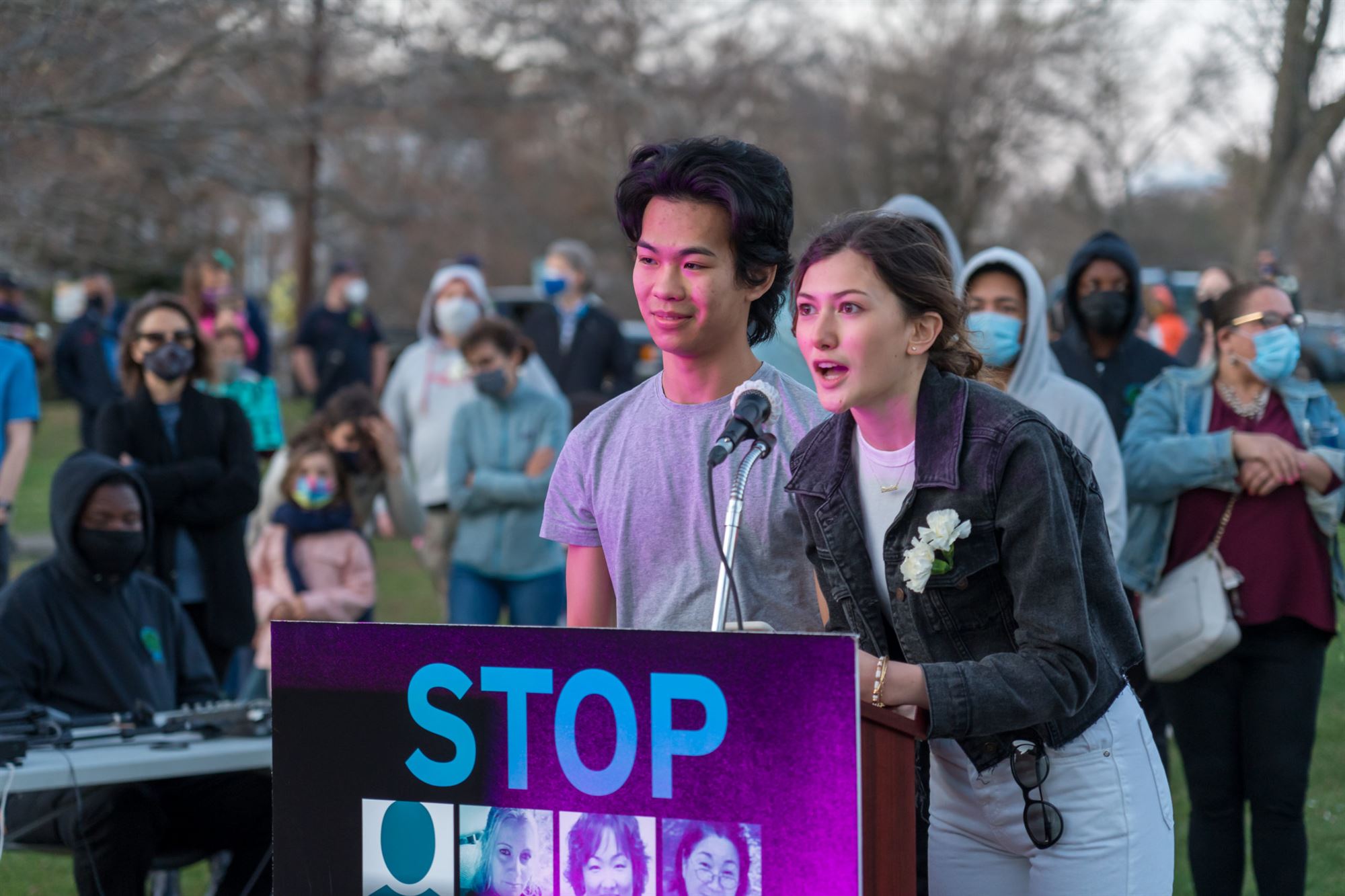 Elizabeth Crofton, right, and Joshua Lee spoke at a candlelight vigil held to commemorate the Atlanta-area victims and to call for an end to violence against the Asian American and Pacific Islander community on Friday, March 26, 2021. (Photo by Joy Yagid)

Joshua Lee is Co-President of the Asian American Student Alliance and a senior at Columbia High School.

Joshua Lee: At first glance, there seems to be a privilege to being a model minority. To a certain degree, I felt my Asian identity gave me a pass in most situations. At CHS, I could stride through the hallways during Period 9, never once to be stopped by an administrator with the accusative question “where is your pass?” I could walk into Starbucks at the end of a run practically naked in two-inch inseam shorts — nips and v-line exposed — to get a cup of water during the summer. Or I could be crossed at a police-ridden Underhill football game or homecoming dance and fly under the radar.

This sense of privilege started to falter at the beginning of the pandemic. The number of hate-crimes against Asian-Americans spiked, accompanied by sinophobic rhetoric and a resurgence of anti-Asian sentiment. This served as a dark reminder that the preconceived myth of the model minority was nothing compared to centuries-old racism remained the core of American perception of Asian-Americans. Any “model minority pass” can be nullified with America’s virulent history of yellow peril.

When the news of Christian Hall’s murder at the hands of Pennsylvania State Police flooded our Instagram stories, I was at first overwhelmed and confused. Like many, I was unfamiliar with police brutality against Asian Americans and individuals with mental illness. My knowledge of police brutality was mainly limited to the destruction of Black Americans brought to light during the BLM movement. What appeared to be an isolated incident was connected to an underbelly of oppressive systems that digests the bodies of all people of color.

When police officers murdered George Floyd — with the predatory, violent, criminal image of the Black male — they didn’t view him as human. When police officers murdered Christian Hall — with the submissive, asexual, castrated image of the Asian male — they didn’t view him as human either. Dehumanization is at the center of police brutality, of hate crimes, of oppression as a whole; it is the bitter bile that burns and digests our bodies. Racial characterizations, whatever side of the spectrum they are on, rob the victims of their humanity and the oppressor of their compassion. I’ve come to realize that whatever privilege the model minority myth offers can easily be dissolved by the acid of dehumanization.

Anti-Asian racism was not born out of the COVID pandemic because it has always existed. It’s now being acknowledged. Yellow peril from the beginning has turned the East into an oriental threat to the Western world. It has been used to justify imperialism and xenophobia and feeds into modern oppression. Recently, the pandemic has sparked the exponential increase in violence and has become the sick excuse used to justify it. To repeat the growing list of hate-crimes would be redundant and counterproductive. There’s no need to dilute the cause with repeating information, reducing the suffering of human beings to a few words in a list. Our town is quick to jump onto trends to align their online image with leftism.

As two organs united into a single community, the heart of MapSO is our shared school district. We pride ourselves as a diverse and progressive Garden of Eden, complete with a rainbow crosswalk and thousands of in-this-home-we-believe yard signs. But living here has taught me to look underneath this progressive plastic, and stare at the unforgiving systems of oppression.

As I grew, I began to see through the façade. I saw our organs poisoned by the serpent of inequality. I saw classes segregated through leveling, disproportionately leaving students of color in lower courses, and excluding them from APs. I saw more BlackLivesMatter signs than actual Black lives in the most affluent, whitest neighborhoods. I saw wealthy parents laugh about de facto redlining, chuckling behind closed French doors about the white Maple-good and the black Maple-hood.

What I believed as a child to be a paradise of diversity (and what many residents still do) was actually corrupted. I’ve learned systemic oppression is a cunning serpent, shapeshifting everywhere, seemingly progressive or not. And it reminds me that anti-Asian racism must exist in MapSO just as it exists everywhere else. It must exist behind closed doors, through whispers, on private stories, and within group chats.

The Instagram culture of MapSO is no different. Reposting the same four infographics as everyone else is the virtual equivalent of covering your profile in a progressive plastic. MapSO has taken one bite of the forbidden fruit from the tree of knowledge. And ashamed, they cover their asses in performative stories.

Maybe next week everyone will post a yellow square under the hashtag #yellowouttuesday and retire from their performance. Underneath performative activism, is there really anything to show?

I end this piece returning to two twin images, contradictory but born from the same womb of ignorance. The Asian model minority is just as two-dimensional as the image of yellow peril. The sulphurous caricature of disease and danger that causes eyes to water and nostrils to burn. The sulphurous caricature that clouds my external and internal complexity as a human being — complexity that lies even deeper than my raven locks of hair, and deeper than my skin that shines deep bronze in summer and rose gold in the winter.