The following story was reported and written by Lindsay Gross, Opinions Co-Editor of the Columbian, the award-winning newspaper of Columbia High School. She is a member of the Class of 2021. 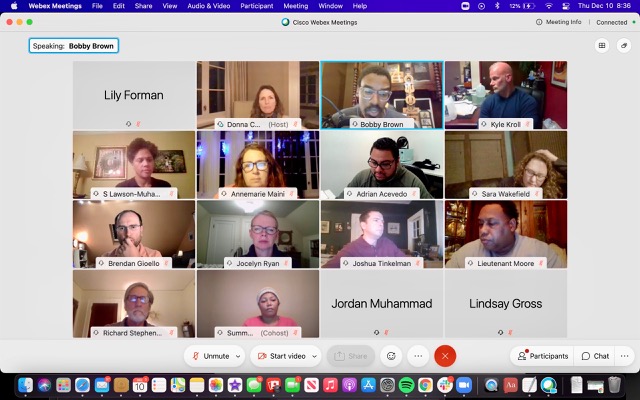 The South Orange Community Police Collaborative, an advisory group formed in recent years to give the community greater input on policing, discussed police use of force and training, as well as a collaboration with Seton Hall University’s graduate social work program, at its monthly meeting on December 10.

The meeting started off with Board Member Brendan Gioello going over data analytics. Gioello brought up the new executive order which calls for a statewide “strategies for implementation of a body worn camera solution for police departments.”

This sparked a discussion between CPC members Stephanie Lawson-Muhammad and Gioello, about how the implementation of body cameras will play out regarding their use and distribution. Lawson-Muhammad stated, “We shouldn’t have every police officer or police department trying to figure out what system they should use and what cloud storage they should use. I would want to advocate for a statewide solution.”

South Orange Police Lt. Adrian Acevedo responded, “In terms of having a product that’s the same everywhere—that’s probably never going to happen.” Acevedo explained that as long as all of the products have the same function, then a universal product should not be necessary.

An issue that came up in conversation with body cameras is the limited storage. Gioello explained all footage is not required to be stored. Acevedo added, “Right now [Essex] county is trying to have a local server system where all of these videos go to – and there are already challenges with it – how do these different products get the data to get to their systems?”

South Orange Trustee Summer Jones responded that in her work at Montclair State University, data is backed up to the cloud because storage is costly and the cloud also provides a system of disaster recovery. Lawson-Muhammad closed the conversation by stating that “a cloud storage solution from a cost perspective is immensely cheaper.”

Lawson-Muhammad stated that rather than exploring the existing data, she wants to directly call for new data to see how the data marries up with changes without training.

Annemarie Maini responded by questioning how relevant it is to collect data about training, saying, “I understand the need to understand where the training is coming from but I think it might be better to monitor the officer’s feeling of preparedness.”

Sara Wakefield added, “I would like to know the content of the training. What sort of training is happening in roll calls and whether that aligns with calls for service.”

South Orange Police Chief Kyle Kroll described how the public doesn’t really understand police training and how much of it is done during roll call. Kroll stated, “When we do use of force training, for example, I instruct up at the Academy for about three-four hours, I go over all these things, not just the use of force policy, but I go on things across the nation and how they’re going and where the cops messed up— what they should have done better, so forth and so on.” Kroll then added that he believes a solution to many policing issues is training on de-escalation.

Lawson-Muhammad responded, “De-escalation training by itself is not going to be a cohesive plan.” She said that she wants to not only reform the execution of the training but ensure that the training is effective.

Later on in the meeting, Board of Trustees member, Donna Coallier, shared a Care and Community Justice Partner Proposal. This is a joint project with Seton Hall professor, Dr. Juan A. Rios, DSW, LCSW, director of SHU’s Masters of Social Work program, and his graduate students, funded partially by Essex County. The main goals of the proposal consist of the use of social work and restorative processes to help residents and visitors suffering from domestic violence, homelessness, drug addiction, juvenile delinquency, mental illness, and police mistrust. Also, goals include supplementing the SOPD cultural improvements already underway by enhancing care and compassion values in the PD – and lastly, to develop practices that are data-driven and scalable to allow replication throughout other communities. This proposal essentially entails a new way to more proactively serve the community with social work, rather than rely solely on police force crisis intervention, said Coallier.

She added, “Data collection now in PD can be hard. If we find a way to make data collection better as a result of this project we can upgrade our ability to identify the issues likely to benefit most from our care and compassion approach and measure the efficacy of our service to the community.”

The topic shifted to police presence in COVID-19 restaurant violations and their involvement in these reported violations. Kroll believes that the police need to be involved at least initially to review with the prosecutors the level of violation. “I know that police have to get involved at least initially because it’s got to be related to the prosecutor’s office. The prosecutors need to review that with us to see in fact, whether it met the standard of violating—so yes the police would have to get involved in that.”

The meeting came to a close after Coallier stated her stance regarding police involvement in COVID restaurant violations. She said that in general police don’t get involved in COVID violations all that often. “Usually, Scott Egelberg, who is the Office of Emergency Management will come in and maintain the CDC guidelines—we handle it through the health department,” she said.

The CPC meets the second Thursday of every month; the next meeting is January 14 at 7:30 p.m. Find out more about the CPD at southorange.org.