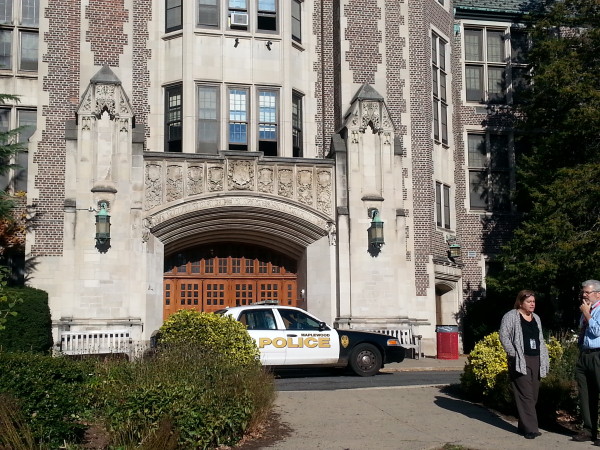 Update, 5:16 p.m.: Acting Superintendent James Memoli sent an email to the CHS community with further detail on today’s lockdown. The email is posted in full at the end of this article.

Update, 4:48 p.m.: Chief Cimino confirmed in a phone interview police are still actively looking for another individual they believe was on the property who may or may not be in possession of a weapon. This individual is an adult, and not a CHS student. “It is possible there was a weapon involved and various weapons were mentioned [by witnesses], but that is not a confirmed report,” said Cimino, who said investigators were still trying to clarify the information they were receiving from various witnesses.

Cimino said if anyone has any information regarding the incident, they should call the Maplewood Police Department at (973) 762-3400 and ask to speak to Sgt. Sally in the Youth Aid Bureau.

Update, 3:04 p.m.: Police Chief Robert Cimino confirmed that the MPD responded to a report from Columbia High School staff at 12:30 p.m. that there was an individual on the grounds who might have weapons, possibly a gun. “There was suspicion that a gun was involved,” said Cimino in the CHS lobby shortly after the lockdown was lifted and before he went outside to brief other press.

MPD dispatched all available officers, and the lockdown was called. MPD divided into search teams and coordinated with school staff. MPD called for mutual aid from the South Orange Police.

Based on staff reports, they located the student in a classroom with other students. He had a pair of brass knuckles; he had no other weapons. MPD arrested the student who is a minor, either 16 or 17 years old, Cimino said. MPD continued to search the school room to room before releasing the students.

The administration made periodic announcement to alert students to progress. Students were not dismissed early. All afternoon activity is continuing.

Cimino said they have not determined a motive and would not confirm Grierson’s statement that the student was involved in an argument with another student from another school. He said the Detective Bureau would continue to investigate the incident.

“I want to credit the officers and the staff for an outstanding response and we all feel fortunate that no-one was injured,” said Cimino.

Sometime shortly before 1 p.m. today, a code red was initiated at Columbia High School after it was reported that a student brought a weapon to school, according Susan Grierson, Asst. Superintendent of Curriculum and Instruction. Grierson said that the weapon was “not a gun.”

After Maplewood police cleared the school, students were returned to class after 2:15 p.m.

One parent said that students told her that the weapon or weapons may have included brass knuckles.

Maplewood Police confirm that there have been no injuries. Acting Superintendent Jim Memoli reports that all students are safe.

A code red “lockdown” was ordered this afternoon at Columbia High School by the Maplewood Police Department as a precautionary measure.  All students are safe and everything is under control.  Additional details will be provided as soon as they are available.

According to Grierson, the student may have had a disagreement with a student at another school who possibly was outside Columbia High School. Maplewood police have removed the CHS student from the school. Chief Robert Cimino and officers followed code red procedures: going door to door to check all rooms before clearing the code red.

Many students were outside the school because they were on lunch break when the code red was initiated.

News vans from Channels 7 and 12 arrived on site to cover the code red.

To the SOMSD Community,

Shortly before 1 p.m. today, a code red “lockdown” was ordered at Columbia High School. High school administration had been informed of a potential threat involving a CHS student and a former CHS student possibly involving weapons. The administration notified the Maplewood Police who then initiated the code red as a precautionary measure. South Orange Police were onsite to assist.

The police conducted an organized search of the building and one student was apprehended. The police continue to investigate the circumstances surrounding this event. Code red procedures were followed with police going door to door to check all rooms before clearing the code red. Many students were outside the school because the lockdown began during a lunch period. Security guards and administrators were outside with the students. Nobody was harmed during this event.

We appreciate the cooperation of the police departments, the staff, the students and the building administrators. Parents and guardians of our students can be assured that the school administration works closely with and cooperates fully with law enforcement during such an event. The safety of our staff and students remains our first priority.