South Orange-Maplewood Board of Education members looked to the NJ School Boards Association to provide some guidance and a path forward on July 22 during a retreat where the board confronted issues that have plagued some meetings and board interactions since January – with one Board member resigning in May citing a lack of collegiality on the board.

“The intent of tonight from my perspective is for this to be a conversation,” said Charlene Peterson, Field Service Representative of the NJSBA, who moderated along with NJSBA Member Engagement Director Ray Pinney.

Pinney added, “I think the conversation should be how you’re going to move forward. Sometimes you spend too much time looking back.”

But before moving forward, Board members clearly had some past issues that needed to be resolved. Some board members talked about feeling silenced and disregarded by the majority; while some others said they felt distrustful of others and wanted dissenters to come with solutions, not just disagreement.

Board members seemed to hold differing concepts of how much should be decided before a board meeting – in committee – and looked to NJSBA reps to provide guidance. And Board President Thair Joshua asked for guidance from Peterson and Pinney to help him address questions and concerns about his role as president of the board.

Before opening to comments, Peterson presented a slide show that stated in part: “Sometimes individual trustees find it difficult to find common ground with fellow trustees. It is extremely important for the board to take the time to work together to forge professional, respectful relationships.” 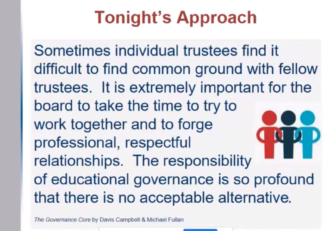 The two areas that scored the lowest for the board as a whole were planning at 1.7 and performance at 1.7.

Notably, board members scored themselves highest as individuals. Peterson said this was not atypical with boards and reflected an attitude of “Basically it’s not me; it’s all those other board members.” 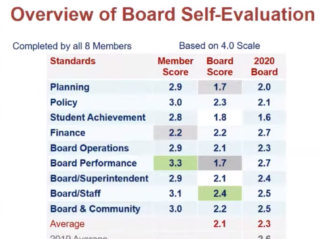 Peterson noted that the BOE’s self-evaluation scores had been trending down each of the last three years.

BOE 2nd Vice President Erin Siders explained it as follows: “Individually I think we are effective but when we come together that’s where things seem to fall apart. I’m not sure how we can … at least be able to respect each other’s opinion.”

“We don’t seem to do that as a board,” said Siders.

BOE member Annemarie Maini brought up “this idea of what does this idea of the majority of the board mean and how do we use that term to move the work forward and what does that mean for people who don’t agree with a particular majority on a particular path. I think that really needs to be discussed because I think we all have a different opinion about what a majority means.”

BOE Member Elissa Malespina picked up on that thread: “Annemarie just made the point about the majority, and respecting the majority and when the majority tells the other members that, ‘Well, we don’t really care what you say because we don’t need your vote. We already have the votes’ – which has been said to me and to other board members – I think it makes it hard for us to come to a consensus and feel like we can feel respected.”

“I do believe that we each are really passionate about this position and diligent about the work and care intensely about the issues,” said Board member Susan Bergin. “And it’s when we all come together that we have a hard time getting sort of like past our individual ideas about things to come to some sort of group idea. And I think there’s a definite lack of trust going in multiple directions on the board that’s contributing to that.”

“I think what was more surprising to me with some of the language used in the comments,” said Board President Thair Joshua about trust and not feeling respected. “That definitely showed in the supportive comments, so I’d like to have a discussion about that this evening, if possible.”

Board member Courtney Winkfield added, “There’s a theme throughout the comments about trusting in confidentiality and trusting the conversations that we have that are of a sensitive nature, whether through writing or through executive session remain private.” On another topic, she added, “Sometimes it feels like we are so far apart on issues and in particular doesn’t feel as if the dissent is often voiced in a way that feels solution oriented. And that can feel very hard to find common ground.”

First Vice President Shannon Cuttle said they believed  “all of us are here in good faith with good intention on putting students first, with passion and purpose … but perhaps we haven’t had the cohesion and the space to be able to come together to hear from each other in a way that’s open ended, to be able to come together to be able, to be wanting to be open minded and listen and also be forward thinking and not be proactive to help collectively together, find the solutions for us to move forward.”

A Unifying Cause or Project

Chris Sabin, a former board member who was selected to fill the remainder of Kamal Zubieta’s term (Zubieta resigned in May citing and “exclusive inner circle” and an atmosphere of bullying) suggested that the Board might be able to come together if the members could find one common task to work on. He noted that the board was more united when he served and the BOE was working to approve bonds for the Long Range Facilities Plan.

“Everyone was working on the bonding together. Ideally if we could identify one thing for the rest of the year and get it done…” Sabin posited fully enacting the Amistad curriculum updates as a central unifying idea. “If we can do that we would all be proud. … Let the superintendent mandate that there is something we get done.”

Johanna Wright echoed others in saying, “I think we probably are on the same page, more so than you think that we are,” but added, “I find that we are a completely dysfunctional board.” Later in the meeting, she called it a “bullying board.”

“I think what needs to happen for us at this point is that we need to understand the role and the responsibilities of a board member, we need to understand the role and responsibility of the President,” said Wright, “and I think because we’ve been in this pandemic and we haven’t been able to get down to Atlantic City, to learn the kinds of things that we need to do and then we ought to be a part of and how we ought to be doing things.”

Peterson counseled the Board: “You don’t get to pick who your fellow board members are, so you may not like them, you may have run against them in heated campaigns, but once you get on this side of the board table, you are one team. … So you have to… as a board … make a conscious choice. Do you want to govern as individuals going in different directions, or do you want to govern as a team” coming together for a common goal?

She added, “This board has always made a commitment to training together. I think I’ve been with NJSBA eight years now and I don’t know that I’ve spent more time with another board.”

Separated by a Pandemic

Malespina and Joshua both noted that the meeting for the superintendent’s evaluation was one example where the BOE was “collaborative, it was collaborative in nature and we were laughing and joking and getting along,” said Malespina. She noted that Board members were suffering from a lack of human connection due to the restrictions of COVID-19.

“I feel like we honestly, we have all not been in the same room together ever since we’ve been on this board through the pandemic through different circumstances, and all of that. And I know, I almost am like, we need to go and get a drink or something. … We need a time where we can … be together to learn about each other outside of just a committee.” Peterson said that the board could meet in a more informal setting (one president of another board that Peterson has worked with hosted a meeting in his home); but that a meeting with any quorum of BOE members would need to be publicly noticed.

Preparing for Board Meetings

This seemed to touch a central point of contention between board members, with Siders saying she thought she was supposed to come with her mind made up, and Malespina saying she wanted to be able to raise questions and have discussions at Board meetings before voting.

Siders said that board meetings felt like “gotcha” meetings, with members “trying to force people to change votes on the fly based on information we didn’t know ahead of time.”

Malespina countered, “I’m struggling to find a way that concerns can be raised and it can be acknowledged at least.” She said that she would send emails but then be told she sent it to late or that “your voice doesn’t matter because we have the votes so why even bring it up.”

Joshua asked how much work was to be done in committee versus public meetings. Peterson said that the board could decide that “the most effective way that you can do your work or have your work done is to work through standing committees,” but that ultimately the committees’ responsibility is to make recommendations to the board.

Interestingly in light of emails that have come to light related to the resignation of Zubieta, Joshua asked for some guidance on emails. Peterson noted, “Reply all is the default in work life [but] not at the board of ed.”

“If the majority of the board is involved [in an email] that can perhaps be construed as a meeting, ” said Peterson. “We have to be mindful of that, It has to be one-way communication.”

After a productive meeting, Peterson said the board would get more specific on how to move forward at subsequent retreats.

Earlier in the meeting Wright had said, “I think we’re going to need a retreat after the retreat after retreat. That’s how much trouble we’re in. And I think that unless we jump on it and we do the things that are necessary, it’s going to be bad.”