Jeffrey Bennett is a member of the South Orange-Maplewood Board of Education. The views herein are his own.

As the economy improves, the population grows, and monthly rents soar, developers will show increasing interest in South Orange-Maplewood for new apartment buildings and townhouse projects.  As taller buildings potentially loom over our sidewalks we are sure to see more controversy around higher density development’s effects on our communities’ streetscapes, traffic, and neighborhood character.

The thirteen complexes listed above have no tax abatements and a combined property assessment of $178.6 million.  At SOMA’s 2% school tax rate, they pay $2.77 million in school taxes.  These thirteen complexes – that house only 0.6% of our students – therefore pay 2.6% of the Local Tax Levy and 2.4% of the operating budget and are immense budgetary helps for the school district.

The exception to high-density development expanding the tax base is when the property has a long-term tax abatement called a PILOT (Payment In Lieu Of Taxes). When there is a PILOT, the school system can normally only tax the land that a complex owns but it cannot tax the “Improvement” (i.e., the building) itself. The exception to this is 3rd+Valley now rising in South Orange, whose land taxes are abated. This means that complex, which will have 215 apartments, will contribute nothing toward the schools.

In a PILOT the amount of money paid to the municipality (and county) increases gradually, but the school system gets no taxes on the Improvement until the PILOT expires, most commonly in 30 years.

Even though PILOTed buildings are not taxable real estate, the tax assessments are calculated and are publicly available.  Maplewood Crossing, the Avenue, Gaslight Commons, and the Gateway combine for $85.3 million in assessment.  If these buildings did not have PILOTs they might not have been built in the first place, but if they were built and they paid full school taxes they would pay about $1.7 million to the schools.  In reality, these complexes only pay about $154,000 in school taxes on their land, not even a tenth of what non-PILOTed property of equal valuation would pay.

In the case of the PSE&G/Avalon Bay property, the schools’ tax base is narrowing, since the PSE&G building itself was taxable real estate. However, it should be noted that a narrower tax base due to PILOTs doesn’t mean that the school system gets less money, it means that the taxes are shifted to other SOMA taxpayers.

There are 35 children living in the Avenue, Gaslight Commons, the Gateway, and Maplewood Crossing.  There is no straightforward way to calculate the marginal costs of educating those children, but it would be greater than what the schools get in land taxes from the complexes the children live in.

The student numbers from current PILOTed buildings may be manageable, but after 3rd+Valley and Avalon Bay are built the number of children from PILOTed projects and their associated costs will surely increase.

Although PILOTs do not enlarge the school system’s tax base and can even shrink it if a taxable Improvement is demolished, the status quo allows for an imperfect, indirect solution: when the South Orange and Maplewood municipalities get large amounts of money from PILOTed buildings the municipal tax increases are smaller, thereby giving the Board of Education more “room” to increase taxes above 2%.

Even though the number of children from high-density development is small, the schools are beginning to have acute space problems, thus the contribution from any new development should be examined.

Since 2006 the schools have seen an 800 student population increase, increasing from 6,074 to 6,859.  The number of students living in the Tuscan Elementary School zone, for instance, is now consistently above what the school can accommodate, forcing late-registering Tuscan-zoned children to attend other elementary schools.  If the population continues to grow eventually the school district will have to rezone elementary schools, buy classroom trailers, and even build additions.

However, while new developments only exacerbate crowding problems they do not primarily cause the problems. The 800 student population increase is overwhelmingly from the existing housing stock, meaning it is caused by more empty nesters and singles selling their houses to people with school-aged children.  It is not unreasonable to focus on the contribution from new development since that is something the towns have some control over, but new developments are minor contributors overall. Since the financial impact of new housing is proportionally greater than population impact, without new development we would have only slightly less intense space pressure, but much more intense budget pressure.

For me, what tilts expanding the tax base through high-density development from being manageable to being necessary is the sheer size of the budget deficit the schools are facing.

By 2020-21, according to the South Orange-Maplewood School District’s Business Office, if taxes continue to increase at 2% and various other factors like state aid hold steady, the school system will have $20 million deficit.   Since Trenton is indifferent to the fiscal problems of suburban districts, this means there is not a likely prospect for additional state aid and a continuing erosion of educational services is inevitable. 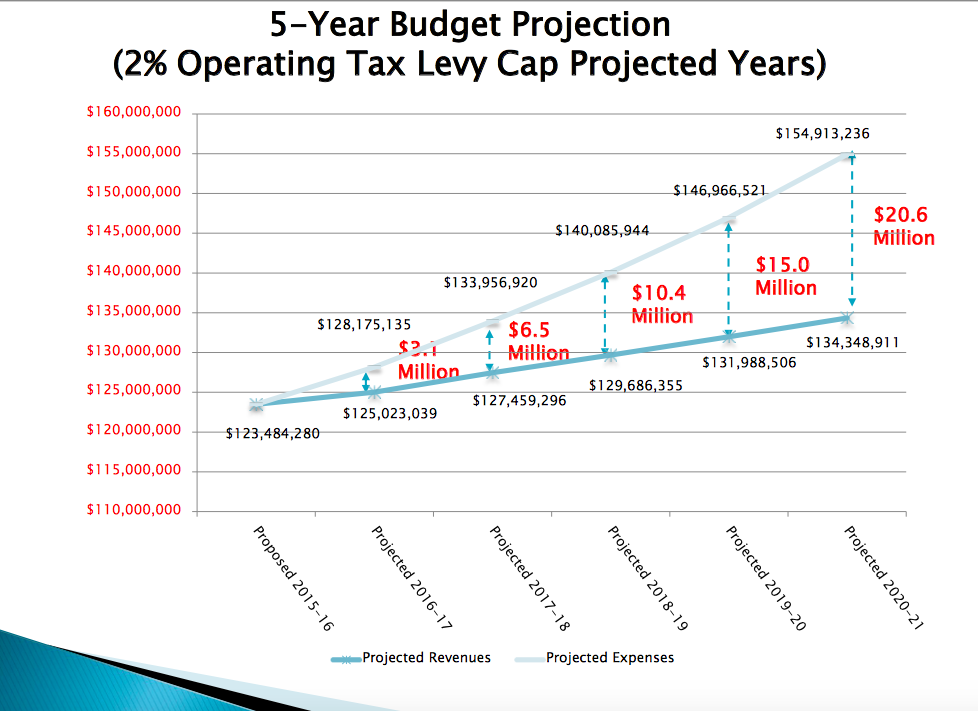 How large a contribution could high-density development make?  Not as large an amount as the state aid we lost in 2010, but still quite a large one.  The Top has an assessment of $33 million.  It pays about $660,000 a year in school taxes and has no more resident children than live in a regular house. The next time you see The Top do not think of the building itself, think of the eight teachers whose salaries its residents pay.  Could we accommodate more high-density buildings?  If there is no PILOT or the PILOT will be short-term I think we need to.

New development is only part of the solution to our budget problems, but that doesn’t mean that it isn’t necessary.  New development, unlike some of other “big fixes,” such as restraining health care cost growth, restraining Out of District tuition growth, and getting fair state aid, is within our own control.

At this point the Board of Education, Maplewood Township Committee, and South Orange Board of Trustees need to have to have better exchanges of information about new development, including a discussion of why some complexes contribute more children than others do and revenue sharing from PILOTed properties.

Although denser development changes a town, so does having a school system with deteriorating programs.  I would rather our community’s character change through the construction of more density, even high-rises, than see an even faster deterioration of educational quality. Simply put, to maintain our schools as high-opportunity schools we need a larger tax base.

(The source for student numbers is the SOMSD Business Office.  For security reasons building-specific numbers will not be released.  The source for tax assessments is a public database here.)