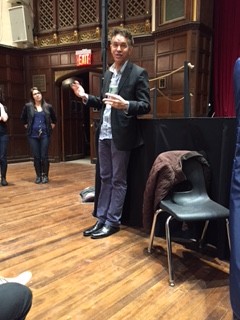 Tony Award-winning Brian Stokes Mitchell is known for many things. Countless television roles, his rich and elegant baritone singing voice and let’s not forget holding a coveted spot among People Magazine’s most beautiful. But today he was a Broadway star hanging out with Columbia High School’s cast and crew of Ragtime.

Mitchell was nominated for a Tony for his critically acclaimed portrayal of Coalhouse Walker in the original Broadway production that ran from 1998-2000. The story tackles big themes such as racism and the changes our country faced heading into the first World War. It follows three groups: African Americans in Harlem, a family in the NYC suburbs and immigrant Jews just off the boat from Eastern Europe.

Mitchell talked to the Columbia students about how the music from the era was so pivotal. Ragtime takes place during a time when jazz was being blended with more traditional styles such as big band and marches. Music was a representation of what was going on in America, a melding of cultures.

One student asked him how he prepared for the role. Mitchell said that he read everything he could find. He read the script twenty times, articles about the time period and the novel written by E.L. Doctorow in 1975. He also analyzed each song, making notes and highlighting the rhyme schemes. He referred to advice he was given by one of his acting teachers: “Your first obligation is to the playwright.” 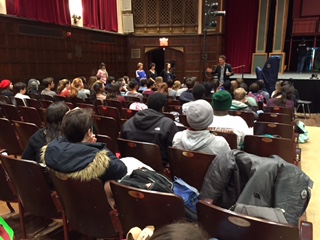 Mitchell also had sage advice for the actor playing the part of Coalhouse in the CHS production: he told him to choose love as his motivation – “Your character should not be angry because he is a bad person, he should be acting out of the love he feels for the people he wants to protect.” He also said how important it is to draw from your own experiences and bring that to your character. Most importantly, he said, is to practice. The more comfortable you are with the material, the more natural you will be on stage.

As for bringing Ragtime to Broadway, Mitchell was there from the beginning. The director approached him while he was working in a different show. The writers were still honing the book and songs when they started rehearsals. Mitchell had a chance to be a part of the process and have input in the final product which was very rewarding for him. 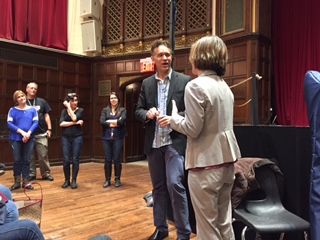 Columbia’s rendition of Ragtime should prove to be one of the meatiest productions it has ever tackled. The play opens Friday night.

For more information about Brian Stokes Mitchell check out his website – www.BrianStokes.com

Enjoy our photo gallery below; click on any photo to begin.