‘Close the Tabs and Open the Schools!’ Families Rally to Support the Safe Reopening of South Orange-Maplewood Schools

South Orange Middle School student Mary Donohue is holding a homemade protest sign which features the image of a bright orange laptop with a large slash through the center. Look a bit closer and one suspects Donohue put quite a bit of elbow grease into her black Sharpie that she used to create that heavy slash. 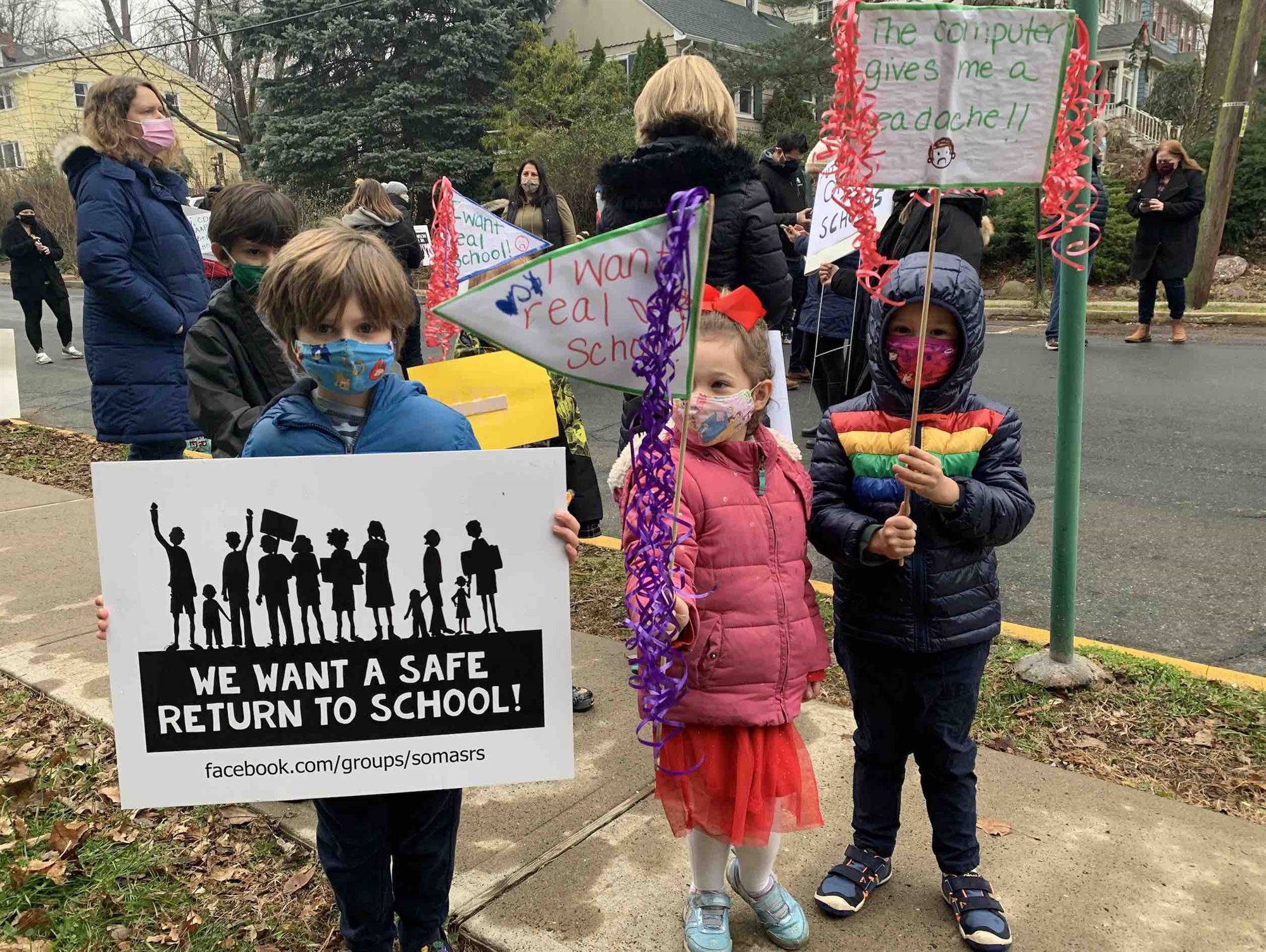 “I want to close the tabs [on her computer’s web browser] and open the schools,” said Donohue, who tells us she has an IEP (Individualized Education Plan) and is struggling deeply to maintain her focus at home. Donohue clearly has a bright, warm visage under her mask, but she is also desperate to return to in-person learning in the South Orange-Maplewood School District. 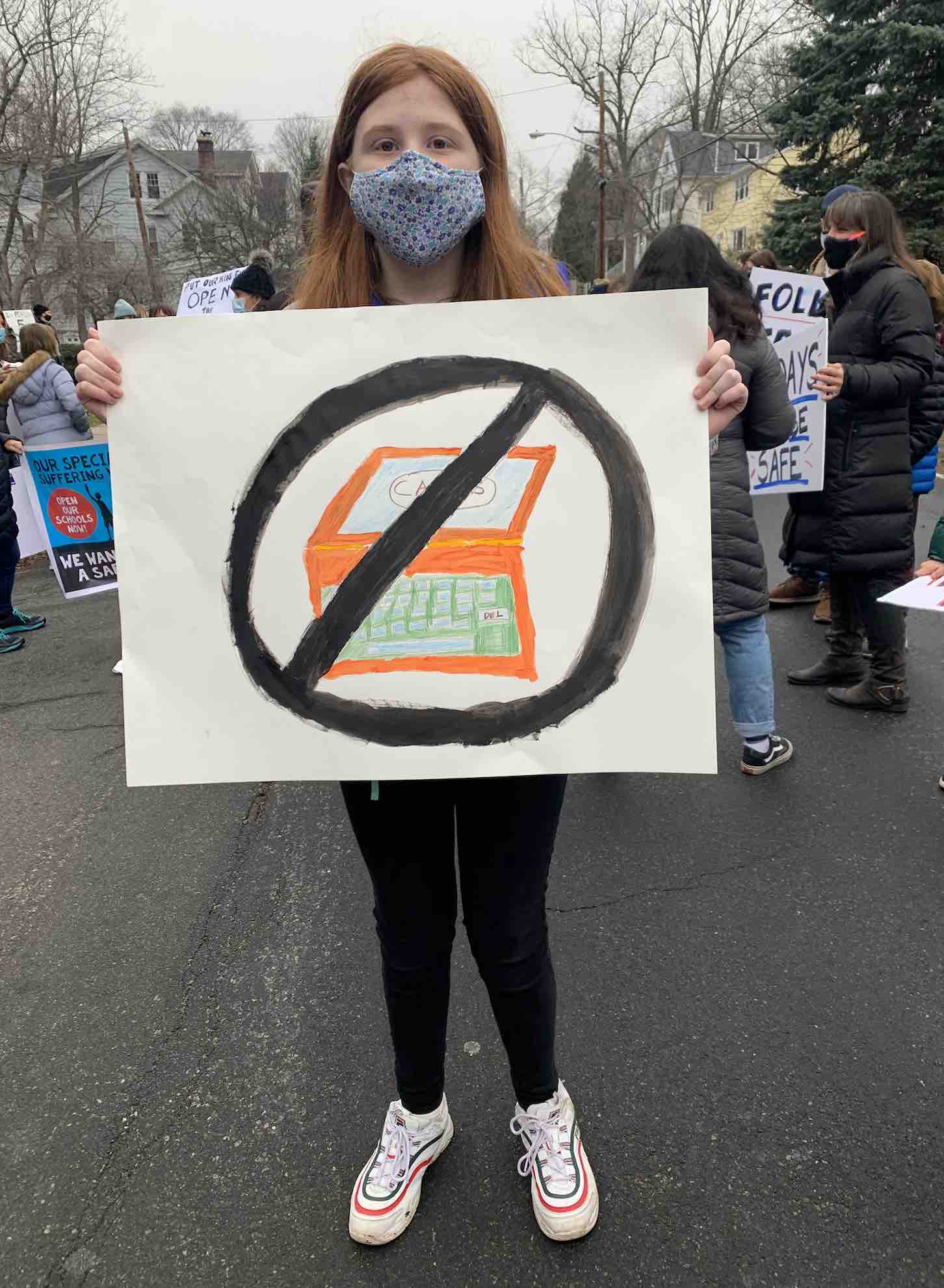 Donohue is one of scores of South Orange-Maplewood community members who turned out for the rally, which began at the district’s main office at 525 Academy Street and snaked its way down Parker Avenue, passing by Columbia High School, and ending at Assemblywoman Mila M. Jasey’s office on Valley Street.

The sound of cheering and chanting rally goers was occasionally punctuated by honking car horns. By the looks on the driver’s faces, many were enthusiastic supporters of the rally. One driver cruising down Valley Street rolled down his window to offer supportive words to the marchers in between leaning on his car horn.

The rally capped off a busy week for SOMA For Safe Return to School (SSRS), a Facebook group started by local parents Julie Fry, Kate Walker, and Jill Ranieri Ryan just a little more than a week ago. What started out as a petition has grown into an organized community movement that includes families with children of all grades and levels, children with special needs, and thorough discussion about the science-based research which they believe justifies returning to school on January 19, 2021.

“Many local public and private schools, following CDC and state guidelines, have been running for months without major issue,” the group founders write in their petition. “Notably, the YMCA is operating smoothly in our school buildings. Even when cases do occur, the testing, tracing and quarantining process used in other districts has been proven sufficient in limiting in-school spread. To ignore all of this evidence is to further children and families’ suffering with no rational justification.”

“All of the science is telling us that it’s certainly safe to bring elementary children back into the classroom,” said Ryan, who has two children with IEPs. “I see that my neighbors, my friends, and their peers are struggling as well. I have noticed a reluctance for people to stand up and say so. We have to raise our hands and come out.

“There are so many families worse off than mine. I’m trying to be a voice for them, not just my own kids. I think there’s a sense that we’re selfish – but we’re not. We’re here for teachers, we’re here for special needs kids, and early learners.” 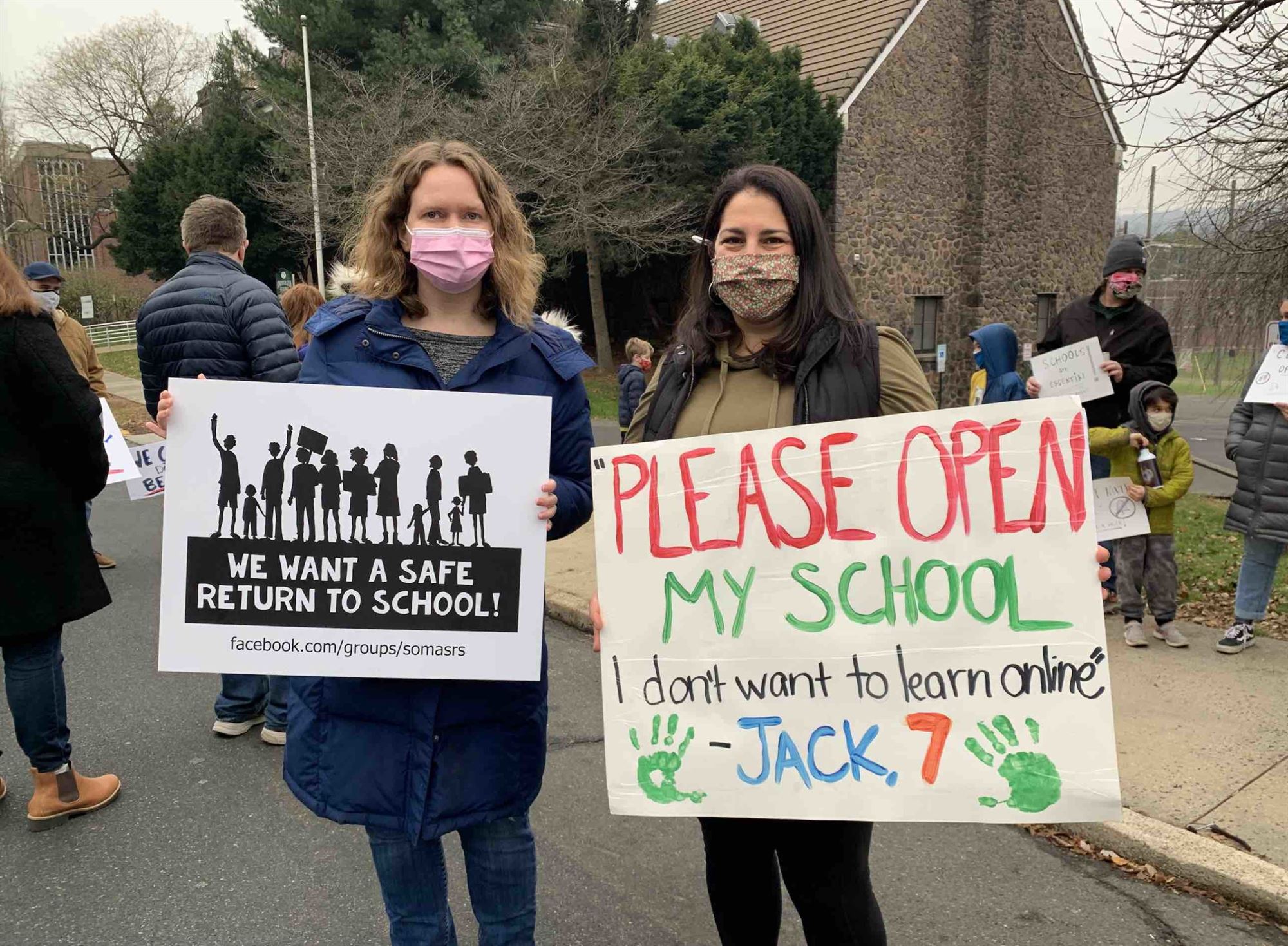 Julie Fry and Kate Walker, co-leaders of SOMA For Safe Return to School. [Photo by Donny Levit / The Village Green]

Walker said the petition and group formation took place after finding like-minded community members on social media. After she and Fry connected over the summer, they decided to take action “because it just felt the time was right and we had some momentum. It has been a little bit of a hard thing to get people to talk about … but I think that’s how it started – realizing there are actually a lot of us.”

Fry said national events over the summer “made this a really polarizing political issue instead of science-based, practical conversation about how to get the schools open. “…if you brought up wanting to get your kids back to school, people started questioning your motives, your identity, and whether or not you cared about people. People have said really awful things to people who’ve spoken up about this. I think that has really silenced a lot of parents.”

Dr. Koleen McCrink, an associate professor of Psychology at Barnard College who is a Maplewood resident and parent, told the rally goers that many groups — including the American Academy of Pediatrics, the CDC and epidemiologists — emphasize the critical role that in-person school plays for young children. She noted the growing consensus in the scientific literature that “elementary school safety can be achieved with far more reasonable measures than schooling for older children.” McCrink said  SOMSD leadership is “failing our elementary school children and their families, by not being responsive to the latest science on COVID-19 in young children, and by not being creative in incorporating solutions that go beyond the outdated hybrid plan developed six months ago when we knew far less about the disease.”

“…I urge the administration to push back against this unfounded resistance to a five-day plan for our children,” said McCrink. ‘We need better choices than the hybrid and remote options currently offered, and we need our faith in the management of this school system to be restored.” 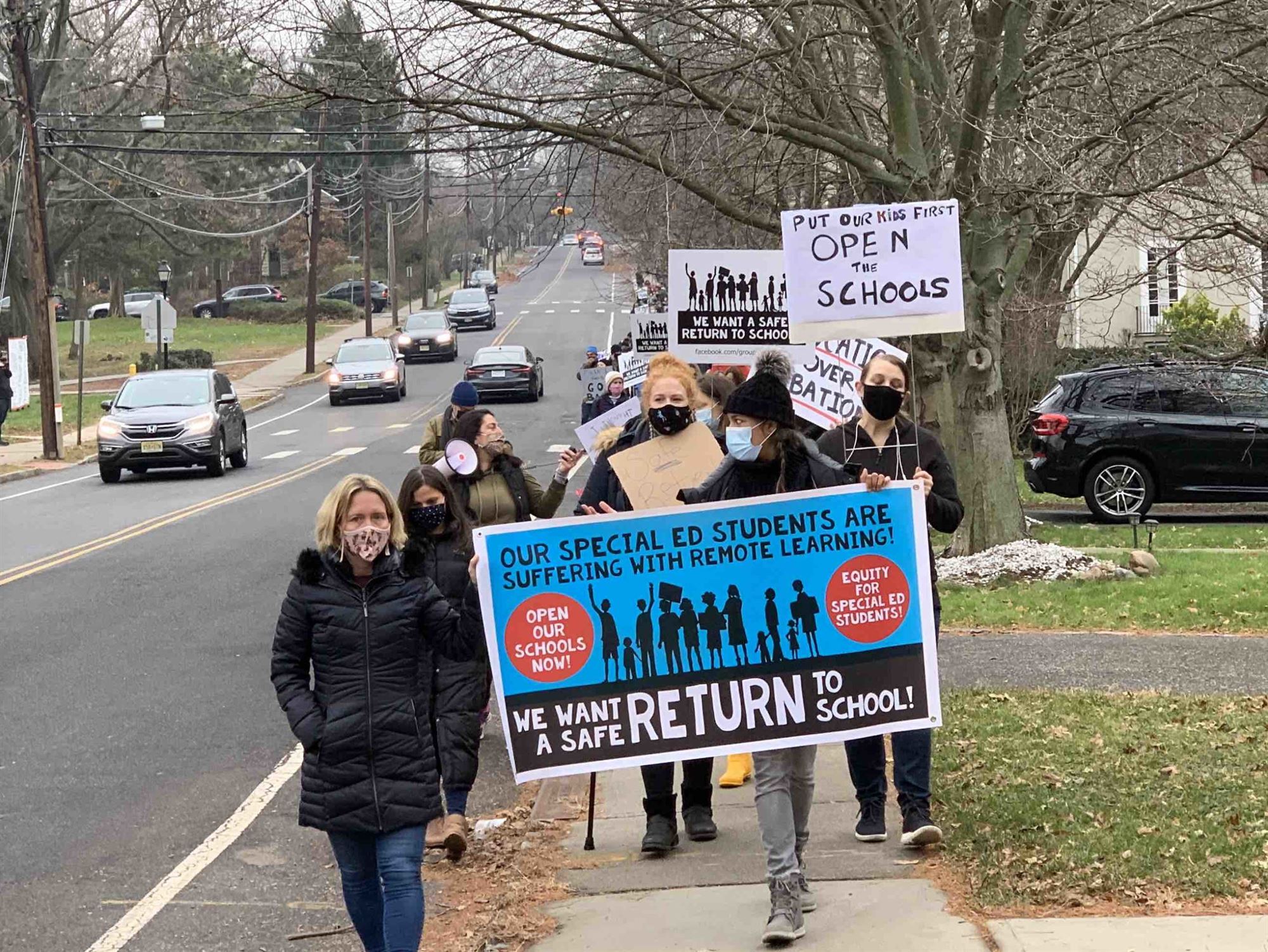 Beyond focusing on the science behind the call for in-person learning, the rally also highlighted the immense stress and emotional pain that virtual learning has caused students and parents. “My son requires constant re-direction and one-on-one assistance to do his lessons,” said Kristen Hartley, visibly choking back tears. “I am juggling my full-time job, his schooling, his tutors, and his therapies alone. I am working every day until one in the morning. My son was just privately evaluated and due to the year that he lost plus this past year of virtual, he is now a second grader with the learning capabilities of a late kindergartener. And he is not the only one.” 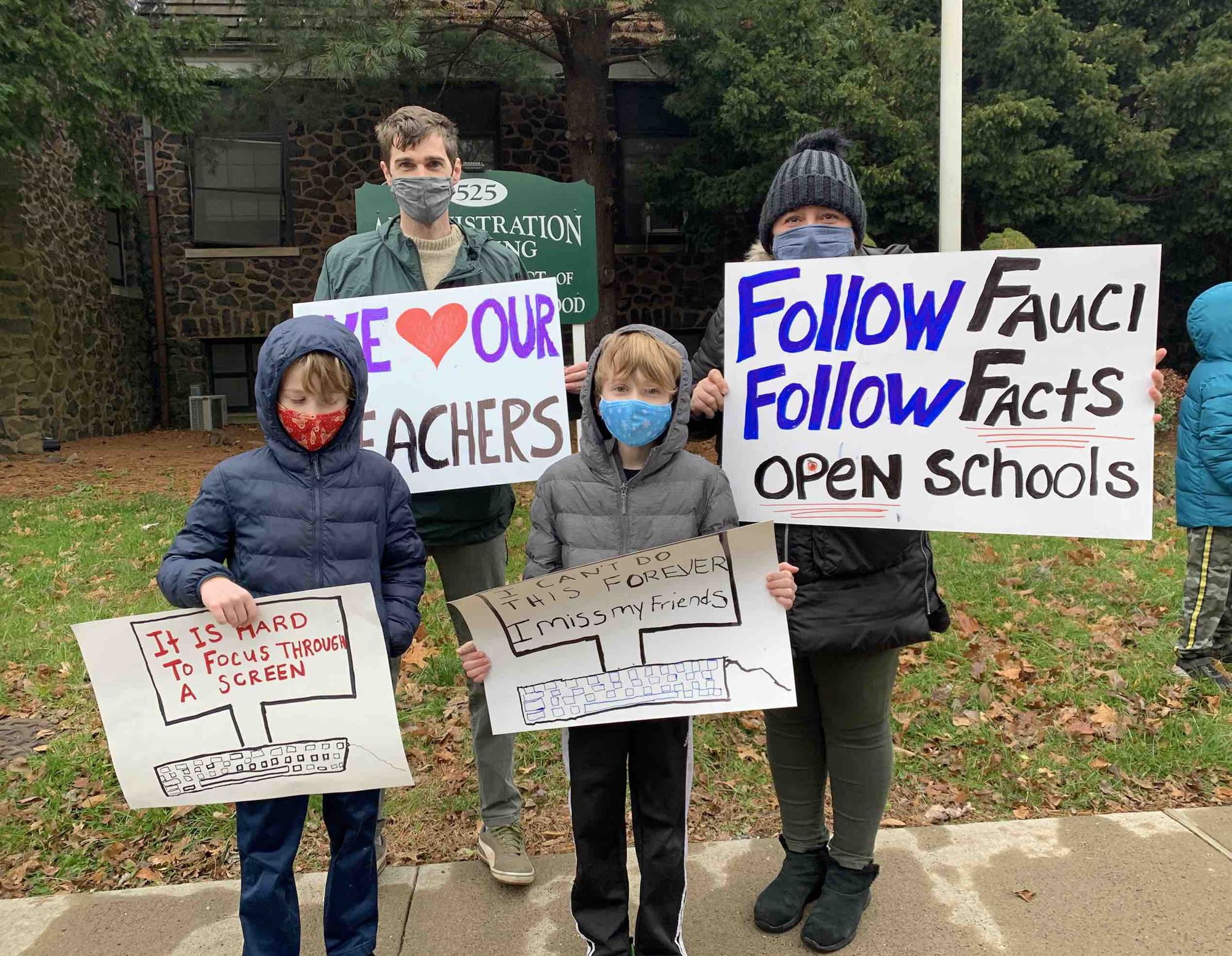 The Ryan Family. [Photo by Donny Levit / The Village Green]

Members of the group note that the scientific understanding of COVID has evolved since the initial hybrid plan. The group is trying to build support for five-days-per-week in-person schooling for elementary and special education students by the planned date of January 19, 2021.

“We’re dealing with such an information void for such a long time,” said Michelle Campana Sullivan, an SSRS member. “My perspective is that it’s really evolved with the information that we’ve been getting from other districts and other countries where they have opened and haven’t been seeing the in-school spread. The path forward back in August is not necessarily the same as it is now. And I think that that type of flexibility and analysis is critical and that’s what I expect to see from our district.”

Michael Ferguson, a parent of a kindergartener and a second grader with an IEP at Marshall School described how his children complain about their screens: “They say [the screen] hurts them – and it’s physically difficult to watch that.” Ferguson said he tells his children it will “wear off” eventually. “But now it just feels like it’s permanent to them. They’re discouraged, they’re sad, and in some cases – depressed. I think some parents are a little upset about what they perceive as maybe half-hearted attempts to reopen safely.”

The district communication has been a source of struggle for members of the SSRS. “Without transparent communication, [parents] hear the rumors,” said Campana Sullivan. “The district may be doing more behind the scenes, but it’s just not being communicated. Parents need the opportunity to make plans for their families to figure out what life might look like in January.” 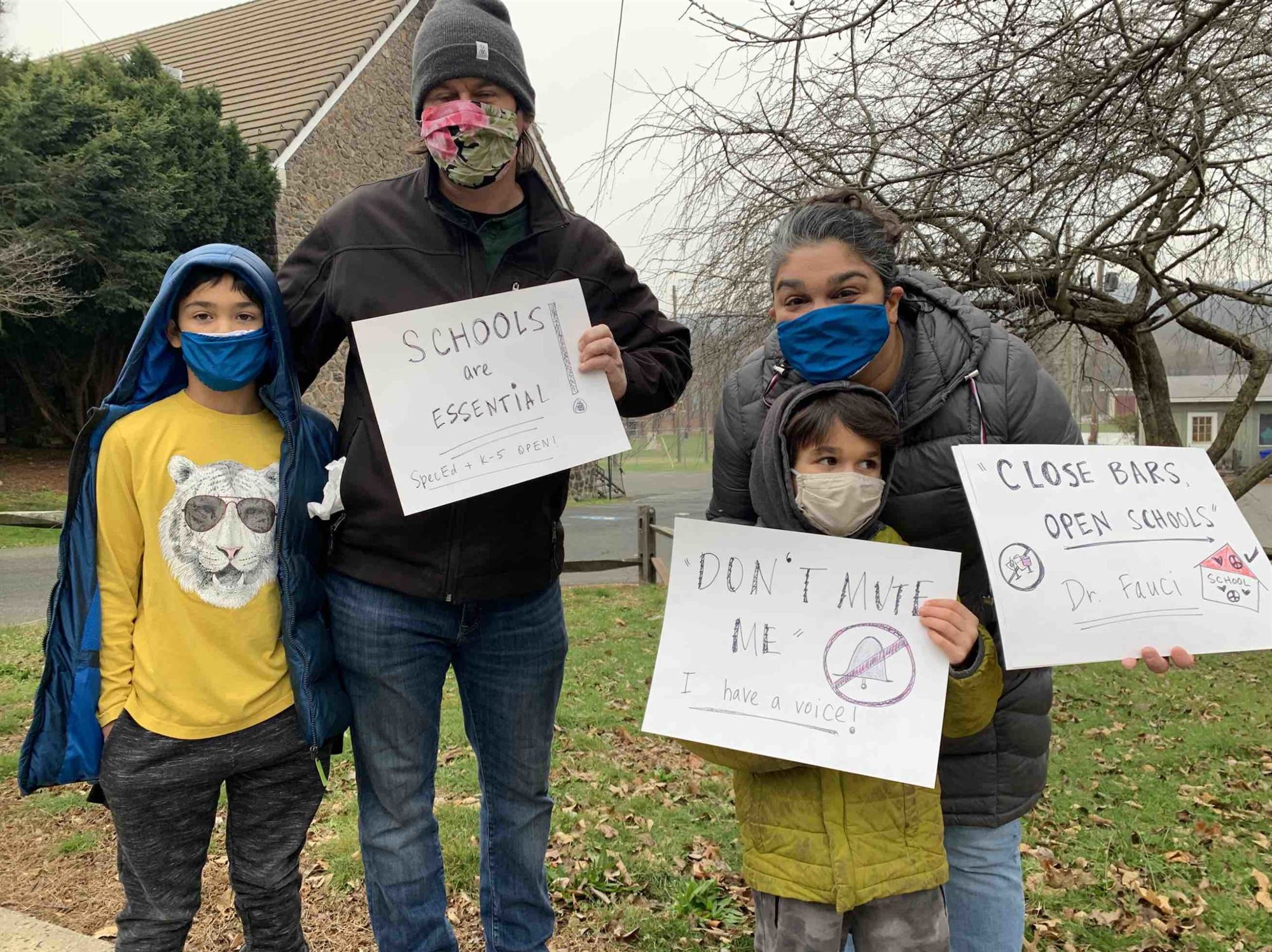 The Wolfe Family. [Photo by Donny Levit / The Village Green]

When viewing the new SSRS website, perhaps the most potent piece of data comes from the prominently displayed countdown timer which notes how long it has been since SOMSD has provided in-person school. At the time of publishing, the countdown timer reads 274 days and 18 hours.

With in-person school, children are “learning to be learners,” said Kate Walker. “They’re learning how to be in a classroom. They’re learning social behavior and emotional development that you just cannot replicate anywhere else. Nothing can replicate [being in person], and the damage is being done to a whole generation. And it needs to stop.”