Columbia High School students — who had been separated into three groups, or cohorts, for hybrid learning — will be consolidated into two cohorts as the district moves to bring them back for in-person learning that had been halted more than a year ago, Principal Frank Sanchez said Monday.

“As I mentioned earlier, I have been trying to consolidate the three cohorts into two so we could have more in-person time at Columbia,” Sanchez wrote in an email to parents. “To do that, we have to make the changes in PowerSchool in real-time, and so I had to wait until new transportation routes for our new hybrid students were created, the third marking period grades were completed, and attendance was taken by staff today [Monday].”

The schedule Sanchez shared shows cohort 2 returning to classrooms on Monday and Tuesday of this week, and cohort 3 returning on Wednesday and Thursday, with Fridays as asynchronous, or non-live virtual learning. 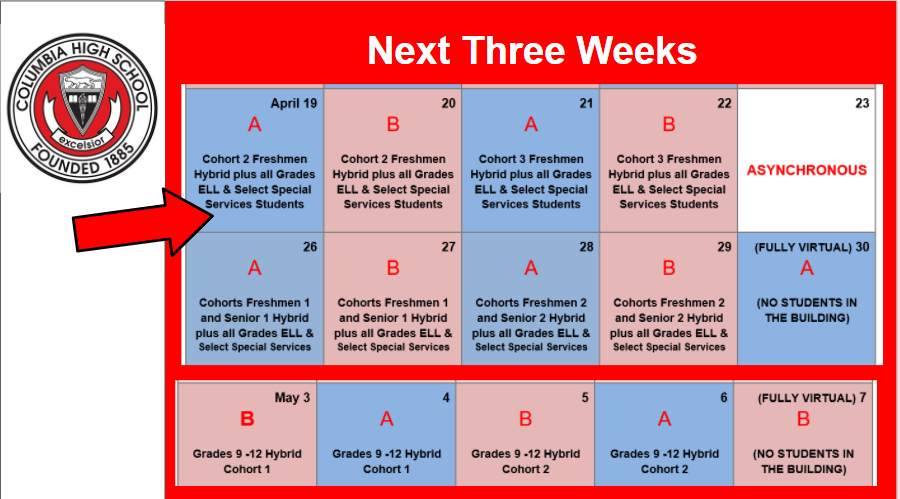 The following week, beginning April 26, brings cohort 1 ninth-graders and seniors back to campus on Monday and Tuesday, with cohort two on Wednesday and Thursday. Friday remains asynchronous as part of Phase 4.

Monday-through-Thursday classroom instruction begins May 3 for all CHS students.

Sanchez said that he had planned to begin the consolidation process on Tuesday, but thought to share the information as it stood after remarks Board of Education member Elissa Malespina made during the BOE’s regularly scheduled meeting on Monday.

“At least the high school parents, we have no idea what cohort we’re in,” Malespina said a half-hour into the five-hour meeting, adding that she had heard similar concerns from other parents.