“As we’ve seen from our elementary schools these large projects take time to be approved, even though the funding has been approved,” Taylor said at the most recent Board of Education meeting, acknowledging that he had heard from a number of families.

Taylor’s comments were in response to Glenn Minerly of the MAPSO Recreational Fields Taskforce, who had urged the Board of Education to speed up work on the two athletic fields.

Minerly argued during the public speaks portion of the meeting that Underhill is “simply unsafe” and that it is well past its expected life cycle.

“Might I remind the board how last year, we had to cancel a series of varsity events because a visiting team refused to play on the field citing field conditions,” he said. “It’s well known this district has had to deal with myriad lawsuits in the past decade. An injury will occur on this field due to its poor condition and a negligence suit will be filed. It’s simply inevitable.”

Taylor said the district had “…reached out to our architect to ask if there was a way for us to consider, or for the board to be able to consider expediting Underhill, but there’s a finite amount of time for that work to be done because of fall sports and also summer prep,” Taylor said, adding that “we think that the timeline is just too tight with the approvals that will be needed.” 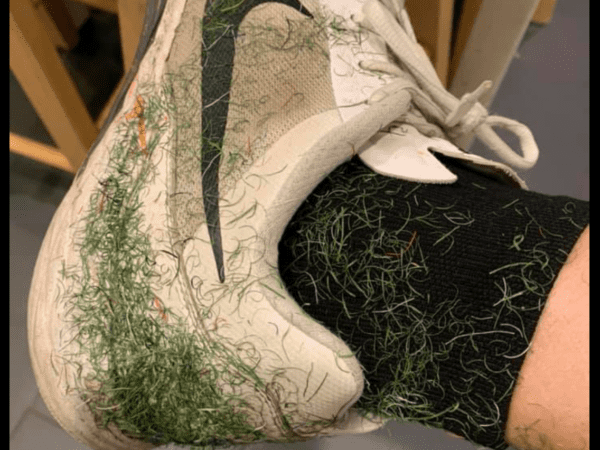 Turf fibers can be seen on a shoe in a courtesy photo provided by the MAPSO Recreational Fields Taskforce.

Approved in June 2019 as part of the nearly $160 million Long-Range Facilities Plan (LRFP) to address infrastructure needs and add classrooms in all seven elementary schools, the projects included $1.2 million to replace the existing artificial turf at Underhill Field and $2.1 million to add new artificial turf and install lighting at Columbia High School’s Ritzer Field. The turf issue was approved unanimously after a flood of public remarks in support — and significant opposition that cited related environmental and health issues.

Minerly also noted that the South Orange-Maplewood School District’s administration “has had real and significant PR challenges over the past 12 months related to the reopening of schools,” adding that completion of the turf project would give the Board of Education “a quick win with an incredibly vocal and sizable group of district parents.”

“If nothing else, this pandemic has shined a light on just how important it is to have a safe space to play outside,” Minerly wrote in a prepared statement later shared with the Village Green. “If you walked out on Underhill on any day you would see no less than 75-100 kids carving out space for activities. This access has provided a glimmer of hope and happiness to these kids in a year where little else has been available.”