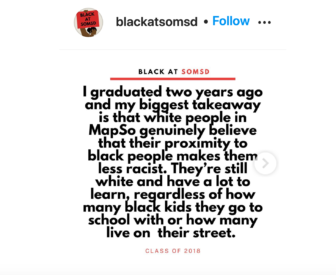 In recent weeks, an anonymous Instagram account — @blackatsomsd — has been created with the goal of giving current students and alumni of the South Orange/Maplewood school district an avenue to share experiences growing up Black in SOMA.

Using a google form instead of direct messaging to preserve anonymity, @blackatsomsd has accumulated over 2,000 followers since its first post on June 19. The page describes itself as being a “safe space” and acknowledges the “bravery” it takes for people to come forward with their stories. Posts range in topics including accounts of reported micro-aggressions by peers and faculty, the racial achievement gap, and criticisms from staff members.

The first story, shared on June 22, traced a student’s experience from Kindergarten. The writer notes, “When I was in Kindergarten at Clinton School, my teacher who had been in the system for a very long time would label me a problem child. Every day, she’d call my mother, send me to the nurse because she didn’t want to deal with me, and suggested holding me back.”

As of July 1, more than 60+ stories had been shared on the page, with the number increasing daily. 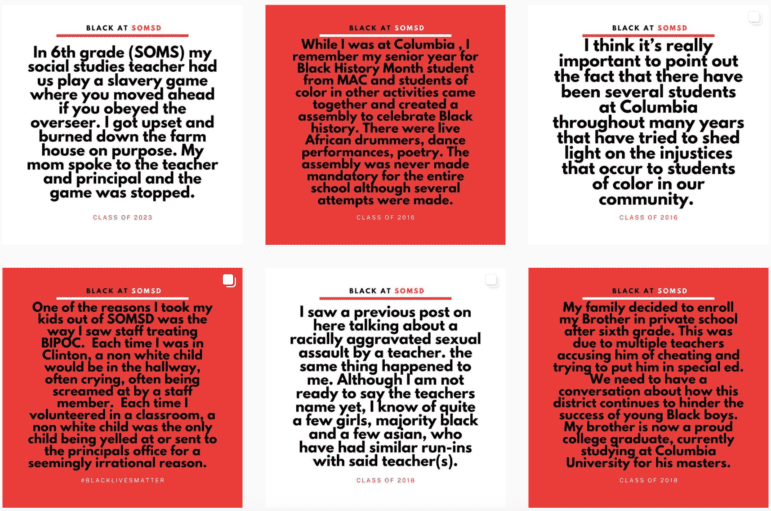 A sample of six posts on the Instagram page @blackatsomsd

Tamia Haynie, a third-year student at Morgan State University (a historically Black college) and alumni of Columbia High School, said she found out about @blackatsomsd after the page followed her on Instagram. Haynie said that as a Black woman, a safe space is important to her and other Black women for them to feel safe and comfortable. She notes that @blackatsomsd has “executed this [safe space] effectively” and that the page served to validate issues Black students report they are experiencing within the school system.

The page follows 19 accounts of a similar nature on Instagram, including @blackatwestorange, @blackatlivingston, and @blackatmhs—all pages used to share Black experiences at their respective institutions. These platforms have all been created in light of the social movements sparked by the death of George Floyd on May 25th, 2020. The Intagram page @blackatsomsd was created shortly after a series of protests that occurred in the South Orange/Maplewood community, which has concurrently kindled a conversation about race in the towns’ own backyard.

“None of the stories on the page have surprised me,” Haynie says, “I have always been aware of the discrimination and micro-aggressions that young Black people in this town have experienced within the school system and that we have personally experienced first-hand throughout our education.”

As reported by Village Green, efforts in the community to eliminate systemic racism in local public schools has been a topic of discussion amongst student leaders and the South Orange/Maplewood Board of Education. With the overwhelming attention surrounding @blackatsomsd and similar discussions, it would be hard to ignore.

Haynie says that the page reveals the enormity of the issues within our town, and is more widespread than many would like to admit. “I hope that other people realize that the issues are systemic and need to be openly addressed and reformed to provide the inclusive learning experience that SOMSD prides itself on.”

Raina Hackett has been a resident of Maplewood, New Jersey since her birth in 2000. She graduated from Columbia High School in 2018 and currently attends The George Washington University in Washington, DC.