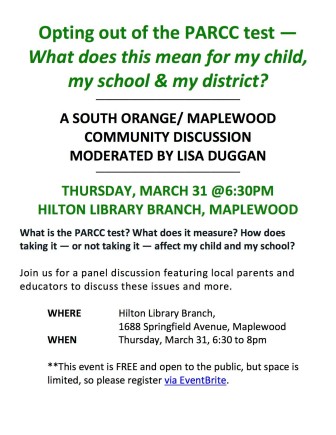 A panel discussion with and by local parents at 6:30 p.m. on March 31 at the Hilton Branch of the Maplewood Library will discuss the implications of opting out of the upcoming PARCC exam.

“Opting Out of the PARCC Test” will be moderated by South Orange parent and resident Lisa Duggan and will feature:

Officials of the South Orange-Maplewood School District have stated that the PARCC exam will start the week of April 4 in the district this year. The test schedule, which will encompass one week of participation per student this year instead of two, will vary by school building. The South Orange-Maplewood School District is not a participant in the March 31 “Opting Out of the PARCC Test” event.

Duggan said that the impetus for the panel discussion grew out of a conversation between her and Aryee-Price. Aryee-Price called Duggan “to ask if I was interested in learning more about PARCC and the refuse movement. I said Yes!”

Aryee-Price, a native of South Orange & Maplewood, now teaches in Hackensack. Panelist Lauren Freedman is a Maplewood parent who “has been investigating PARCC on her own,” said Duggan, and Julie Borst is an organizer with saveourschoolsnj.org, an advocacy group that was active in PARCC opt-out protests last year.

Duggan is the mother of a 7th grader at South Orange Middle School and former publisher of The MotherHood Magazine.

“My hope is to talk about what the PARCC test is and does, who created it/manages it, what it is supposed to measure and what is actually can measure, and the value of if (or lack of value) for our kids, schools and district,” said Duggan. Duggan said she has not yet decided whether or not to opt out her child.

“We need more info,” said Duggan. “You can’t refuse (nor should you) something you first don’t understand.”

SOMSD Superintendent of School Dr. John Ramos has stated via letter that “families who wish to be exempted [from PARCC] are asked to submit a letter to their principals. Principals, in turn, confirm receipt and honor the request.”

Ramos also said that “although families certainly have every right to opt out, we are obligated to encourage participation.”

District Chief Information Officer Paul Roth has stated that participation in PARCC or other large-scale testing is important to measure the effectiveness of the curriculum and student progress as well as target resources and measure the achievement gap. A large percentage of opt-outs at the high school level last year made the results non-representative of those grades, said Roth.

“Opting Out of the PARCC Test,” Hilton Library Branch, 1688 Springfield Avenue, Maplewood, Thursday, March 31, 6:30 to 8pm. This event is FREE and open to the public, but space is limited; register via EventBrite at https://www.eventbrite.com/e/the-parcc-and-your-rights-as-parents-a-south-orange-maplewood-community-discussion-tickets-23738554656