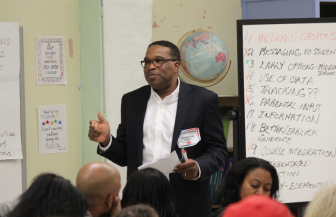 Walter Fields moderates the Access & Equity session at the Education Summit on Nov. 10, 2015.

While the South Orange Maplewood Black Parents Workshop, an advocacy group, has strong praise for the school district’s passage of a new Academic Placement policy that directs Superintendent Dr. John Ramos to develop placement regulations and realign the K-12 curriculum, the group has put the administration on notice that it will closely monitor the policy’s implementation — and will consider legal action if the district does not move to abolish all academic levels.

Calling the revised Academic Placement policy (see full policy here) the board passed Monday “historic and significant,” Black Parents Workshop’s Walter Fields commended the district for “taking this courageous but overdue step.” The district has said it is one tool toward implementation of the Access & Equity policy adopted earlier this fall, which provides students with open access and choice in all classes.

Fields said in a press release the BPW was “particularly pleased” by the Academic Placement policy’s six month timetable, as well as a commitment to have enrollment in advanced courses proportionately reflect the demographic profile of each school.

See the BPW’s press release attached here as a PDF.

However, Fields told The Village Green his organization, which worked with the US Dept. of Education’s Office of Civil Rights (OCR) on its complaint against the district’s disciplinary policies, will “seek federal and state judicial relief if leveling is maintained…upon the curriculum restructuring.”

“We believe levels are maintained in violation of the civil rights of African-American students and [the state] Constitution,” said Fields, and BPW will provide “nationally recognized scholars” to serve as expert witnesses, as well as current and former district students who will attest to the “discriminatory nature” of leveling.

“We will continue to work with the district to achieve equity but will not hesitate seeking legal recourse,” said Fields.

In a letter to the Board of Education in November regarding the policy in its first iteration, before it was revised, Fields wrote, “The district would lead the public to believe that access and equity are one [and] the same [but they] are not…choice alone is insufficient to address the systemic discrimination evident in the [district]. Without a wholesale reform of the system, choice is “just another layer of deception used to avoid responsibility for the patterns of discrimination…”

It is the responsibility of the Board of Education, and not African-American parents, to fix the school district, said Fields.

Regarding the group’s position on Advanced Placement (AP) courses, Fields said while such courses are not required by state law or necessary for high school graduation, if provided, they must be open to all students.

The policy passed Monday did not directly address deleveling, other than to state that the “creation or elimination of any academic or enrichment programs in which students are placed…shall require Board approval and shall include a plan for measuring the success of the changes proposed.”

See the BPW’s November letter attached here as a PDF.

Asked to respond to Fields’ comments, district spokeswoman Suzanne Turner said the newly-passed policy will involve a great deal of work, done in collaboration with the community, to craft the specifics of how the process will work. The district will keep the community informed as it develops the regulations and curricular alignment.

As for levels, “Dr. Ramos has stated that the district currently plans to maintain levels,” said Turner. However, per the policy, “if the district were to decide to make a systemic change such as eliminating levels, this would need to go through the established procedures for approval by the Board including being discussed first with the relevant Board of Education committees, then at full Board meetings with ample opportunity for public comment.”

Black Parents Workshop has also said it will be issuing the district an “Equity Report Card” at the end of each academic year.