From the Victoria Carter Group 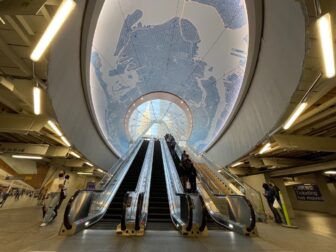 The third-largest provider of bus, rail, and light rail transit in the country, NJ TRANSIT provides 270 million transit rides every year, and its services—and delays—are a hot button topic for NJ commuters. Luckily for New Jersey residents, the construction phase of the Gateway Program has cleared final approvals, and the initiative includes both new construction and current transit tunnel repair. After its completion, there will be four operating rail tracks from Newark, NJ, to New York Pennsylvania Station.

The Gateway Program will be responsible for improving, reinforcing, and maintaining an essential part of the Northeast Corridor (NEC). One of two rail tubes in the North River Tunnel, damaged during Hurricane Sandy, will also be repaired as part of the program, as will the Portal Bridge. In addition, the Gateway Program Development Corporation (GDC) will oversee the addition of two additional rail tubes into New York Penn Station, thereby increasing capacity along the busy 10-mile section of the NEC from Newark, New Jersey, into New York City (NYC). Not only will this infrastructure program positively impact New Jersey commuters, there may be broader economic impacts as well.

In October 2021, President Biden and Governor Murphy broke ground on the new Portal North Bridge, part of the Gateway Program. The existing bridge is 110 years old and infamous for causing bottleneck traffic. “It will be higher over the water,” said President Biden, “so it won’t need to open and close, and allow us to increase speed, safety, efficiency, and capacity. It’s going to make life a lot better for New Jersey’s commuters.”

Earlier in October, Governor Murphy and the board of NJ TRANSIT announced the $1.56 billion funding for the rebuilding of the Portal North Bridge. This investment is the largest construction grant in NJ TRANSIT’s history. The new Portal North Bridge is a significant initial step in the Gateway Program. It will rise 50 feet over the Hackensack River, allowing marine traffic to pass underneath without disrupting rail traffic, which should help decrease gridlock. Construction is estimated to take five and a half years.

2.  The Gateway Program Increases Access to the Manhattan Job Market

One of the most important aspects of the Gateway Program is the potential economic benefits for both commuters as well as the general public. By some estimates, 400,000 New Jerseyans commute into New York City on any given weekday. So, it is essential that these workers have reliable access to their jobs. Efficient Trans-Hudson commuting is critical and gives New Jersey commuters access to the New York City job market. In addition, the growth and vitality of the City are dependent on access to a variety of specialty, highly-skilled workers from the Tri-State area.

Among the other key components laid out in the Gateway Program is the Hudson Tunnel Project. This project proposes to construct a new passage underneath the Hudson River while also preserving the existing North River Tunnel. It will maintain the current functionality of Amtrak’s NEC service and NJ TRANSIT’s rail service going from New Jersey to NY Penn Station.

The new passage beneath the Hudson has the added benefit of helping to prevent an increase in traffic congestion should there be a closing of one of the North River tunnels. By some estimates, closing one tube could decrease train capacity by as much as 75%. The consequences would force commuters onto already jammed bridges and highways.

4. The Finished Gateway Program May Increase Some NJ Home Values

The Gateway Program is set to make travel from northern New Jersey into New York City more reliable and convenient. One interesting fact—approximately 40% of all New Jersey homes are within two miles of a train station. As evidenced after the construction of the Midtown Direct train line, convenient rail access to New York City often gives neighboring home values a boost.

A New York Times article looked at the impact of a third rail tunnel into Manhattan in 2010. Reportedly, NJ homes within 2 miles of a train station with service into Manhattan could see a $19,000 boost in value. Homes within half a mile of a train station could see values rise $29,000. The cumulative increase in property values for New Jersey real estate could be as much as $18 billion.

A larger footprint and updated facilities for Penn Station would improve the commuting experience for New Jersey residents that work in the City. The expansion is in addition to the recently completed Moynihan Train Hall, which doubled the concourse space of NY Penn Station.

Without a doubt, one of the most important reasons families choose to live in northern New Jersey is commuting access to New York City. With significant capacity improvements on the way, it can only be good news for New Jersey real estate and the many communities serving as commuter havens along the Midtown Direct train line. If you are considering a move to northern New Jersey or would like to learn more, I would love to assist you. Contact Victoria Carter at (973) 220-3050 or email victoria@victoriacarter.com.