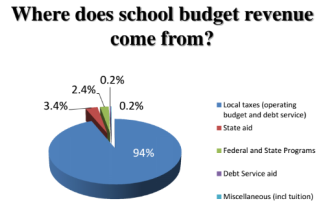 For the 2015/16 school year, the State of New Jersey provided less than 3.5% of the funding for the South Orange-Maplewood School District budget, leaving local taxpayers to pick up the bulk of the funding.

In fact, despite enrollment increases and other stresses on district finances, the South Orange-Maplewood School District received the same amount of aid from the State of New Jersey for the 2015/16 school year as it did for the 2014/15 school year. (State aid for 2016-17 increased by $91,349 over 15-16 aid levels; however, it continues to represent less than 3.5% of the overall budget.)

Local leaders such as Board of Education President Elizabeth Baker, former Board of Education member Jeff Bennett, South Orange Village President Sheena Collum and Maplewood Committeeman Greg Lembrich have been vocally advocating for school funding reform on the state level. The Board of Education’s policy committee has been lobbying in Trenton on the issue, Bennett has been maintaining a blog about school funding reform, and Lembrich introduced a resolution supporting such reform which the Maplewood Township Committee passed earlier this year.

Currently, there are several bills in the New Jersey legislature on the topic, including one sponsored by Senate President Steve Sweeney and another sponsored by Assemblywoman Mila Jasey and Assemblyman John McKeon, both of whom represent South Orange and Maplewood.

The Jasey/McKeon bill would provide the South Orange-Maplewood School District with an additional $2,179,393 in state aid for the 2016-17 fiscal year. According to the Jasey and McKeon, the amount represents revenue to which the district is entitled but is not receiving “through the state’s underfunded School Funding Reform Act formula.”

However, according to Bennett, the Sweeney bill has the greatest chance of passage (Sweeney is the Senate President and a potential gubernatorial candidate): “Sweeney has multiple cosponsors, one of whom is Teresa Ruiz, the author of NJ’s tenure reform.  Sweeney’s bill has also gotten bipartisan praise, including from Jon Bramnick, the Republican assembly leader.”

In Bennett’s analysis Sweeney’s bill “provides money through redistribution and new revenue to under-aided districts…. It has the least convoluted process for identifying districts to get money and pays for itself in part by taking money from the over-aided. It also addresses the tax cap and how PILOTing distorts state aid.” In April, South Orange Village President Sheena Collum expressed support for the Jasey/McKeon bill, writing, “South Orange is eager to support the efforts of Assemblyman McKeon and Assemblywoman Jasey. If there’s any issue that brings our municipal governments, school board, state representatives and community together, it is the distribution of state aid to our school district. Moving forward, I encourage our residents to get involved with what will require an incredible lobbying effort not just to move this bill forward but to raise awareness throughout the state.”

All this and more will be discussed at a State Aid Workshop sponsored by the South Orange-Maplewood School District on Thursday, June 16, 2016, 7:30 pm. to 9:00 p.m. at the Columbia High School Library, 17 Parker Avenue, Maplewood.

Learn about State Aid for our schools and how the get involved with advocacy for our district. Whether you have children enrolled in SOMSD schools or not, the school budget affects every resident of South Orange and Maplewood. Our schools are funded through a combination of local property taxes and state aid. Yet, year after year, we do not receive our full amount of funding from the state.

Join Board of Education members and Lindy Wilson from the office of Assemblywoman Mila Jasey for an overview of State aid funding history, pending legislation and the impact on our school and towns.