On December 7, the Maplewood Township Committee officially approved the promotion of Joseph Alvarez to Fire Chief during an official meeting on Zoom.

The township had conducted a ceremonially in-person swearing in the night before at town hall, allowing Alvarez to enjoy the moment with friends and family. Alvarez’s sons Joey, a police officer, and Patrick, a firefighter, held the Bible as he took the oath. His wife Erica and daughter Paige were also with him.

Alvarez takes on leadership of the department just as Maplewood and South Orange near the final stages of creating the joint South Mountain Fire Department. 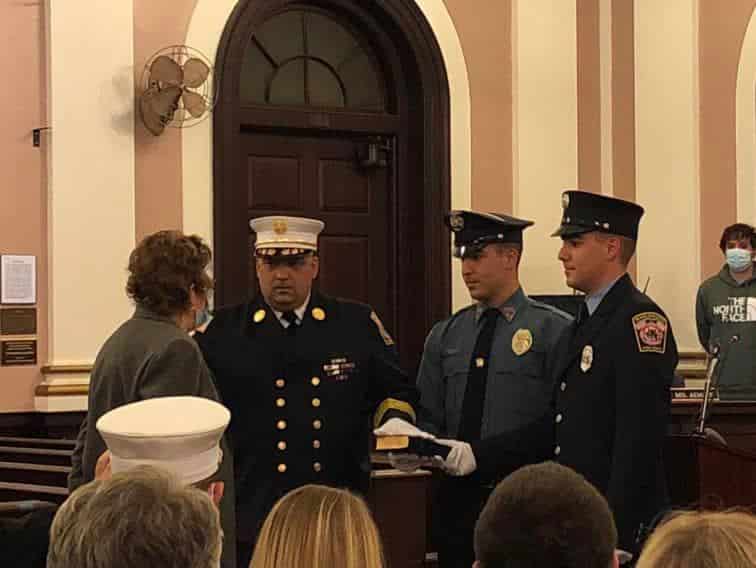 “I’d first like to thank my family for their constant support,” said Alvarez after the official swearing-in via Zoom on December 7. “They’re very strong. My daughter, my sons, my wife… I’d also like to thank the Township Committee for giving me this opportunity and putting your trust in me to protect the residents of Maplewood. I’d also like to thank [Townwhip Committee member and Public Safety Committee Chair] Greg Lembrich … you’ve done a great job. The members of the Maplewood Fire Department … you’re family, you’re second to none.”

Alvarez also thanked mutual aid towns including West Orange, Irvington, Newark, Union and South Orange.  “I look forward to working with them as the new Fire Chief. And I’d also like to thank Captain [Steven] Casiello on his promotion.”

“I promise I won’t let you down,” Alvarez said.

Alvarez has a statewide profile as a member of an elite New Jersey search and rescue team.

This summer, Alvarez traveled to Florida to assist in the Champlain Towers South condominium collapse which occurred in the early morning hours of June 24. Nearly 100 souls were lost in the disaster; every missing person’s body was recovered.