The results of the Maplewood Local Health Assessment, conducted during July and August, were presented by Health Officer Candice Davenport during the Board of Health meeting at Monday night’s Maplewood Township Committee meeting.

One hundred and ninety residents took the assessment, and were from various parts of the township.

The assessment was conducted as part of Maplewood’s pursuit of Sustainable Jersey’s Gold Star Standard in Health. According to the Sustainable Jersey website, certification is free, voluntary, and “provides a roadmap for actions that improve communities.”

The Gold Star in Health, according to the website, is awarded to towns that demonstrate “how they have effectively incorporated health in municipal decision-making and addressed certain social and environmental conditions impacting the health of their communities.” Maplewood would be the first municipality in the state to be awarded the Gold Star in Health, said Davenport.

As the first step in a four-step process toward the Gold Star in Health, the assessment gathered community input on six topics: Transportation, food, housing, wellness and recreation, safety and community, and public engagement and communication.

You can watch the presentation here, beginning at the 13:30 mark and ending at the 47:38 mark.

While 15% of respondents praised the township’s sense of community and its diversity, safety — including pedestrian and cyclist safety — and the upkeep of the town’s roads, sidewalks, and recreational facilities registered as top concerns of Maplewoodians.

In the meeting’s public speaks section, Maplewood residents discussed broken sidewalks in town as a particular hazard to pedestrians in response to the assessment’s findings.

“It’s distressing at times to see the state of the sidewalks in Maplewood,” said Stephanie O’Connor. She said that she and her husband had undertaken sidewalk repairs themselves and that she had sued the township several years after a fall on a local sidewalk.

Caroline Burke said that she, too, had fallen on a Maplewood sidewalk during a run. She wondered whether the expense of repairs was daunting to local homeowners, and, “If that is the case, how we can work as a community to make fixing the sidewalks more accessible to people.”

TC member Frank McGehee confirmed that it is the responsibility of homeowners to repair sidewalks. “It’s a significant, four-to-five figure expense,” he said. Calling it a “delicate balance,” he promised to explore the issue further at next week’s code meeting.

“Not many homeowners can afford” to fix their sidewalks, said Maplewood Mayor Dean Dafis after the presentation. “It creates an equity issue.” He said he would explore a solution that would not penalize homeowners who could not afford repairs.

TC member Nancy Adams said after the presentation that she hoped residents who wanted sidewalks and streets repaired would submit those issues through the township’s website.

The assessment also indicated that the community desires more of a police presence and is concerned about rising crime.

Katrina Campbell, who was voted onto the Community Board on Police by the TC at the outset of the meeting, said,”As a resident of Hilton [neighborhood], we probably do have some mixed feelings on the presence of police. At times we need more, and at times, we’re like, why are we always hearing the police?”

McGehee said that the Community Board on Police, on which he sits as the TC liaison, had recently discussed the issue of police presence — particularly in relation to police in community schools — and said he looked forward to working with Campbell.

Campbell thanked the township and praised the report, saying “I am looking forward to hearing [about] that as I learn more about the service that I am about to embark on.” 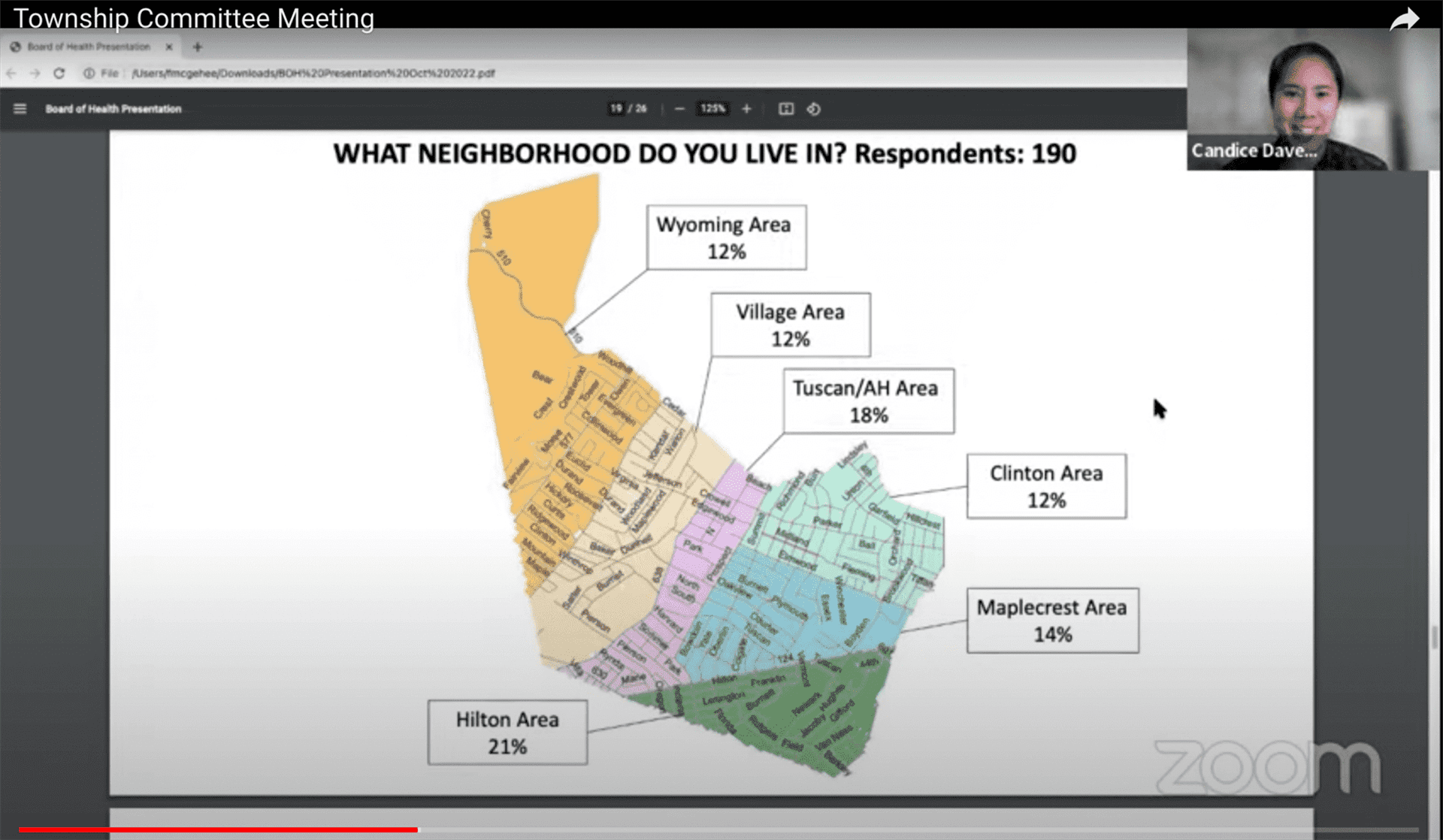 More than half the community, the assessment found, was unaware of the town’s programming and community resources, indicating a need for improved communication. “We do so much and we work so hard, so I just wanted to bring that to your attention,” Davenport said.

Deputy Mayor Vic De Luca questioned the framing of the assessment question about the town’s services, which he noted included things like recycling, plowing snow, and leaf collection. “My guess is everyone knows about recycling,” he said. “It’s a little misleading.”

“Still, we can improve the communications that we send out,” Dafis said following the BOH presentation. Dafis noted that that the township heavily promotes cultural events like Maplewoodstock,  but has work to do where things like senior programming are concerned, which Davenport had singled out as a particular gap in knowledge.