Update: the township released several documents Wednesday regarding the asbestos removal; they can be found here and on the township website.

The removal of asbestos-containing caulking from windows at the former Maplewood Post Office was handled property, say Maplewood officials. 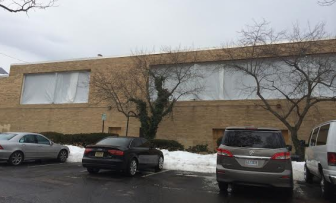 Committeeman Greg Lembrich brought up the issue at Monday night’s Township Committee meeting, saying there had been public concern about the asbestos removal following activity at the site this past weekend.

“Can we get an update to share with the public to allay concerns?” asked Lembrich.

As noted on the Village Green Facebook group this weekend, workers were seen dropping glass from the windows onto tarps on the path below on Saturday, Jan. 30. When contacted, developer Joe Forgione told Village Green that the contractor was following protocols. He noted that there was no asbestos in the glass: “The asbestos is in the caulking that holds the glass in place, not the glass itself.” A worker on site said that the asbestos content of the caulking was 2%; Forgione said the worker was correct. 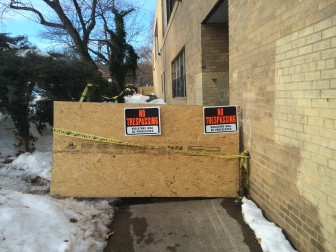 On Monday night, Township Administrator Joseph Manning said that the asbestos was being removed according to protocols and that Township Building Official Robert Mittermaier was monitoring the removal. Said Manning, “I spoke with him today and he has no problem with how they are doing it.”

On Thursday, Feb. 4, Village Green spoke with Mittermaier who said that the manner in which the contractor was handling the asbestos removal was acceptable.

The State of New Jersey provides the standards for overseeing asbestos removal. In the case of this property, Mittermaier said that all appeared to be in keeping with those standards for which the owner had applied to and received approval to remove the asbestos: the work progressed appropriately for a vacant unoccupied structure being readied for demolition. In addition, Mittermaier had asked the developer to seal the building not because of concerns related to the asbestos, but due to security concerns that someone might try to enter the building.

On Wednesday, Feb. 3, the Township posted documents on its website including a letter in which the developer requested a waiver of the ten-day asbestos removal notification requirement to the State of New Jersey due to the fact that the development experienced a “leak which got the asbestos wet” and was under time constraints; the asbestos contractor’s license; and a letter from the contractor stating the removal had been completed and filings had been made with the state. (See the documents here.)

Back at the Monday night Township Committee meeting, Deputy Mayor Nancy Adams noted that Maplewood police and others “had problems” with the contractor shutting down the sidewalk between the building and the parking lot “without permission to do so.” Manning noted that the developer had been informed of the need to contact either the police or Mittermaier for permission before any sidewalk closures. Manning said that the police would then use Nixle and email to notify the public.

Note: Village Green has a query in to Bob Mittermaier requesting further details and will update this story when the construction official replies.