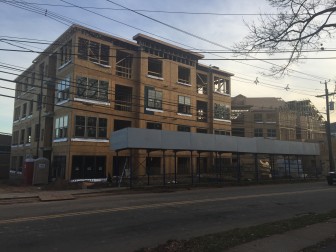 Avalon Bay Maplewood, the 235-unit housing development at Springfield Avenue and Boyden Avenue, is nearing completion. “Tentative plans are to have its on-site rental office open by mid-February and [the] first tenants in apartments in late March/early April,” said Mayor Vic DeLuca recently.

Read about Maplewood Planning Board approval for the site plan here; read about the Township Committee’s approval of the redevelopment and financial agreements for the project here. Read about Avalon Bay’s assurance of fire safety precautions for the new building here.