STUDIO B Hosts Story Slam on April 1 — No Kidding 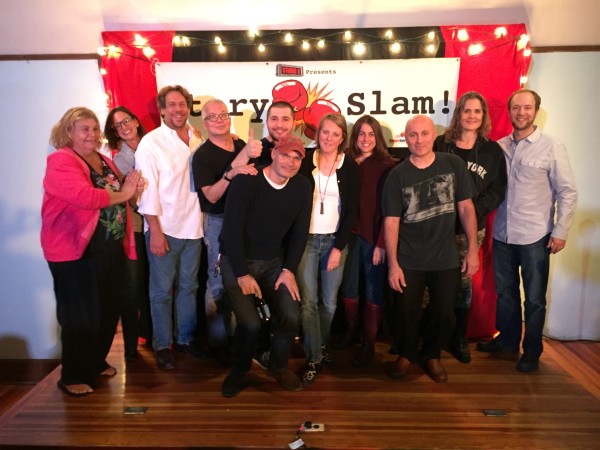 Past Studio B Story Slam winners

There’s no denying it. In Maplewood and South Orange, writers are everywhere.

Sprawled out on tables at local bakeries, huddled over laptops on NJ transit, or hidden away in attic offices, this place is silly with writers. Close your eyes and listen hard … you can hear the sound of keyboards clicking.

But, what – pray tell – are they writing? The next great American novel? An Oscar-winning script? Grocery lists?

It’s time to come clean, writers out there. Studio B is throwing a STORY SLAM on April 1 (it’s no joke!). You’ve got five glorious minutes to share that work with the best audiences anywhere.

“This is a great opportunity to share work with an incredibly welcoming – and extremely discerning – crowd,” says Jenny Turner Hall, Studio B Honcho. “The Story Slam is a level playing field for all-comers: newbies and pros alike. All writers are equal in the eyes of our audience.”

Marcy Thompson, Co-Honcho, adds, “In fact, this event is as much for writers as it is for the listeners. Story Slams are pure, unfiltered entertainment – a chance to hear a range of amazing stories, and root for your friends and neighbors.”

Here’s how the evening works: writers put their names into a hat, and over the course of the evening, 10-12 names will be called. At the end of the competition, three local literati will decide on a winner (who will receive a voucher for two tickets to the show of their choice at SOPAC). On April 1, Robert Shaffron (last Slam winner), will return for a victory lap reading of a new story.

Don’t expect a snoozy literary reading. A Studio B Story Slam is a raucous event, complete with musical entertainment and nimble hosting by the Studio B honchos. “We’ve been doing Story Slams now for almost six years, and we’ve sold out every show. We must be doing something right,” says Hall.

“Our job is simple: we bring together the writers and audiences of this community. The stories are the stars of this show,” adds Thompson.

Hear that, writers? Time to come out of hiding and put your work front and center.