‘You Are Seen…You Are Welcome’: Maplewood Proclaims June as Pride Month; Kicks off Month of Activities

“June is Pride Month,” Dafis said, “and it is an especially welcome Pride Month this June after 15 months of being in isolation, and being disconnected from one another.” 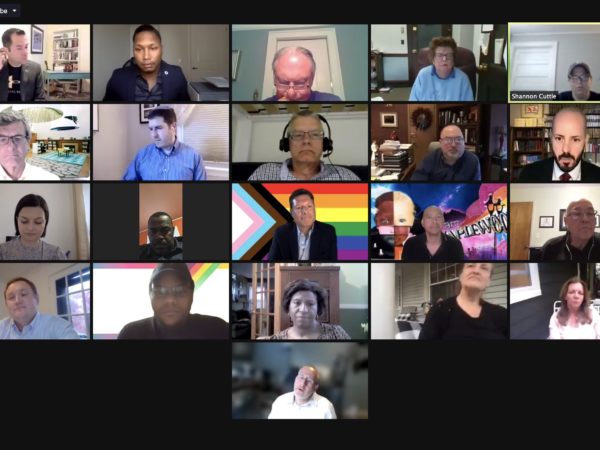 “So, we’re going to have fulsome opportunity all month long to celebrate each other, to celebrate the great diversity of our community, and all of our intersectionality to see each other and truly affirm one another, to lift our voices,” Dafis said. “The equality struggle remains, there are issues unresolved.”

Before reading the proclamation, Dafis spoke about the importance of visibility and representation.

“You know I really take this duty very seriously because visibility matters, representation matters,” Dafis said. “There are young ones out there watching us. They want to see leaders, hopefully, we will inspire some to walk in our shoes, open the door for new elected [officials] and other leaders and hopefully, we will help some of those out there who are not sure, who are experiencing doubt and possibly depression and worse. You are seen, you are loved, you are welcome in Maplewood and in South Orange.”

LGBTQ advocates from across the state were in attendance and took turns reading the proclamation along with Dafis and Mayor Frank McGhee.

Manuel expressed why Pride Month matters to the LGBTQ community.

“In many ways, Pride [Month] is about being visible, being seen and letting others know to see them. It’s nice to be seen and it’s nice to be heard,” Manuel said.

Cuttle added the importance of allies standing in solidarity with the LGBTQ community.

“At this critical time, we know that there’s been more than 80 anti-LGBT pieces of legislation across the country,” Cuttle said. “And this Pride month, it is so much more impactful that our allies not just stand with us to support us during Pride month but throughout the year and speak up against these attacks and anti-LGBT legislation that are particularly targeting our trans youth across the country.”

Bledsoe said how honored he was to be in attendance.

“As Dean so eloquently mentioned this evening, this work is not easy. It’s hard, it’s difficult,” Bledsoe said. “ We live this every single day 365 days a year, not only through the month of June, but every day when we experience discrimination in housing and employment, and to know that there are states across this country who continue to roll back so much progress that we’ve made thus far, it’s just an honor to be here and amongst all of you all’s presence.”