The Village Green May 2, 2015
0 FacebookTwitterPinterestEmail

The following press release is from Seton Hall University.

Ambassador Rice described how the U.S. is responding to global crises in several regions, particularly in Africa, where Congressman Payne played a key role in advancing effective U.S. engagement. Rice explained that the U.S. is working to prevent atrocities and strengthening accountability when they do occur. She referred to recent legislation, signed by President Obama,  that will “expand the State Department’s authority to offer cash rewards for information leading to the arrest or conviction of individuals accused of atrocities by any international tribunal. We are committed to working with our partners to bring to justice those who are responsible for such unconscionable crimes.” 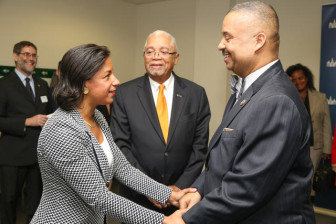 Payne, Sr., a 1957 graduate, was also remembered by his brother William D. Payne, chairman of the board of the Donald M. Payne, Sr. Global Foundation. “It was on the campus of this venerable institution of learning that my brother, Donald Milford Payne, a scholarship student, began to formulate his philosophy of life that would guide him toward initiatives to uplift the disadvantaged youth of his community and beyond.”

“We are thrilled to have had the opportunity through the Payne Foundation to honor the memory of distinguished Seton Hall alumnus, the late Congressman Payne, by hosting such an influential guest on campus,” said Andrea Bartoli, dean of the School of Diplomacy and International Relations. “I could not think of a more perfect addition to join the ranks of impressive World Leaders to come to Seton Hall than our National Security Advisor, Ambassador Rice.”

Congressman Payne served as a friend and mentor to Ambassador Rice. She recalled his warmth and quiet humility that drew people in. “To Congressman Payne the only important thing was standing up for what’s right, even if you’re the only one standing. He took that enduring motto of his alma mater to heart—Hazard Zet Forward—even when, on occasion, the hazard was militants in Somalia firing at his plane. He never shied away from taking a bold or controversial position, if he was following his own moral compass.”

The event marked the inauguration of the Donald M. Payne, Sr. Lecture Series as part of an ongoing relationship with Seton Hall University. “From the seed of the lecture series idea, all Seton Hall staff worked with us to water it, make it grow and blossom into a plant of which we can all be proud,” shared Gayle Thigpen-Allen, Allen and Partners Inc., Payne Foundation consultant. “The Foundation really appreciates this partnership in that it helps confirm that Congressman Payne’s alma mater also desires to preserve and advise the world of his great works and the need to continue his diplomatic ways in global interaction.”

Ambassador Rice concluded her remarks to a standing ovation. “We need more people who look at the world and see, not the enormity of the challenges ahead, but the possibility for a better world that lies beyond them,” she said. “When it comes right down to it, we need more leaders like Donald Payne.”

One of the country’s leading Catholic universities, Seton Hall University has been developing students in mind, heart and spirit since 1856.  Home to nearly 10,000 undergraduate and graduate students and offering more than 90 rigorous majors, Seton Hall’s academic excellence has been singled out for distinction by The Princeton Review, US News & World Reportand Bloomberg Businessweek.   Seton Hall, which embraces students of all religions, prepares its graduates to be exemplary servant leaders and global citizens. A founding member of the new Big East Conference, the Seton Hall Pirates field 14 NCAA Division I varsity sports teams.  The university’s beautiful main campus is located in suburban South Orange, New Jersey, and is only 14 miles from New York City – offering its students a wealth of employment, internship, cultural and entertainment opportunities. The university’s nationally recognized School of Law is prominently located in downtown Newark.  For more information, visit www.shu.edu.

The mission of the Donald M. Payne, Sr. Global Foundation is to continue the work of New Jersey’s first African American U.S. congressman, who used his global influence to work toward eradicating health and education disparities, promoting peace and youth development and uplifting the human condition worldwide. For more information, visit:www.paynelegacy.com.