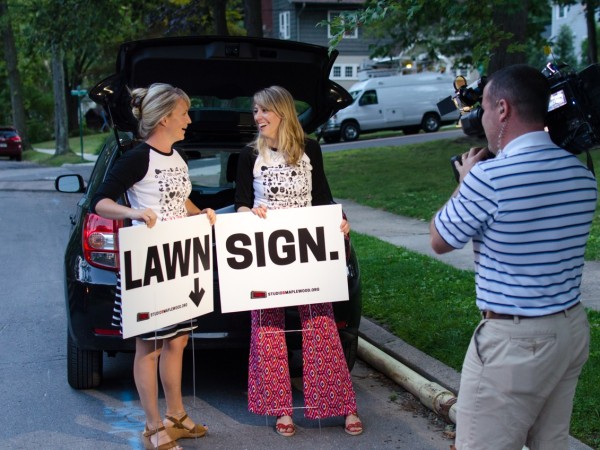 Marcy Thompson and Jenn Turner Hall of Studio B are interviewed by Dave Carlin of CBS 2.

Are lawn signs really “pitting neighbor vs. neighbor” in Maplewood?

CBS 2’s Dave Carlin would have you believe so. Calling it a “battle”, Carlin filed a report showing various signs including the ubiquitous CHS grad signs and the now proliferating “Drive Like Your Kids Live Here” signs. Carlin reported that the signs were “popping up like weeds” and interviewed a local saying that there were too many signs.

The highlight of the piece was Carlin’s interview with Marcy Thompson and Jenny Turner Hall of Studio B. The Studio B “honchos” have created a lawn sign satirizing, what else, the lawn sign and are using it to raise money for Studio B (read about the campaign/fundraiser here).

Overall, the report seemed to lack the playful spirit of Thompson and Turner Hall’s efforts.

“All that means is more signs and more controversy coming to a town where people like to have their opinions out in the open,” said Carlin.