The following preview was written by Audrey Noguera and was first published in The Columbian, Columbia High School’s award-winning student newspaper.

When Mom is in the hospital and Dad says it is because she has done “something stupid,” there’s not much that a confused seven-year-old kid can do but start making a list.

Therein lies the premise of Every Brilliant Thing, this year’s offering from the Columbia High School Parnassian Society whose performances seek to raise the social consciousness of students and audiences by championing and performing works that promote tolerance and understanding in our society. This wonderful play is an important addition to the broader focus on mental health and wellness underway at CHS.

Every Brilliant Thing, written by Duncan MacMillan, was originally created as a one-person show but has been adapted by the CHS Parnassian Society to feature a cast of eight: Scott Barton, Ash Barton, Davis Favors, Hayden Groner, Sabrina Mannion, Madison McGehee, Justice Muhammad, and Teddy O’Brien.

The show presents the harsh reality of what it’s like to be a child of a depressed mother struggling with her mental health and demonstrates the lengths to which we are willing to go for those we love. It is an inspiring, life-affirming story of how to find hope by focusing on the tiniest miracles of life.

The CHS Parnassian Society, established in 1895, was originally a club focused on poetic recitation. It morphed into a drama club in the 1920s and performed in the auditorium until the Black Box theater was created in 2004. Dr. Janet Bustrin and her husband, Stephen Stubelt, who is the show’s director, have led The Parnassian Society since 2002 and keep a list of potential plays to consider year-to-year. This fall, they wanted something that would help address the ongoing youth mental health crisis.

“The sensitive treatment of this topic is really something eye-opening and that’s why we thought this play, this year, was the right choice,” said Bustrin.

In addition to the student assistance coordinators, CHS has social worker interns, the Loft, the counseling annex, and a student mental health club. Club President Fiona Donohue and vice president Sophia Varela note that good mental health is “just as important as physical health” and that speaking about it openly can “make students feel more comfortable and understand that if they are struggling they can reach out to someone for help.”

Performing in the show has certainly changed the way actor Sabrina Mannion views issues of mental health, and she hopes that it will have the same effect on the audience. Concerning mental health, she thinks, “it’s a very brilliant way that [the show] portrays it… I’d like to see more people hopefully get the same out of it that I do.”

This wonderful adaptation of Every Brilliant Thing portrays a serious topic in a way that is chillingly beautiful, keeping the audience involved and engaged. It balances education and comedy effectively, often making one smile and cry at the same time. 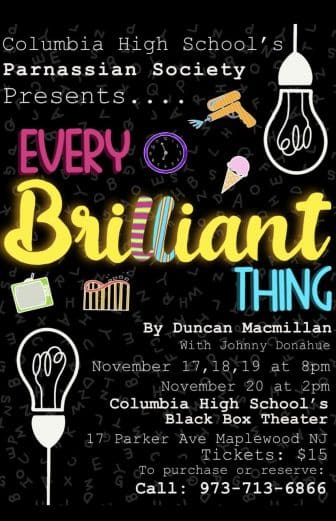