Editor’s note: This article has been updated at 1 p.m with the name of the victim, Moussa Fofana, an 18-year-old CHS student.

This article has been updated at 10:03 a.m. with more information from CHS Principal Frank Sanchez, confirmed that the victim was an 11th grader, and that another student was injured. The story was updated at 11:20 a.m. with a message from Maplewood Middle School Principal Dara Gronau.

An 11th grade student from Columbia High School was killed during a shooting incident on Sunday night at Underhill Field in Maplewood, according to authorities.  Another CHS student was injured and hospitalized.

“There is an active homicide investigation,” said Essex County Prosecutor’s Office Chief Assistant Prosecutor Thomas Fennelly on Monday morning. He confirmed there was “one male victim” but declined to give the age of the victim.  Fennelly confirmed the incident took place at Underhill Field, but that the time was unclear. He said there would be more information later Monday.

“Moussa was adored and cherished at MMS,” said Maplewood Middle School teacher Suzanne Fein. “Our community is devastated to learn of this tragic loss of a beautiful soul. Nothing pleased Moussa more than human connection. A student who never went without a thank you and a kind smile, grateful for all who engaged with him. A positive light in our world has dimmed, and our hearts are forever saddened.” 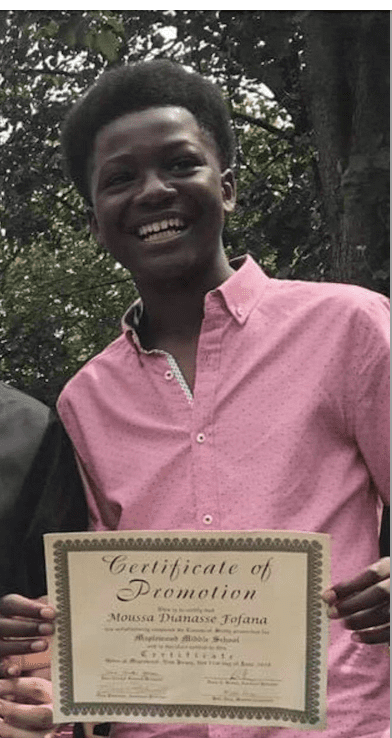 Meanwhile, Columbia High School Principal Frank Sanchez sent an email earlier Monday morning to teachers confirming that “a few of our students were in a horrible situation last night at Underhill Field” and that while authorities had not yet given specifics, “it looks like a student may have died.”

Sanchez later sent an email to CHS parents confirming that the deceased student was an 11th grader, and that another student was hospitalized. Maplewood Middle School Principal Dara Gronau also sent a letter out to the MMS community late Monday morning, confirming that both the deceased victim and the injured victim were MMS alumni and offering counseling and support to students.

“We are in close communication with the authorities. The District will provide updated information to staff and the District families as it is received. Until such time as information is received, we are making preparations for addressing the needs of our students, staff and families. I have notified our County Executive Superintendent of Schools and we are activating the County Grief Counseling Services via the Traumatic Loss Coalition, to support our students and staff..

With this devastating news, I have confirmed with our Board of Education that the retiree celebration scheduled for this evening will be canceled and postponed to a later date. Also, all activities at Underhill field are canceled while the investigation proceeds. In addition, due to the proximity of Underhill to Clinton Elementary School and the ongoing police investigation taking place, all outdoor activities at Clinton will be canceled for the day (and/or take place indoors where necessary).

At this time, out of respect for the family and due to the ongoing nature of the police investigation, we are unable to share the names of the affected students. We offer our sincere condolences to the family in their time of need. We will follow up with additional communication as we receive clearance from the local law enforcement and the family.”

According to RLS Media, residents on Burr Road heard gunfire around 10 p.m., and called police. This has not been confirmed by authorities.

As you learned in an earlier communication from Dr. Taylor, our community tragically lost a current CHS student who attended MMS for all three years of middle school.  A student who was injured also went to Maplewood Middle School.   Out of respect for the family we are not sharing the names of the students.

We are sharing this information with parents and families to give you the opportunity to discuss this terrible loss with your child in a manner that feels most comfortable for your family and your child.

If you need any suggestions on how to discuss this sad news with your child, our team of social workers and counselors at MMS have suggested the following resources.

Tomorrow, Tuesday, June 8  district and MMS Social Workers and counselors will be present at MMS all day to speak with any student or staff member in need of support.  Contact information for our counselors and social workers is listed on the second page of this document.

The Maplewood Middle School family cares deeply for one another. Our thoughts and concerns are with the families at this most difficult time.

Village Green will continue to update this story as we learn more.