Two men are running lonely races for their respective parties’ primaries for a Maplewood Township Committee seat this Tuesday, June 7. 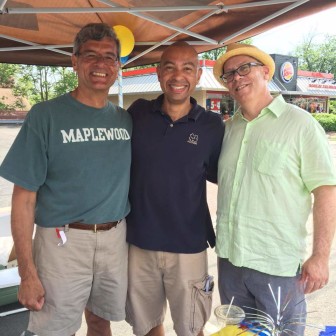 Frank McGehee is running unopposed for the Democrat slot, and Mike Summersgill is likewise the only Republican running in that primary.

McGehee is a 3-year Maplewood resident and who was nominated by the Maplewood Democratic Committee in March to run as the endorsed Democratic candidate.

Michael Summersgill is an eight-year resident of Maplewood who declared his candidacy, with the support of the Maplewood Republican Committee, in early April.

Both men are running for the seat on the Maplewood Township Committee being vacated by Marlon K. Brownlee.

There are five seats on the Township Committee. Terms are for three years. Only one seat is up for election this year. The TC members select the mayor from among their own membership every year. Mike Summersgill and his daughters at the Maplewood Memorial Day Service at Town Hall, May 29, 2016

McGehee lives with his wife and daughter in Maplewood and works in marketing. He serves on the Maplewood Memorial Library Foundation Board, the Tuscan School PTA Executive Board, and as a Trustee for South Orange Maplewood Community Coalition on Race. To find out more about McGehee’s campaign, visit the Frank McGehee for Maplewood Township Committee Facebook page.

Summersgill will have an uphill climb in his bid: the last year that a Republican served on the Maplewood Township Committee was 1994. Despite being a Republican stronghold for decades leading up to the early 1990s, the town now votes overwhelmingly Democratic — for example, Barack Obama won 83% of the Maplewood vote in the 2008 Presidential election.

Nonetheless, Summersgill is promising to run aggressively this summer and fall, and McGehee says he’s ready for the challenge. The candidates should be meeting in a series of forums in the fall.