UPDATE: SOMEA spokesperson Michelle Rhodes-Soriano said the teachers union was awaiting a response from the Board of Education as to whether it was willing to engage in mediation. Also, the BOE extended its executive session to 90 minutes from 60 minutes. The story has been updated.

No one is saying explicitly one way or the other.

All students were moved to remote learning once again beginning Tuesday, after a series of conflicting statements from the school district and the South Orange-Maplewood Education Association gave families barely more than 12 hours to adjust to the shift. Meanwhile, the school district announced Wednesday afternoon that students would revert next week to the all-virtual schedule first introduced in September.

The school district closed schools in mid-March to help stem the spread of COVID-19. The global pandemic has now killed more than 1 in 400 New Jersey residents, higher than any other state — or any country, according to data from Johns Hopkins University. That’s up from December’s one-in-500 level.

Asked via email if the school district had engaged in negotiations, SOMSD spokesperson Anide Eustache wrote on Tuesday that the Board of Education “previously negotiated with SOMEA regarding the building-related concerns they raised in their January 25 letter. The Board’s labor counsel has been in contact with SOMEA representatives regarding the current circumstances.”

Eustache added that the BOE “is hopeful that that outcome can be reached, as it is undoubtedly consistent with the community stakeholders’ interests to resume in-person instruction as soon as possible.”

SOMEA spokesperson Michelle Rhodes-Soriano said Wednesday evening that the union “is always willing to sit down with the board and district to collaborate on a safe and sustainable action plan going forward. If and when we do meet, we would need to negotiate a safe return, starting with at-risk populations.

“We are awaiting a response from the Board with regards to their willingness to mediation. Our goals are the same, and we must find common ground so that we can safely reopen the buildings.”

In a five-page letter sent to Superintendent Ronald Taylor and the Board of Education on Monday, the teachers union said all its members would teach remotely through March 15.

SOMEA also said that it had filed 15 formal grievances related to alleged violations of Section 504 of the federal Rehabilitation Act of 1973, which prohibits workplace discrimination of individuals with disabilities. Rhodes-Soriano said a total of more than 30 grievances were elevated to the next level in the adjudication process “due to a lack of or inadequate response by the district.”

The SOMEA letter claimed that the school district had violated an agreement reached earlier this month to ensure working heating-and-ventilation units in each classroom, as well as temperatures within a specific range and open windows to provide fresh air. The agreement was reached after state and local union representatives had conducted a walk-through of all the school district’s classrooms and offices at the end of January and found that 207 out of 507 rooms were “unfit,” a characterization the school district refuted. 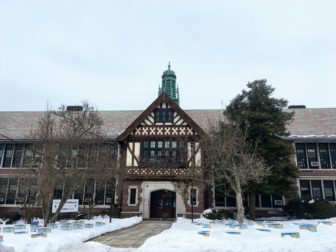 SOMEA’s letter to the BOE claimed that principals at Tuscan Elementary School, Maplewood Middle School, South Orange Middle School and Columbia High School contradicted that understanding, telling the union that any classroom with “an operating heater and working mechanical ventilation ​or​ alternative fresh air component and appropriate temperature ranges [that] can be maintained” was usable.

The union also cited guidance for reopening K-12 schools issued by the U.S. Centers for Disease Control, emphasizing the CDC’s recommendation for increased ventilation in classrooms. SOMEA claimed that building administrators “purposefully shut windows after they were opened by representatives to obtain accurate temperature readings.”

Temperature readings at the January walk-throughs ranged from 43 degrees Fahrenheit at Columbia High School to a high of 110 degrees at Marshall Elementary School.

Rhodes-Soriano urged listening to science and “not special interests.”

“There is no way we can return to a pre-pandemic normal, so we must work going forward from this point in time,” she said. “We have to create a new normal, in a time where a deadly airborne virus is in control of the return to in-person instruction. No parent, no district, no union has that authority.”

SOMEA also singled out facilities head Peter Romain, blaming him for October’s surprise revelation that ventilation work thought to have been completed was not done.

The discovery led the school district to postpone by two months a partial return to in-school instruction to mid-January and brought to light a litany of ventilation issues in classrooms across the school district’s 11 buildings. At the time, business administrator Paul Roth, echoing other SOMSD officials, declined to detail what had transpired, citing personnel privacy laws, but said that “things are being handled the way they’re supposed to.”

Yet SOMEA’s letter states, “No adverse action was taken against Mr. Romain, and inexplicably, he remains the advisor to the district on matters of safety and compliance.”

Asked what changes the school district had made to avoid another similar surprise, Eustache wrote, “Verification procedures have been put in place to ensure work completion.”

On Wednesday, the Board of Education extended its executive session, which is not open to the public, to 90 minutes before its regularly scheduled meeting on Monday, Feb. 22.