More than one-quarter of all classroom ventilation equipment in South Orange and Maplewood public schools lack working fan motors, according to a report released by the school district on Wednesday. The details emerged a day after a small segment of students resumed in-class instruction for the first time since schools closed 10 months ago amid a rise in COVID-19 cases. 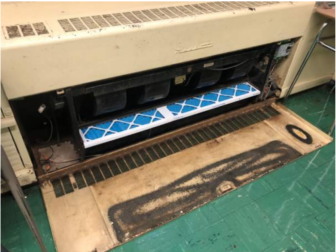 A photo in the facilities report shows a new filter installed in a classroom heating unit.

The South Orange-Maplewood School District hired Spiezle Architectural Group after discovering in the fall that preparation work that was supposed to have been completed ahead of a planned mid-November reopening had not been done — a development it alluded to at the beginning of the report.

“During the October 19, 2020, Board of Education meeting, after verification from the Facilities Department lead, it was shared that the classroom unit ventilators were serviced,” the report begins. “Unfortunately, the district’s extensive inspection and investigation revealed that this was simply not true. Work was not conducted as reported.”

Spiezle examined 437 ventilation units across SOMSD’s school buildings, finding that 322 had working motors, 81 motors were not running, and 34 units had no motor.

More than half of Maplewood Middle School’s 57 ventilation units, or 56 percent, were inoperable, followed by Seth Boyden and South Mountain elementary schools, with 45 percent and 40 percent of their units inoperable, respectively.

The report found that approximately one-fourth of the ventilation units in Clinton Elementary School and South Orange Middle School had non-working motors.

Only the Montrose Early Childhood Center and the South Mountain Elementary School Annex were found to have fully functioning ventilation equipment.

The report also detailed the cleanliness of the units, noting that all of them appear to have been vacuumed and cleared of dirt and debris, adding, “This does not mean they are clean, only that they are not filthy.” Thirteen percent of all units were reported as not being clean. 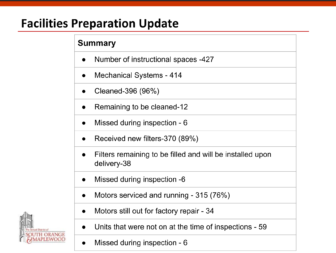 Spiezle also noted that some ventilation units lacked control of dampers to regulate the amount of fresh air drawn into the room. “There are several that have had the outside grill blocked off, probably due to the fact that there is no control over how open they are and are providing too much outside air causing the unit to freeze,” the report said. Just 4 percent were deemed inadequate.

In walk-throughs of all 11 of the school district’s buildings last week with officials, representatives of the South Orange-Maplewood Education Association detailed a wide variety of concerns around the COVID-19 mitigation steps that had been taken. Among their concerns were non-functioning ventilation equipment, dirty or missing air filters and the lack of signage to remind students and teachers about proper hygiene and distancing.

School district spokesperson Anide Eustache said that SOMSD was working to address issues that had been identified, noting that 96 percent of units have been cleaned, 89 percent received new filters and “315 motors were serviced and running.”

“We’ve spoken to building principals if a room is unusable, they have determined an alternate location and the room can be used when work is completed. Rooms can be used if windows are open,” Eustache added.

In its most recent update, SOMSD sought to alleviate concerns. “Since the inspection, the district continued to perform maintenance on all HVAC units; therefore the status of work reported in the attached report does not reflect the work that was completed from the time of inspection,” it wrote. “Schools were notified that spaces that do not have functioning mechanical units should have windows open when the room is occupied.”