South Orange – Maplewood School District students in grades 3-11 have received their scores on the new Partnership for Assessment of Readiness for College and Careers (PARCC) tests, which replaced the NJ ASK last year.

“We will be presenting district and school level results at the January [Board of Education] meeting,” said a SOMSD district spokeswoman. “We just received the numbers on November 30th, so need a few weeks to fully analyze and be ready to report out on them. The State is still in the process of releasing comparative reports, so we are not yet able to assess how SOMSD students’ scores compare to other NJ Districts or other Districts in our District Factor Group. We hope to have this information in time for the January Board meeting.”

Parents and guardians recently received letters from Paul Roth, the district’s Chief Administration Officer and Director of Assessment. The tests were the subject of controversy in New Jersey as well as in other states, and became the focus of an “opt-out” movement.

Roth’s letter told parents that their child’s and the district’s performance on PARCC “…may appear lower this year as compared to prior years. These new tests measure more complex, real-world skills such as critical-thinking, writing and problem solving.” Roth said this was a “transition year” and the tests cannot be compared to previous NJ ASK scores. 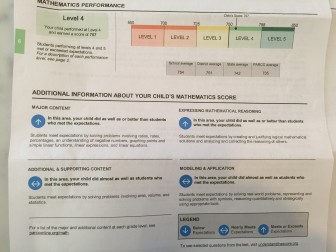 The scores, for Mathematics and English Language Arts/Literacy, place students on a scale of Level 1 through Level 5. Students performing at levels 4 and 5 are considered to have met or exceeded expectation. Individual student scores are compared to the school, district and PARCC averages.

The reports also give additional information about how students did in certain specific areas of the tests compared to students who met the expectations.

For more information about the PARCC assessment visit this website.