The Columbian: Breaking The Barrier

With all schools in New Jersey in distance learning mode, the dedicated staff of Columbia High School’s award-winning student newspaper, The Columbian, proudly present their second on-line edition at chsthecolumbian.com. The following guest column “Breaking The Barrier” by Liv Knutsen, Staff Writer, of the Columbian, Class of 2021, was originally published by The Columbian on June 10, 2020. With permission from CHS administration and staff at the newspaper, Village Green will be posting more content from the current issue of The Columbian in the coming weeks. 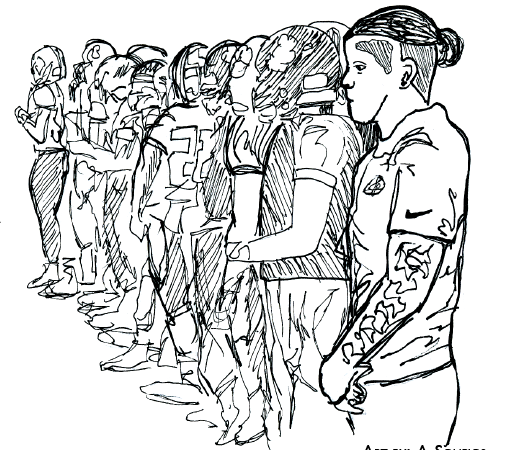 For Katie Sowers, realizing her dream wasn’t easy. Now, she has sculpted paths for the future generations of young women in ways previously unseen. Sowers played a major role in the progress seen throughout 2019 and 2020. Sowers is the offensive assistant coach for the San Francisco 49ers, becoming the first woman to ever coach in a Super Bowl. Female coaches in male dominated sports —and especially major league sports—are a total reimagining of societal norms and boundaries.

Sowers has been a member of the 49ers coaching staff since 2017, originally joining to work with the team’s wide receivers. She joins a growing list of women coaching in male professional sports. Others include Jennifer King, a full-year coaching intern for the Washington Redskins; Sarah Thomas, the first female National Football League (NFL) referee; and Haley Alvarez, Assistant Director of Scouting and Baseball Operations for the Oakland Athletics.

Though this is a groundbreaking evolution for the women’s rights movement, it could be faced with skepticism. The media plays a key role in the interpretation of such events. Sowers’ feature in a once recent Microsoft commercial is a large part of the story, catapulting her into the national conversation. Miles Tremble, ‘21, believes “media can be a tool and a platform for social justice so it’s important we properly use it as such when fighting for these causes.” Media coverage can put Sowers and other women in a position to reach people across the country and tell their stories. 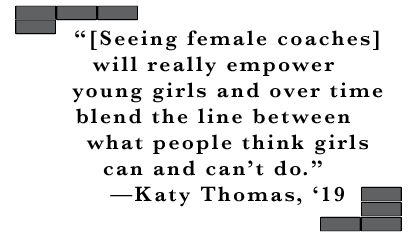 Female coaches may be able to bring a new outlook to player development in professional sports. Perspectives on team dynamics as well as approaches to players can differ from those of a male coach. Coach Lindsey Clesmere, a physical education teacher and girls varsity soccer and softball assistant coach at Columbia High School (CHS), said, “I definitely predominantly had male coaches and I don’t think I ever thought twice about it.” Women could provide a closer connection between player and coach. “I think that women can bring a softer approach in terms of emotions with athletes,” she continued.

The long term impact of what is seen today is impossible to predict. A wave of change may cause a ripple effect, but just what does this entail? Katy Thomas, ‘19, believes, “[Seeing female coaches] will really empower young girls and over time blend the line between what people think girls can and can’t do.” Watching females coach in professional sports, and especially those dominated by men, can have a big impact on the future generations of young women. It can open their eyes to opportunities and goals previously thought of as unachievable.

In an enterprise almost completely dominated by men, female coaches stand out in professional sports. Since 2015, seven full-time female coaches have worked in the NFL. Women are becoming more confident to seize their chances. Sowers still continues to strive to reach bigger goals, she says to NBC, “I would love to see myself as head coach someday.”Designer: S. Mannion