Maplewood wants to keep the developers of a long-delayed construction project on a “short leash” until the building’s ribbon cutting, after township officials learned Tuesday night the project’s completion was pushed back yet again, by several weeks. 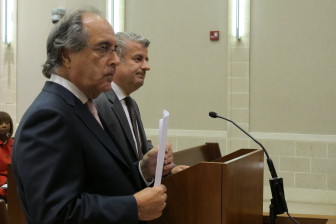 Township committee members did not mince words when two representatives of Daibes Enterprises LLC, the developer of the mixed-use building on Springfield Avenue, appeared before the committee again for an update on the troubled project.

“Keeping this project on a short leash is my preference,” said Township Committeeman Marlon K. Brownlee. “That seems to be what keeps the project moving forward.”

Joseph Vena, an attorney for the developer, said construction was recently hampered by a disagreement with an adjacent property owner, which has since been resolved.

Although the developer has missed its Aug. 30 deadline of having a roof on the building, Vena insisted the project remains “on schedule” and the ongoing construction was “going along pretty well.”

However, Mayor Vic DeLuca said in an email after the meeting that the schedule is pushed back about three to four weeks at this point.

“…towards the end of our meeting I asked our attorney to instruct Daibes that going forward, they are to proactively advise us if they encounter any significant delays,” said Brownlee in an email. “At our July 15th meeting, they indicated that the roof would be completed by the end of August. When I asked them about the status of that, I was not pleased to hear more than two weeks after they missed their deadline that they are estimating that it will be yet another two weeks before the roof will be complete.”

DeLuca said the problem had since been sorted and the air conditioner will be relocated this week. Once that is done, the eastern block wall will be finished and the roof supports can them be put in place, which will allow for the construction of the roof.

Gus Lita, the owner of Lita Brothers Construction which is doing the construction for the project, said he expected the exterior of the building to be “completed” by the end of 2014 as work continues inside.

Lita said that environmental issues on the property — including the removal of underground oil tanks and soil remediation — have been resolved.

If construction continues at its current pace, Lita predicted the building will be completed by April or May of 2015.

While Vena said he does not foresee coming back before the township committee again, DeLuca said the city will nonetheless remain vigilant about keeping the project on schedule.

“We will keep an eye on you,” DeLuca said. “Stay on schedule.”