Maplewood Police Chief Jim DeVaul expressed his gratitude for the appointees. “As you look around this Zoom room, the representation of volunteerism from both our Maplewood and South Orange clergy, it really speaks for itself,” DeVaul said.

The chaplain force has members of the faiths of Christianity, Islam and Judaism.  DeVaul started the program in 2018 as “an outgrowth of major discussions about the culture of policing in Maplewood.” Efforts to forge community relations with faith organizations go back to 2015.

“…as things are getting back to normal my chaplains are asking me to become more involved, and I really credit them and their willingness to get involved,” said DeVaul. “….they help out the police department, the police officers, and they are a great asset to the community and I want to thank them.” 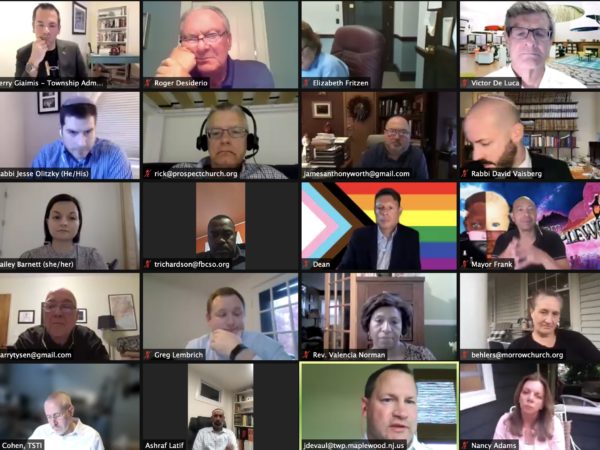 “To have this leadership of the faith with us this evening, especially in the last year and a half plus during COVID, everyone turned to all of you…. for faith, for words, for guidance, for safety, for stability and all of you were there for all of your flocks,” McGehee said.

He concluded, “…without your words and your thoughtfulness, a lot of us would have had a more challenging time as we continue to get through this, this pandemic, so you were the leaders of our community, and I can’t say more than just thank you so very much.”

“…. [W]e have a lot of folks here but especially our police department, they’re people who work enormously hard, and often [in][ thankless positions to make sure to keep our community safe, to allow us to all really flourish,” Vaisberg said.

Vaisberg continued, “I want to be here to be of support to those people who give so much and who also like us sometimes make mistakes, who more than us face a lot of trauma. And I think it’s good for us to give back however we can, and this seemed like a wonderful way to give back so I’m grateful to be here with all of you.”

Rabbi Daniel Cohen said he was glad to be part of a model of what the world needs.

“I really look at our towns and I see us right now as sadly being outliers, but being models,” said Cohen. “And I think what the chief has done with the chaplaincy program, and Mayor what you and the town council have been doing really stands out right now…to work to focus on bringing people together rather than tearing us apart.”

As reported previously on the Village Green, the chaplains have their own office at the Maplewood police and court building on Springfield Avenue where they can meet privately with officers and get to know them on a personal basis, providing guidance and counsel.