12 Stories of Giving in South Orange and Maplewood in 2014

The South Orange-Maplewood community reacted with generosity to many calls for help in 2014. As The Village Green started our “soft launch” in June, we began covering these stories. Here’s our list — in no particular order — of our top postings about local giving for 2014:

Memorial Mass, and Swim-a-Thon, for Monet Armenia When local mom Monet Armenia lost her battle with breast cancer this past summer, the South Orange Dolphins Swim Team — of which Armenia’s two children, Jackson and Aidan, are members — held a Swim-A-Thon at the South Orange Community Pool to $10,000 in memory of Armenia and to set up a fund for the boys.

Hundreds Volunteer in Bone Marrow Donor Drive Nearly 500 volunteers — including members of the Maplewood and South Orange communities — had their mouths swabbed on December 21 in a quest to find a bone marrow donor for Oren Warter, a 44-year-old Livingston father of three who has been diagnosed with an aggressive form of leukemia.

Toy Drives – PBA and Parenting Center The SOMSD Parenting Center, with the help of the South Orange Elks Club, collected toys for hundreds of families and children this December. Last year, the drive benefitted more than 155 families and nearly 500 children. The Maplewood Policemen’s Benevolent Associations Local 44 and 44A also participated in a holiday Toy Drive to distribute toys to less fortunate children in the community — beyond those who are in the school district.

Raising Funds for New School Playgrounds/Outdoor Learning Centers In June, local art collector Patricia Bell offered her home to host a wine tasting, led by Hank Zona of The Grapes Unwrapped, and a cocktail reception catered by Blue Plate Special this past June to raise funds for the construction of an Outdoor Learning Center for the Seth Boyden Demonstration School. The Jefferson Playground Project launched this fall after the district removed old and rotting equipment at Jefferson School; the group is working to raise $5,000 by the end of 2014 and $100,000 overall.

Columbia High School Gives Back From Dec. 1-12, the Columbia High School Library, in partnership with the Columbia HS Key Club, will help restock local food pantries for the upcoming holiday season by offering a two-week-long Food for Fines program. CHS was also a dropoff location for the “Ladies of Leadership” clothing drive for homeless families in Essex and Passaic County; items were dropped off at a classroom through December 19.

Newstead 5K for the Achieve Foundation For 12 years, the  annual Newstead 5K for Achieve has been raising funds for the Achieve Foundation, supporting all of Achieve’s programs, including teacher grants, volunteer tutors, technology upgrades and more for children in the South Orange-Maplewood School District. The annual race in the Newstead neighborhood of South Orange has become a highly anticipated local event for the South Orange and Maplewood community and attracts serious runners from the towns and the surrounding area, with more than 500 registrants last year. The Two Towns 5K Turkey Trot also raised funds for worthy causes — the Seth Boyden and Tuscan school PTAs.

Broadway Talent Raises Funds for Achieve Foundation Broadway performer and Maplewood dad Charlie Pollock performed live on December 19 at The Woodland in a Holiday Concert to benefit the Achieve Foundation. Proceeds will directly benefit children in the South Orange-Maplewood School District who need access to musical instruments and music education and enrichment. Local realtor (and Charlie’s wife) Vanessa Pollock organized the event and will update The Village Green shortly on the amount raised. 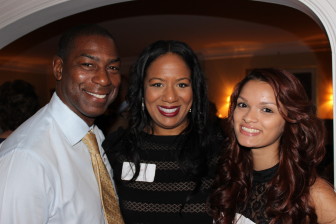 CHS Scholarship Fund Students Tell Their Stories Two students related their personal stories at a fundraiser at the home of Tom and Jeannemarie Kerns after receiving support from the Columbia High School Scholarship Fund which was established 85 years with the “sole purpose of providing financial assistance to Columbia High School seniors and graduates needing help to pay for higher education of any kind.”

Park Wood Donates Holiday Dinner to Seniors Park Wood Diner owners Pete and Fifi Kikianis brought holiday cheer to the residents of the Irvington Avenue Senior Building with a complimentary dinner on December 18. The idea for the dinner arose when Pete Kikianis asked Maplewood Mayor Vic DeLuca what he could do to give back to the community. DeLuca suggested a dinner for deserving seniors.

Ebersole Headlines ‘FurBall’ Fundraiser at The Woodland Two-time Tony Award winner and Maplewood resident Christine Ebersole and a slew of Broadway names donated their time and talent on November 10 for a gala performance to raise funds for the Maplewood-based Furry Hearts Rescue, an all-volunteer organization that has implemented a TNVR (Trap/Neuter/Vaccinate/Return) program to reduce the town’s feral cat population and provides medical care and food to abandoned and homeless cats and dogs, and is dedicated to finding foster and permanent homes for these neglected animals.

Maplewood Couple Inspires Dr. Oz ‘Shine a Light’ Challenge  Mary and Angelo Vayas — who own the Village Trattoria restaurants and No. 165 —  appeared on the Dr. Oz show in December to discuss Angelo’s battle with a rare form of brain cancer called Glioblastoma Multiforme, or GBM. In honor of the Vayases, Oz launched the Shine a Light Challenge (#shinealightchallenge) to bring awareness to brain cancer — asking people to take selfies while holding a light bulb over their heads, tag three friends and post it on Twitter with the hashtag #shinealightchallenge. The goal is to encourage people to donate to the American Brain Tumor Association, to fund research and treatment and to find cures.

Rent Party Family Picnic Celebrates 5 Years of Fighting Hunger Since October 2009, Rent Party has presented live music events, with the proceeds supporting two local food pantries — Our Lady of Sorrows in South Orange and St. Joseph’s Church in Maplewood. Rent Party has also built and maintains 30 raised garden beds, in cooperation with the South Orange Elks and the Maplewood Community Garden, that provide more than 2,000 lbs. of fresh produce to the pantries they support. Rent Party’s Back Pack Pals program provides a weekend’s worth of food to an average of 80 food-insecure children in the South Orange-Maplewood School District.

South Orange Police Put Down Their Razors to Fight Cancer Officers from the South Orange PBA Local 12 unit participated in N0-Shave November, a longstanding fundraiser spearheaded by the American Cancer Society (ACS), where participants agree to stop shaving for a month to raise money for the organization.

Know of another great story of local giving? Tell us in the comments or email us at villagegreennj@gmail.com.