What’s it like to plunge into the Atlantic Ocean in frigid temperatures — on purpose?

This is the third time Peggy Excell, owner of Lotus Petals in Maplewood, has participated in the Coney Island Polar Bear Club Swim, an annual event where thousands of brave — or foolhardy, depending on one’s opinion — participants plunge into the icy Atlantic Ocean on New Year’s Day. 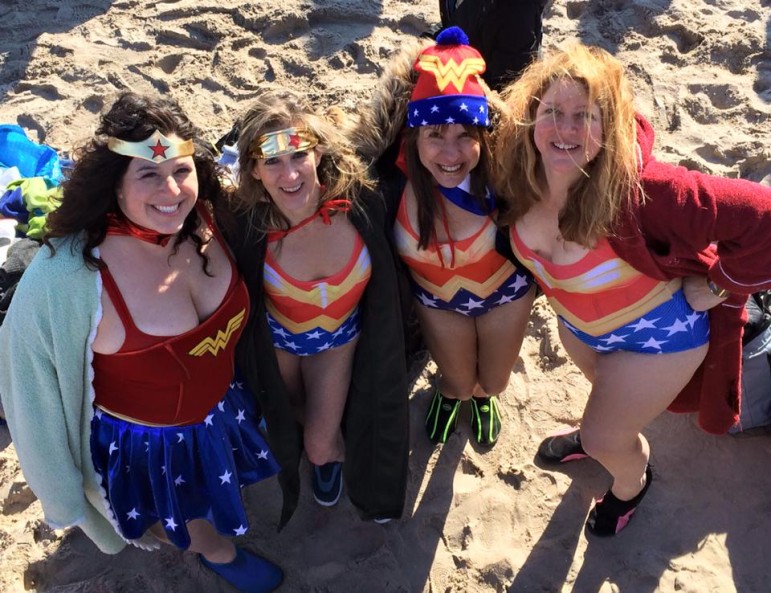 “This is my third time,” said Excell, who has participated with a different group of women each year. This year her partners in crime were Lisa Duggan (from South Orange), Jennifer Weiss-Wolf (Maplewood) and Jennifer Grieshober Griola (West Orange).

Excell described the moment: “Waiting on the beach, with the cold wind whipping around you is just about as hard as actually going in the water. The wind was so fierce this year that there were sand clouds blowing down the beach. But in actuality, the water temperature is warmer than the air. But still reallllly cold. It’s when you take off your coat/robe and are standing there in a bathing suit that it really hits you. Going in the water is shocking. Frigid, as you’d assume. By the time you get in up to your chest, your feet are numb. The waves are splashing over you, making you that much colder. But then you’ve got people like Jen Griola… who just dove right in, head first. It makes you feel as alive as you can feel.”

EMTs and firefighters stand by on shore in case of an emergency, but Excell said she has yet to see anyone who needed medical attention. “My first time doing it, I was a little freaked out by seeing a gurney waiting at the end of the boardwalk in case it was needed,” she said.

Crazy costumes are part of the fun; last year Excell wore a bikini and a Viking helmet. This year, the group donned Wonder Women garb. Not surprisingly, the outfits drew a fair amount of attention. Check the ladies out in this post on Gothamist.

Excel said the general atmosphere is upbeat and festive, with a DJ on the boardwalk, lots of laughing and dancing and people taking photos of each other.

Registrants pay a $20 fee that goes to Camp Sunshine, a summer camp for sick children. Participants can also purchase a T-shirt that says, “Camp Sunshine – Freezin’ for a Reason” on the front, and on the back, “I DID IT!”

Apres plunge, folks get a certificate, then change into dry clothes. “We drop our wet stuff off and hit the boardwalk for a bite, (we kinda sip at schnapps or sambucca while on the beach, you know, for warmth) then go out and dance,” said Excell. “It’s just a big party.”

Thinking of taking the plunge next year? Here are Excell’s tips: Bring a plastic bag for wet clothes. Wear water shoes or old sneakers so you don’t have to deal with cutting your feet on top of the cold. Bring a change of warm clothes and a “can do” attitude. “It’s not for the faint of heart,” she said.

What possesses people to strip off their clothes and enter water that hovers around 40 degrees?

“We do it because it’s an empowering way to begin the new year,” said Excell. “On our terms. Strong. Powerful. Fearless. In charge of our own destinies. Like grabbing the year by the hand and saying “This is how we’re gonna do this…”

She described a camaraderie that is almost inexplicable. “We all run into the ocean holding hands. People think it’s crazy. And maybe it is. But it’s actually a very proactive, symbolic way to set an intention and direction for yourself going forward for the remaining 364 days of the year. We call it #polarbearmagic.”