‘Stark and Sobering’: As COVID Surges in Maplewood & South Orange, Leaders Implore Residents to Stay Home and Mask Up

As the number of COVID-19 cases continues to skyrocket across Essex County, the state and much of the country, cases in Maplewood and South Orange have risen to levels not seen since the spring.

“Our numbers are stark and sobering,” said Maplewood Health Officer Candice Davenport at Tuesday’s Township Committee meeting. At the last presentation, Maplewood had 417 cases. As of today, November 17, Davenport reported 508 cases — 92 in the past 2 weeks.

Acknowledging that many are experiencing “pandemic fatigue” after eight long months, town leaders and health officers are asking residents to double down on precautions like social distancing, hand washing and mask wearing —  especially as the holiday season and the cold weather approaches. Many recent spikes have been traced to private indoor gatherings, where people often let down their guard.

“We are moving the needle in the wrong direction, and it is taking a toll on our healthcare system, our public health system and on the essential workers who are putting themselves more and more at risk every day,” Davenport said.

Most cases in town are from people who have prolonged contact — often unmasked and indoors — with people who have COVID, she said. There are numerous examples of people in the same household getting infected, “which speaks to how quickly COVID-19 can pass in an enclosed space.”

Davenport said, “these instances are preventable if we follow public health practices.”

Officials are also encouraging residents to get tested. Here’s a list of in-person and at-home testing available in NJ. Some require appointments in advance, and the turnaround time for results can vary widely — so plan ahead, especially as Thanksgiving draws near.

COVID Locally, by the Numbers: A Steep Climb 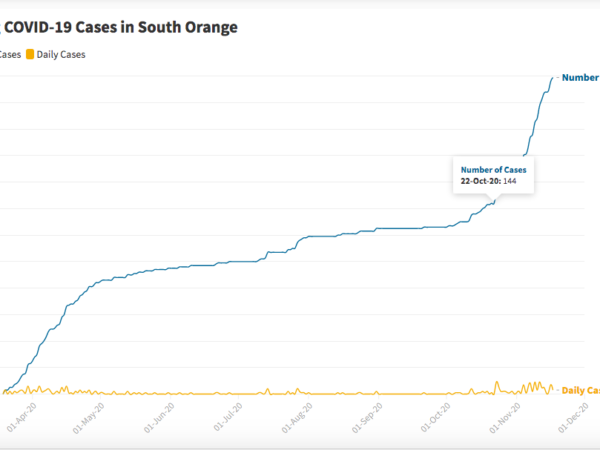 Seton Hall University: 159 cases as of Nov. 16 (most of SHU’s cases are counted in South Orange’s case count)

The numbers of reported cases in both towns have surged since early- to mid-October, after falling in the summer.

South Orange VP Sheena Collum recently pleaded with residents to continue practicing good behavior. “We are absolutely in a second wave,” Collum said at the most recent Board of Trustees meeting, noting that South Orange’s numbers were exacerbated by SHU. “This is so critical. It’s so important. We are all so exhausted by this.”

Maplewood Mayor Frank McGehee said last week that the town was “moving back into a mitigation stage.” In other words: we are past the point of trying to contain the virus.

On Monday, after a record-breaking surge of cases in New Jersey, Gov. Phil Murphy ordered that indoor gatherings be limited to 10 people (down from 25), and outdoor gatherings to 150 (from 500).

Last week, calling the recent surge of the pandemic “devastating,” Murphy issued a new executive order establishing a curfew of 10 p.m. for indoor dining and banning bar seating. He also permitted individual towns and municipalities to enact their own curfews of 8 p.m. for non-essential businesses.

Murphy hasn’t ruled out taking more drastic steps, something akin to the lockdown he ordered in March.
At the moment, neither South Orange nor Maplewood leaders are considering imposing an earlier curfew on restaurants or retail. “We are currently working with all of our businesses areas, SIDs, and across all industries in town…to highlight resources available and to extend a collaborative hand regarding how to address the recent executive orders,” McGehee said.

South Orange-Maplewood schools have been closed since mid-March and will remain closed until mid-January. (So far, Murphy has said he does not plan to close the state’s schools again as he did in March.)

Last week, with less than two weeks left in the semester before Thanksgiving break but with the virus surging through the school community, Seton Hall pivoted to all-remote learning. The men’s basketball season was suspended because of COVID diagnoses among athletes and coaches. The University had previously said there were clusters among Greek houses and sports teams.

The University continues to provide surveillance testing to students and has begun its pre-Thanksgiving testing protocol, urging all students to be tested before returning home for the holidays.

“The school is taking the appropriate steps to combat this disease,” said South Orange OEM Director Scott Egelberg last week. “Unfortunately, the University can’t watch every student 24/7. Therefore, the students really need to listen to what the University officials are telling them. They need to stop with the gatherings, wear a mask, social distance and follow all the guidelines…” If they don’t, he said, student “face consequences with the University or with our police department.”

Egelberg said residents who see what they believe is a violation of executive orders should contact the SOPD. The town investigates all complaints, but the majority are handled without summonses. “If the police ask a student or resident to put a mask on and they comply, summonses aren’t needed….the village isn’t looking to penalize anyone unless it’s absolutely necessary.”

South Orange Police Sgt. Richard Lombardi said last week that to date, the police department has not issued any complaints or summonses for COVID violations. He noted that SOPD works in partnership with township leaders, the school district, SOVCA and Seton Hall to “educate our community on what steps are necessary to safely abate this pandemic.”

Lombardi said when the police department receives complaints about large indoor gatherings — such as, for instance, with Seton Hall students — they sometimes issue summonses for noise violations. However, he said, “None of these gatherings have reached the threshold to warrant further investigation under the guidelines set forth by the Governor’s Executive Orders…”

Now that Murphy has lowered the indoor gathering amount to 10, that might change.

Asked about how the police department enforces mask wearing in the town, Lombardi said that officers engage the community, “by responding to…calls for service and through self direction, to inform the public to wear masks when social distancing is not possible.” He continued, “Fortunately as more information has become available about the transmission of the COVID-19 virus, we’ve seen a dramatic reduction in calls for service regarding mask wearing in public places.”

In Maplewood, Davenport said that mask avoidance was not just a problem among teens and youth, but among residents of all ages. “What people don’t see are all the people who are practicing prevention,” she said at Tuesday’s meeting. “All those kids who are staying home, and are social distancing…and who are wearing masks…They’re doing the right things, the necessary things, in order to keep everyone healthy, protect one another, and to stay healthy themselves.”

She continued, “We need to stop now, and face the reality. Which means we need to wear masks at social gatherings, just like we do in public settings. And we cannot gather in large groups for now, and we cannot stand closer than 6 feet to those who are not of our household. We shouldn’t go indoors probably at this time. All of this is to prevent further spread of disease.”

“The numbers alone speak for themselves, but I think it’s fair to say that it’s our behavior as people…having indoor activities…that’s part of the issue that we need to really address,” said McGehee on Tuesday. “You need to wear a mask…Everywhere you go…Playtime is over.”

Vaccines on the Horizon; But First, Making it Through the Winter

A spot of good news came in the last week when both Pfizer and Moderna said their vaccines were found to be 90% and 94.5% effective, respectively, in clinical trials. New Jersey announced its plan to distribute vaccinations once they are ready, which will likely be sometime in the spring.

But that is roughly six months away, and residents will have to hunker down and continue to take precautions until then. “Let’s get through the remainder of this fall and winter together,” said Murphy in a press conference on November 9. “Let’s work harder knowing that if we can beat back this pandemic today, we can ultimately defeat it for good this spring.”