The following is from South Orange Performing Arts Center: 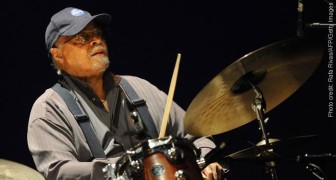 Legendary Jazz drummer, Jimmy Cobb is the elder statesman of all the incredible Miles Davis bands. His inspirational work with Miles, John Coltrane, Cannonball Adderley and Co. spanned 1957 until 1963, and included the masterpiece Kind of Blue, the most popular jazz recording in history. He also played on Sketches of Spain, Someday My Prince Will Come, Live at Carnegie Hall, Live at the Blackhawk, Porgy and Bess, and many, many other watermark Miles Davis recordings.

He did his first recording with Earl Bostic and played extensively with Dinah Washington, Billie Holiday, Pearl Bailey, Clark Terry, Dizzy Gillespie and Cannonball Adderley before joining Miles Davis in 1957, becoming an integral part of the band’s signature sound into the next decade. Mr. Cobb continued to work with renowned jazz musicians including Sarah Vaughn, Sonny Stitt, Nat Adderley, Ricky Ford, Hank Jones, Ron Carter, George Coleman, Fathead Newman, The Great Jazz Trio with Nancy Wilson, Dave Holland, Warren Bernhardt, and many others worldwide as he reinforced his reputation as one of the greatest drummers in jazz history.

Giants of Jazz was founded in 1997 by John Lee to honor Jazz musicians and to keep Jazz alive and well in the South Orange area, which many musicians call home. It was devised as a way to not only honor excellence in musicianship, but also to award those who have had an impact within the Jazz community through teaching and mentoring younger musicians.

SOPAC programs are made possible in part by the New Jersey State Council on the Arts. The South Orange Performing Arts Center (SOPAC) is a 501(c)(3)charitable organization. SOPAC received funding through a grant from the NJ Department of State, Division of Travel and Tourism, visitnj.org.