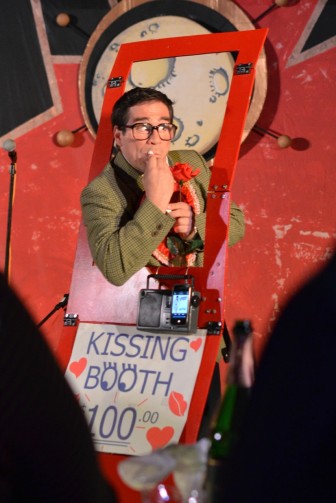 Mark Gindick plays a clown with a kissing booth.

You didn’t need to whisper a password into a peephole, but in all other ways, Saturday night’s sold out Speakeasy at The Woodland was a decadent thrill. Patrons — some in period attire — sipped champagne cocktails while being entertained and amazed by a spirited array of musicians, magicians, dancers and — just to stay true to the era — a clown in a thong.

The strongest performance of the night was magician Asi Wind. A Speakeasy veteran (he performed at the last Speakeasy in March 2013), Wind combines sleight of hand magic with mentalist tricks that had the audience gasping. Whatever your kid can do with a Rubik’s cube, this guy can do better. More than once, he selected an audience member, then plucked the name of a distant friend or relation out of the air.  A rabbit in a hat couldn’t have been more amazing.

Studio B is a local enterprise, founded by Jenny Turner Hall and Marcy Thompson, dedicated to both staging performance events for South Orange-Maplewood’s community, and providing a platform for the countless creatives who make our towns home.  This is the third Speakeasy they’ve produced, and like all the others, it featured some homegrown talent along with a few artists who crossed the river from that island to the east.

More than a couple proud parents were in the crowd to applaud a group of CHS graduates now making their way as professional musicians. They ably played jazz standards like “Don’t Get Around Much Anymore,” and rocked a few original numbers too. 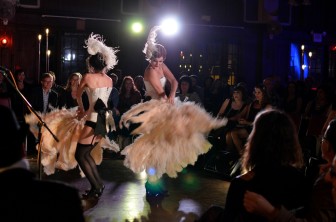 Opening the show and returning between sets were the most truly throwback artists of the night, the Minsky Sisters. Dressed in 1920s era corsets, and coyly hiding behind giant ostrich feathers, the two dancers tapped and posed like a couple of Ziegfeld’s finest.

Mark Gindick was a clown with a kissing booth in a skit that began as a sweetly flirtatious pantomime but slowly evolved into something far more extreme, debauched, and surprisingly funny.

Between acts, patrons happily chatted with friends and neighbors — an unexpected benefit of spending a Saturday night at a local performance. Café tables ringed the stage, which was decked out with a stunning backdrop by local artist Moss Freedman and lights by Cat Starmer. 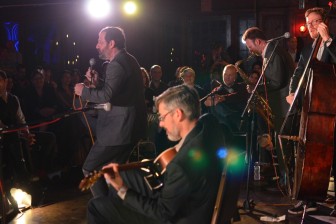 Like a true Speakeasy, the cops broke up the party and stopped the band at 11 p.m. Patrons fled under cover of night, back to their 21st Century homes. By midnight, it was all a memory.