The Women’s March on Washington on Saturday, Jan. 21, one day after the Presidential Inauguration of Donald J. Trump, is shaping up to be a historic event, with more than 200,000 people expected to attend. There are also more than 600 “sister marches” planned in towns and cities across the country, including Trenton and New York City.

More than 30 buses will be leaving from South Orange and Maplewood alone, carrying an estimated 1,700-plus women, girls — and, yes, men — to D.C. [Read here about women from Millburn and West Orange marching.] 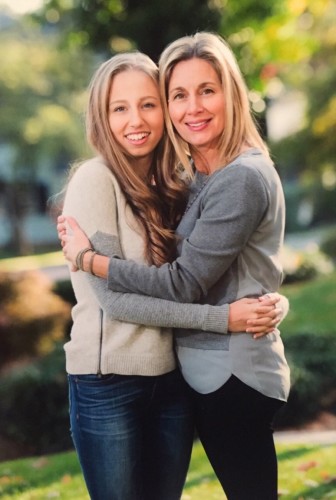 Many marchers are mothers and their daughters. Natalie Morrison, a junior at Columbia High School and Maplewood resident, will be one of them. “I’ll be marching with my mom [Sarah], and we both are very excited to have the opportunity to have our voices heard in the fight against oppression,” said Morrison. She added that this is the first time she and her mother were participating in such a large-scale protest. “For me, [Trump’s] nomination was the last straw.” Her mother sees the march as an opportunity to speak up for those who cannot, including LGBTQ women and women of color.

“I am going…because I feel it is my duty to fight for my rights as a woman,” said CHS senior Eve Greenberg, who is marching with her mother, Irene Langlois, and several friends. “With our president-elect being a known misogynist, racist, bigot and racist I am completely unwilling to just stay silent,” said Greenberg. “This march is expected to be incredibly moving as it is not a protest, but a march for solidarity and equality.”

Some local businesses are joining as well. A large contingent of employees from Able Baker in Maplewood will be on one of the buses. “We will have scones and cookies bagged and ready for people getting an early start on Saturday,” said owner Julie Pauly. Over at Cedar Ridge Cafe, employee Manuela Tauscher is headed to DC, while co-worker Ben Petty will be marching in New York City. 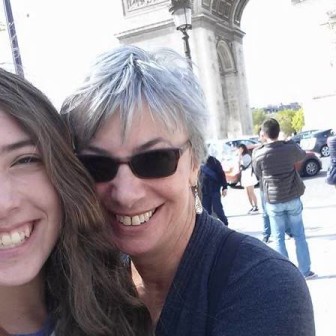 Meanwhile, South Orange resident Hildy Karp took on the formidable task of serving as unofficial coordinator and point person for the SOMA caravan. She has chartered buses, assigned captains, and coordinated with the two towns to enable parking rules to be suspended over the weekend, and serving as main communicator of all information.  “I’m pretty much managing all the logistics and managing the many folks taking on bits and pieces,” said Karp.

Karp’s role began accidentally when she sent out a Facebook post to around 40 friends in the area asking if anyone wanted to carpool or take the train together to go the march. Within 24 hours the group had hundreds of members; it has now soared past 2,000 people who hail from South Orange, Maplewood and surrounding towns. 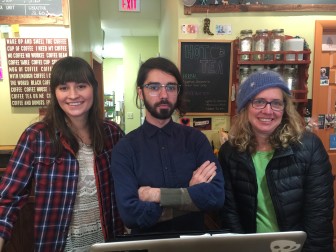 Cedar Ridge employees Manuela Tauscher and Ben Petty and customer Sandra Scher — all of whom are marching this weekend.

There are 22 buses and an additional 10 or so being privately chartered, Karp said — which adds up to nearly 1,800 South Orange-Maplewood residents headed to D.C. (and that’s not counting those who are getting themselves there via car or train).
Others who are assisting the effort include Jessi Gottlieb Empestan, who first contacted Skedaddle, a crowdsourcing site for bus trips; Caroline Taillandier Nagi, who asked SOVCA [South Orange Village Center Alliance] to donate printed South Orange logos for the buses; and Marissa Ryan, who helped draft a bus captain job description.
After Karp suggested asking attendees to purchase extra seats to donate to those who couldn’t afford them, Crystal Olsen Glynn, Deidra Tyree McLaughlin and Lisa Phillips helped coordinate that effort. Laurie Tarkan and Gina Plaitakis took the lead coordinating the buses leaving from Columbia High School. Kathleen Kargoll and her husband John spearheaded a “Know Your Rights” meeting held last week to educate marchers on what to do if they are approached by the police.
Others have held sign-making events and pussy hat knitting parties. 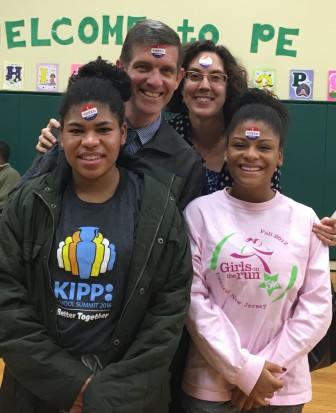 The Weeks Family: Back row, Chris and Cathy, Front row, Fernanda and Wendy

Many local residents are headed to New York City, including the Weeks family of South Orange, marching with the Eleanor’s Legacy group. Cathy Lankenau-Weeks said she, her husband and her two daughters are attending along with Cathy’s mother and sister, and several close female family friends.

Karp said she thinks Trump’s election has galvanized so many because of his “blatant disregard for women” and his “vitriol and antipathy towards so many — people of color, immigrants, women, disabled.” Trump’s cabinet picks “will have repercussions for years and years to come.”