Maplewood Board of Health: ‘Telling the Story of the Virus’

The Village Green May 11, 2020
0 FacebookTwitterPinterestEmail 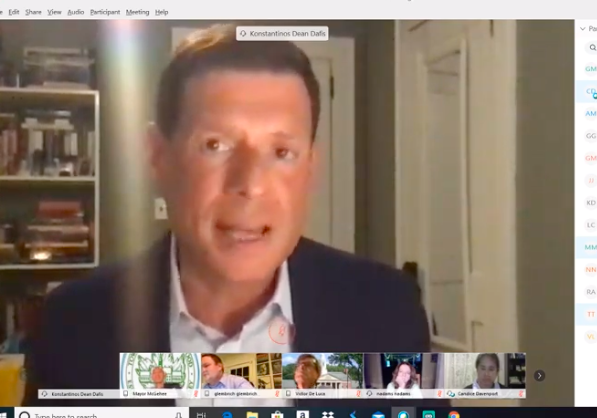 At the May 5 Maplewood Township Committee virtual meeting, Board of Health Chair Dean Dafis and Township Health Officer Candice made a lengthy presentation in an effort to give the public a more holistic look at how the COVID-19 pandemic is affecting their town of 25,000 residents.

“This evening we thought it was time after seven weeks or so of data and social distancing … to tell the story of the virus,” said Dafis. “How does this virus work and what does that look like nationally … as well as right here in our community.”

“How is it that while infections may be slowing down deaths are rising,” said Dafis.

“And what does the future look like? Science equals confidence. The data will inform the dates and how we open our society again,” he added.

Flattening the curve isn’t the end, explained Dafis, who added, “The pandemic has a new shape: the plateau.”

“While social distancing does work … the virus is still on the loose. The virus is not taking a summer break and we shouldn’t either. … The number of affected persons could be even greater. … Flattening the curve the first step, it’s not the end of the game and it’s not enough.”

Davenport then made her way through a detailed presentation (scroll down or find it at twp.maplewood.nj.us) that cited the State of New Jersey’s COVID-19 porthole. Davenport explained that she and her team have been entering local data into that porthole, as are municipalities throughout the state.

Maplewood is embedded in Essex County which has the highest death toll of the 21 counties in the state, reported Davenport, who then gave numbers for Maplewood’s positive cases (263), recovered cases (120) and negative tests (more than 400) as of May 5.

She noted that the work of the health officials doesn’t end with those numbers. There is ongoing contact tracing and support and follow up for positive diagnoses as well as all family members of those diagnosed with the disease (otherwise known as “probable cases”).

Dafis noted that “half of hospitalizations are in the ICU” and that the disease is “still very strong and spreading.” He said that New Jersey is “really in the hot zone.”

Regarding the demographics of the disease, Davenport said that, as of May 5, “deaths don’t have an impact until [age] 30-49 then increases rapidly and exponentially as you get older.” She said that age is one of the major risk factors.

“The other major risk factor are underlying conditions,” said Davenport. Those include cardiovascular disease, diabetes, immuno-depressed diseases and more.

Davenport said that Maplewood was a “microcosm” of New Jersey, tracking closely with the state overall in terms of age and ethnicity impacted by the virus.

“The ones who are getting sick are the essential workers,” said Davenport. In addition, “We are seeing cases in the elderly in long-term care facilities and nursing facilities throughout the state.”

“We fall right in the middle,” said Davenport. “What makes us different is we have a working class population who are the workers in health care and essential personnel. … We have multi-family housing units. COVID-19 tells a story about density; that’s how it can spread unfortunately.” She noted, “We have an uninsured population” and that “24% of our residents are ALICE [Asset Limited, Income Constrained, Employed]-qualified. With this economic crisis that number has probably increased significantly. As [TC member] Vic [DeLuca] mentioned, 25% our of population is renters. 18% is foreign born.”

Davenport noted that Maplewood’s first COVID-19 case was diagnosed on March 14, with those numbers going up exponentially over time. She cited a peak around April 4 then another peak on April 17. “This mimics to a ‘T’ the state peaks.”

“March 21 is when we had the social distancing mandate,” said Davenport. “Unfortunately it takes almost a month to make a difference.” She said cautioned that, “as we lift any new restriction in a month we will see more cases if people don’t continue to follow social distancing.’

“The decrease shows what social distancing has done. without it, these numbers would have gone higher,” said Davenport. “The peak would have been later and this decline would not have been possible.”

Besides social distancing, “wearing that face mask is key,” she added.

‘This disease keeps morphing and changing,” she said. “Blood clots can lead to other issues such as strokes, heart attacks and embolisms.”

Later in the presentation, Davenport gave more details about contact tracing and recovery: “We take the time to follow every patient and all their household contacts. You are not a recovered case until everyone in your household has recovered.”

Mayor Frank McGehee noted, “That ‘s 263 cases. That’s 263 phones calls and all the followups. The amount of work coming out of your office is unbelievable … a mountain of work.”

“We love what we do. We love our community,” said Davenport.

Later in the regular meeting of the Township Committee, Township Administrator Sonia Alves-Viveiros noted that the Township is looking to reconfigure the way it does business in preparation for an eventual reopening of physical Township offices. That included everything from hand sanitizers to physical barriers in the offices (“we’re working with the Historic Commission,” said Viveiros). The Township is investing in an intercom system and will be doing once a month deep cleaning.

Viveiros stressed that the opening of buildings would not happen “until the governor issues orders.”

She also added, “I recommend enhancing and promoting an online platform of doing business and processing permits online. … We were ahead of the game here. Our courts are a great example with processing of pleas and even virtual sessions now.”

“That would be the responsible way to open up.”