Update: A more extensive quote by Superintendent Ronald Taylor around access and equity has been added to provide context.

The number and percentage of sixth-grade and eighth-grade South Orange-Maplewood students of color taking advanced mathematics courses has increased over a period of three academic years, according to a presentation by Superintendent Ronald Taylor last week.

But several Board of Education members pushed for more context to the data, which they said did not clearly show the relationship between enrollment in advanced classes and the overall population of the school district.

In an hour-long presentation at Monday’s Board of Education meeting, which was held online for the 11th month in a row due to COVID-19 precautions, Taylor spoke at length about changes in student enrollment when separated on the basis of race. The presentation begins at the 2:58 mark in the online video. 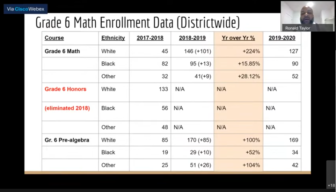 One slide in the access and equity presentation showed math enrollment data for sixth-graders.

For instance, the presentation showed that the number of white students taking advanced, sixth-grade pre-algebra classes doubled from 2017 to 2018, while the number of black students increased by 52 percent. Students identified as “other,” grew by 104 percent in the same time period. Yet there was no indication of how those figures compared to the relative populations of those student groups.

Taylor also said that when looking at students in middle school, a greater percentage of white students were in honors classes than for the district as a whole, while Black students were underrepresented. 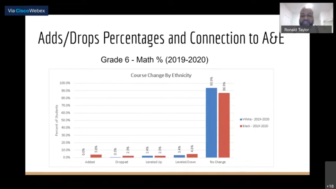 Another slide in the access and equity presentation showed sixth-graders’ math class adds and drops by race.

Board member Courtney Winkfield expressed frustration at the presentation, which began three hours into the 5½-hour meeting, and the one-question limit on discussion imposed by BOE President Thair Joshua.

“As we’re nearing midnight, I’m feeling frustrated that our engagement with this presentation, at least in the public sphere, has been reduced significantly to limiting the number of questions, certainly limiting the number of folks who are actually listening and tuning in to this presentation right now,” Winkfield said. “For me, it really draws into question — not just on part of the district but as a board — our  commitment to really prioritizing this work. 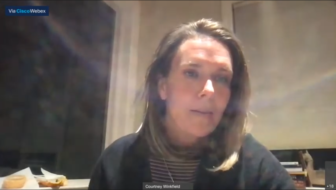 South Orange-Maplewood Board of Education member Courtney Winkfield says she was ‘frustrated’ at the access and equity presentation at the Feb. 22, 2021, meeting.

“I have far more than one question to ask, and I think that those need to be asked in a public arena, so that not only people can sort of engage in hearing what some of those questions are but also hearing the district’s response to some of these things.”

Winkfield said she appreciated Taylor’s efforts toward “designing a district that ensures the likelihood that, in particular, our most vulnerable students” will enroll and be successful in academically rigorous coursework.

“If that’s our ultimate goal as a district, we have to be willing to center data in a way that describes the current state of that likelihood,” Winkfield said. “I was disappointed to see so many data slides and really not get at the direct current state of disparity with respect to the courses that you shared.”

Winkfield added, “At the heart of any equity issue around course access is the likelihood of an opportunity being present and the degree to which students — whether you’re looking at, in this case, race — are over- or under-represented in relation to their overall demographic. I was disappointed not to see that in really a clear way tonight, and I would like for us to be able to revisit that so that we can see that.”

Winkfield said she agreed that the South Orange-Maplewood School District should be focused on “action planning to address what we know is a huge crisis in our district. But if we don’t have a clear starting point, at least from this place, we’re not going to be able to measure any type of meaningful progress once we actually begin to live out some of those action plans.”

Winkfield said more work was needed to understand the scope of the challenges facing SOMSD.

“I want to be really mindful that we don’t get into solutions because I don’t believe as a district at this point we truly understand what those issues are,” she said. “They have persisted and grown over time, and I think that even though we’ve made some really bold moves as a district to eliminate courses to change policies, it’s clear that there are some nefarious, hidden procedures that take place under the radar that we need to understand and get underneath.”

Taylor responded that it was important to address access and equity. “We want to make sure, even our subconscious of the work that we’re doing, that we’re centering this topic as more than just the topic. It’s not a part of what we do. It should be what we do. … It’s a place that we can all grow — as leaders, as a district and I’m sure even as a board.”

To Winkfield’s last point, Taylor said, “I would probably need to have more conversations with you around that to understand where we’re going there. I wouldn’t want to give a response without having a better understanding of what you mean by that.” 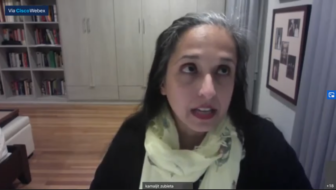 Board of Education member Kamal Zubieta says access and equity should also take into account gender and socioeconomic status.

Board member Kamal Zubieta recalled that she had raised some of the same points at January’s BOE meeting, which was presented by Assistant Superintendent for Access and Equity Gretel Perez. (The presentation took place at the 16:05 mark in video of the Jan. 25 meeting.)

“Last month, I did talk about the need for context because we showed the number of white students vs. Black students vs. those who identified in an ‘other’ category,” Zubieta said. “The data is only meaningful if we know the proportions in our school district. I would urge the same sort of analysis to be added to the presentation today in order to contextualize.”

“The data as presented assume that percentages of demographics remain static year after year,” she added.

Zubieta also said that while year-over-year data was important, it was also critical to follow the progress students are making throughout their four years at Columbia High School. She also urged Taylor to make all the underlying data accessible on the website.

Zubieta also noted, “Access and equity means more than race. It also means gender, it also means comparing students who are receiving free and reduced lunch and are economically disadvantaged — who could be of any race.

“I would like to see the data by gender because we know, for example in AP physics classes, we don’t have the same number of students that identify as females as students who identify as male,” she said.

Zubieta’s remarks led the discussion portion of the meeting, which began at the 3:50 mark in the online video.

Board member Susan Bergin was interested in data around individual educational programs (IEPs) by race and students in honors classes by IEP status, noting that there were some AP classes with no support access for those students.

“This really should’ve been a whole presentation by itself,” Board member Elissa Malespina said, noting that it was near midnight. 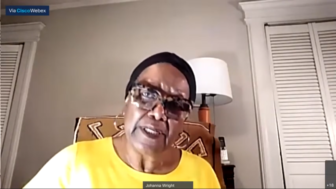 Board member Johanna Wright said she would like to see “a more granular report on how the budget will support students,” and she added that she was concerned “that we did not mention special ed or ELL,” or English-language learners.

As chair of the BOE Finance, Facilities and Technology Committee, Wright also said that she was surprised to hear Taylor mention the prospect of hiring Seattle-based consulting firm Equal Opportunity Schools to aid the school district’s efforts to improve diversity in advanced courses.

“I have some real concerns with bringing in a third party,” she said. “We have an assistant superintendent of equity, we have an SLT leadership that’s supposed to be best in class. We have new everything, and we keep adding, but we’re not adding anything for children. I saw nothing in the budget that covered kids. So when are we going to be covering kids?”