There’s plenty of work ahead for Superintendent Ronald Taylor and South Orange-Maplewood School District officials as they embark on an ambitious plan to upgrade and expand educational facilities over the next two years, while also integrating the student population to reflect the diversity of the two communities.

In his first town hall meeting since he officially began work nearly three months ago, Taylor outlined his vision for high educational achievement, employee responsiveness and the process to meet the district’s goals by the beginning of the 2021 school year. 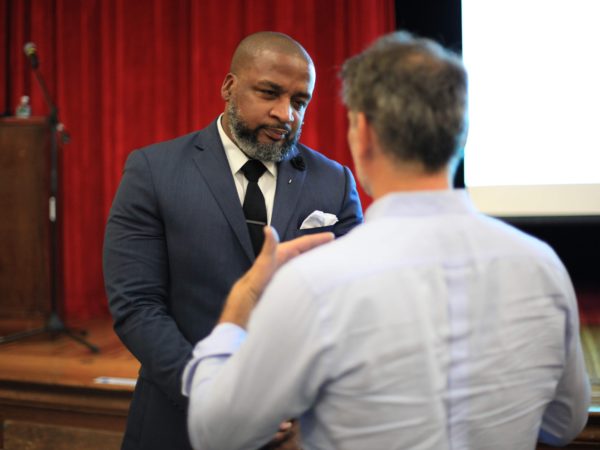 “We’re also going to have a lot of discussions about the development of our reconfiguration/integration plan,” Taylor said at Wednesday’s event, organized by the district’s Parenting Center and held at Seth Boyden Elementary School. “We’re bringing in a lot of experts to see how things have been done in similar communities, and we’re looking at how they were done successfully and what they cost and all the details that it takes for us to recommend a decision that I view as a generational decision.”

Taylor also emphasized the historic nature of the school district’s Long-Range Facilities Plan, a nearly $160 million project — the bonding for which was approved by  in June — that will involve adding classroom space and reconfiguring the elementary schools throughout South Orange and Maplewood.

“We’re not going to do another $160 million construction project 10 years from now, even 20 years from now,” he said. “It took us decades to get to the point where we’re able to have this opportunity, granted from our community. So we’re taking it very seriously.”

Taylor said that there is “a lot of work” ahead before any decision is made on the “correct direction for our school district,” adding that educational experts would be brought in, including those with an “equity lens.” The changes that lie ahead are likely to cause “a large amount of angst” among students, parents, teachers and principals, he said, adding that he intended to keep the community involved and informed via the new district monthly newsletter.

“I want to answer all your questions before you even ask them by doing our due diligence,” he said.

After the meeting, Taylor said he hoped to begin discussing proposed integration plans in early spring, along with more details about the construction projects to be embarked upon. 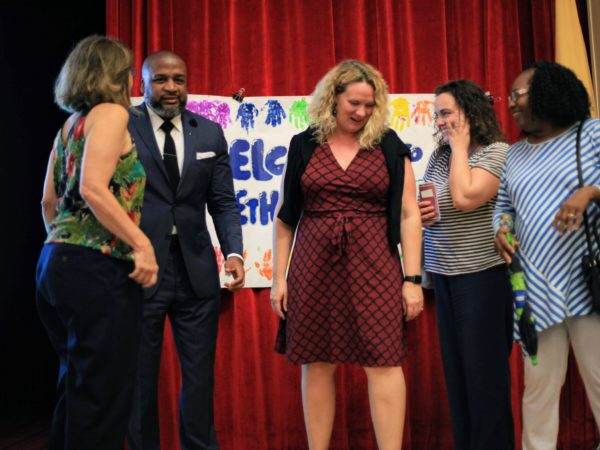 As he did in his first public meet-and-greet in May, Taylor also emphasized that he would incorporate district-wide educational data in the decision-making process. “What gets monitored gets done. We don’t make haphazard decisions. We use data to help us make informed decisions.”

Taylor said he was a believer in “management by walking around” and seeing first-hand how schools, events and classrooms are running. “And people tell me the darnedest things,” he added.

Some of the expectations Taylor laid out for all district staff includes acting with respect, honesty, integrity and ethics. “When my principals have an issue in their schools, they’re going to handle it with integrity,” he said. “You don’t have to worry about if I’m telling you the whole truth.”

He said he expected district staff to operate with a high level of professionalism, even though “we may not be able to say yes to every request” from students and parents — whom he viewed “as our customers.”

Taylor characterized the school community as “a family” and repeatedly emphasized the concept of educators as servant leaders, adding, “We are in the people business. We should be focused on being great people, by setting the example, and fostering the development of great little people.”

After his presentation, Taylor answered questions from the audience, taking notes on each question and answering them as they were raised (as he has done in BOE meetings after the public comment period). He asked several parents to email him directly for a follow-up response.

Improved Communication: One parent with two children attending Seth Boyden Elementary asked Taylor how he would “sell the integration plan to the community.” Taylor said that at his first public presentation he had heard repeatedly from the community that communication was lacking in the school district. “I’ve taken it upon myself to communicate as much as I can,” he said. “I know we still have a long way to go.” Taylor added that communication around the integration plan was among his “highest priorities.”

Restorative Practices: A South Orange parent and graduate asked about the district’s priorities and what the community was doing to “break down the tracking of African-American students.” Taylor pointed out that the Board of Education had recently upgraded and approved curriculum in 16 subject areas as one of its priorities, and he reaffirmed his commitment to bringing restorative practices to teaching staff.

Registration Problems: Another parent whose son attends Clinton Elementary School lamented the hours-long pre-K registration process for his daughter, saying it was “worse than going through the TSA or getting a license or getting a passport.” Taylor said the comparison “does not make me happy” and explained that because the early childhood program is a grant-funded program involving federal funds administered by the state, there were additional compliance requirements. “Whatever we can do, I can definitely follow up with,” he said.

Accessibility and Safety: A parent asked about the district’s priorities around compliance with the Americans With Disabilities Act and for further details around school lockdown drills, changes to which the BOE discussed at its September meeting. Taylor referred to the most recent SOMSD newsletter, saying that meetings with principals have begun and that compliance with the ADA was “not negotiable.” Acknowledging that “code red” lockdown drills were “very upsetting to some of our students,” Taylor said the district has worked with “a mental-health specialist” and consulted with attorneys, police, principals and Director of Security Thomas Shea to modify how the drills were carried out. The district was scheduled to carry out a training session with principals on Friday, October 4, he said, and the policy would be presented to the Board of Education committees to review and provide feedback on, he added. “I don’t want to go into detail with the press here.”

Screen Time:  A parent with a daughter at Seth Boyden raised concerns about apps such as ST Math and GoNoodle that are part of the curriculum. “Children need face-to-face time,” she said.” I think the idea of using screens as a level of interaction is wrong.” Taylor noted that the position of assistant superintendent for curriculum instruction was vacant, while adding that computer programs “can be valuable, if supplemental,” in small doses, or for older students. If there was an over-reliance on technology, Taylor said, “It wasn’t done maliciously. We’re not aware of the totality of what we’re doing.” Taylor said it was a topic of interest to follow up on.

QSAC Compliance: One parent said that she would like to see critical thinking skills incorporated into the curriculum. “I really feel that it’s missing. I can’t believe more people aren’t more shocked at the quality of instruction that’s being given,” she said, drawing applause from the audience. Taylor said that educational technology vendors often pitch their products’ ability to bring schools into compliance with such standards as the New Jersey Quality Single Accountability Continuum (NJQSAC) but added that he was concerned about the issue. “What I would love to do is a deep dive of the timelines of how it happened,” he said. “Sometimes we make decisions through different administrations. I will take it back and discuss it.”

Anti-Bias Training: Thair Joshua — one of seven candidates vying for three seats on the South Orange-Maplewood Board of Education in the November 5 election — asked whether certificated and non-certificated staff alike would receive anti-bias training. Taylor said that “a lot of our non-certificated staff are not employees,” making it difficult to require and schedule professional development for everyone. “Anti-bias training should be required for every single person in our school district,” Taylor said, adding that the district was looking at a way to standardize training. But he noted, “As much PD we want to give, there’s a limited calendar.”

Consistent Curriculum: The mother of two students at Marshall Elementary School noted that curriculum seemed to vary from school to school. “Consistency would be great,” she said. Taylor said that it was “a major focus,” casting the issues as a “delicate balance” between new and veteran approaches. “You want to have creativity. You want to have innovation,” he said, adding that it was an issue the district was considering.

Climate Crisis: “I believe in science,” Taylor said in response to the mother of three boys at Tuscan Elementary School who wanted to know how the district was educating students about the global climate crisis. The line drew applause from the audience, and Taylor cited the district’s accommodating stance toward last week’s student walkout.

Parent Portal: One mother of two students at Seth Boyden asked if there would be an alternative to the new PowerSchool online parent portal for households without internet access. “It’s very difficult in my experience to require something and also offer an alternative,” Taylor said, adding that he would look into working with the Parenting Center to provide web access for parents who need it.