The Columbian: When To Teach Consent

With all schools in New Jersey in distance learning mode, the dedicated staff of Columbia High School’s award-winning student newspaper, The Columbian, proudly present their second on-line edition at thecolumbianchs.com. The following Opinion column “When to Teach Consent,” by Guest Columnist Zoe Ferguson, was originally published by The Columbian on June 10, 2020. With permission from CHS administration and staff at the newspaper, Village Green will be posting more content from the current issue of The Columbian in the coming days and weeks. 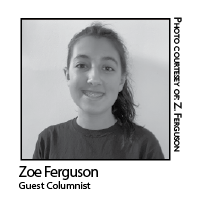 “How can a mother or father prevent their teenage son from someday being accused of sexual assault?” asked Samantha Schmidt of The Washington Post. Parents across the country have been wrestling with questions like this in the midst of the #MeToo movement, but they’re approaching the topic the wrong way. Parents should not wait until their kids are teenagers to teach consent. They should begin teaching it when they’re toddlers. Do not misunderstand—I am not advocating for “sex ed for toddlers.” The point is to establish an understanding of a concept that is not limited to the moment of a sexual encounter.

According to the National Sexual Violence Resource Center, one in five women and one in 16 men are sexually assaulted during college. In eight out of 10 cases of rape, the victim knew their assaulter. These figures are appallingly high and show a broader problem: in this country, we have a culture that does not understand the full meaning of consent or how far it reaches. At the heart of the problem is the fact that our education system and our culture generally thinks of consent too narrowly and addresses it too late.

Only 24 states require teaching sexual education in health classes. Moreover, only 10 require teaching consent. Of those 10, none have an established curriculum for teaching consent. California has been one of the most proactive states in ad- dressing consent, passing the “Yes Means Yes” bill in 2014. While it imposes several changes, it only applies to universities and, therefore, fails to address the root of the problem. There is a desperate need for a progressive state—like New Jersey—to take a comprehensive approach to this issue.

So what would that approach look like? For starters, consent should be taught at a much younger age. Establishing consent as a fundamental concept during elementary school is crucial to helping children master it later in life. The notion that we should respect one another’s boundaries is an idea we learn in preschool anyway, so why not develop it further? We need to teach kids that “it’s okay if you don’t want to share” and “it’s fine if you don’t want to play right now.” It is the elementary school equivalent of instructing young people to ask permission before making a sexual advance and to feel like they can say no to such advances. Starting to teach consent at an early age is also important because this is a critical period for learning. Think of it like a language; you can learn one at any age, but once that critical window for acquisition closes, you’ll never be as fluent as you could have been if you had been exposed to it early on.

Everyone needs to be a stakeholder in fostering the language of consent. But most importantly, parents should be educated in teaching their children the importance of respecting boundaries in all walks of life. When it comes time for discussions about “the birds and the bees,” issues surrounding consent in a romantic relationship should be included. For their part, kids should be told that they have both the right to expect—and the responsibility to foster—a culture that promotes consent as a central value, not an uncomfortable puzzle. In order to change the way society thinks about the issue of consent, we need a comprehensive approach that codifies consent as a fundamental social skill taught early and regularly, both in school and at home. Consent is a life skill, not just a concept for sexual relationships. Let’s not wait on consent; your son or daughter’s future may depend on it.