DeLuca on Maplewood’s Economic Development: “We Have a Plan”

Here is a summary of the first part of the interview, which covers updates on the Post Office site in the Village, the PSE&G site on Boyden Avenue, and other development — and issues — on Springfield Avenue.

Coming up in next week’s installment: more development, news about Irvington Avenue, The Woodland, the Memorial Park master plan, and public safety. 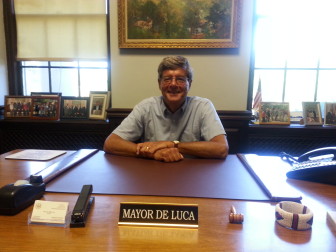 Construction has been pushed back to the spring, while negotiations continue with the developer, L&M Development Partners. DeLuca said the town and L&M were going “back and forth” on a sales price but “expect to move forward.”

Meanwhile, the Post Office has signed a lease at 195 Maplewood Avenue for 3,000 square feet, which they are currently building. The township committee will vote on Tuesday whether to extend the Post Office’s current lease until February 15.

Since Kings decided not to move into the Post Office site from its current location across the street, L&M has been in discussions with various other potential tenants including food and retail businesses, DeLuca said. The town is not directly involved in the negotiations, but L&M have been keeping officials apprised of the progress.

Some existing downtown businesses have expressed interest in the space, DeLuca said, though he declined to identify any.

Don’t look for a supermarket, however. “There’s no supermarket that’s going to come there [now] that Kings will remain in its current space,” said DeLuca.

The township hasn’t yet closed on a deal with Parke Place LLC, which will develop the former PSE&G site at 186-238 Boyden Avenue (at the intersection of Springfield Avenue) into a 223-unit, studio, 1- and 2-bedroom high-end apartment complex (with six units set aside for affordable housing).

There will be no retail tenants as had originally been proposed because the township’s planning board was concerned about parking and traffic issues. There will be a parking garage on each floor, and the developer is widening the street near the fire station across the street to ease traffic congestion.

The developer is currently addressing issues of contaminated soil, as well as asbestos and lead contamination. “[They] wanted to move faster, so we worked out a deal to do the cleaning on their dime,” said DeLuca.

The town is discussing granting the developer a 30-year PILOT (payment in lieu of taxes) at 10% of construction costs, which are estimated to be roughly $40 million. The township committee has indicated support for the PILOT but has not yet taken a formal vote, said DeLuca. Lawyers still drafting the agreement.

In addition to the six affordable apartments, to meet its affordable housing obligation Parke Place is contributing $340,000 to the Township’s Affordable Housing Trust Fund, DeLuca said. That will allow for the repair of 17 existing homes in Maplewood for families that meet NJ affordable housing income requirements. Additionally, Parke Place is contributing $100,000 to the Township for the Maplewood Pool after the certificate of occupancy is awarded.

When Maplewood Crossing, the 120-plus unit apartment complex on Burnett Avenue, was built, as part of the 30-year PILOT agreement the developer paid the town $120,000 for work on DeHart Park.

The granting of PILOTs can be controversial in municipalities. “I’m not a big proponent of PILOTs,” said DeLuca, who advocates using them in a limited way. “If we want these properties developed it’s better than having a vacant site.”

He said because of the environmental issues at the PSE&G and Maplewood Crossing sites, a PILOT was necessary to get anything built.

At least anecdotally, some local merchants have reported a spike in business since the completion of Maplewood Crossing, DeLuca said. “Retailers think [these developments] are a step in a positive direction.”

“The PSE&G site is a major investment, it’s a huge anchor that will help spur more development from Chancellor [Avenue],” DeLuca said.

In 2012, DeLuca and town officials were criticized for giving the developer of The Station House, the apartment complex on the site of the former Police Station, credits for environmental abatement. However, DeLuca said, The Station House is now the fifth largest taxpayer in Maplewood.

Meanwhile, Maplewood Crossing is 90% leased, and DeLuca said the first PILOT payment from the developer to the town reduced the town’s tax increase by a half point this year.

The town expects the Parke Place development to attract a similar demographic as Maplewood Crossing, mainly young professionals, divorced people and empty nesters. (To calculate the potential number of school age children who will live in these apartments, the town looks to data from such sources as Rutgers Bloustein School of Planning and Public Policy, which found that such developments do not tend to attract large numbers of school-aged children.)

The town is still working, and in some cases struggling, to develop properties on Springfield Avenue and make it more of a retail destination.

DeLuca said the avenue’s biggest problem is its narrow lots, which are a deal-killer for many businesses. In addition, there are what DeLuca calls the “sociological” issues. “We are still suffering from [people’s] perception of Springfield Avenue, it’s a huge issue,” he said. In fact, crime on the avenue is no greater than in Maplewood Village, the Mayor said, although combating crime in some residential areas off the avenue has proven difficult.

DeLuca said the town is trying to present more opportunities for people to have positive experiences on Springfield Avenue.

“Pulling people up there for events, music at the gazebo, places of comfort and entertainment…” he said. “We’re trying to make people know what’s there, get people aware of the shopping choices and utilizing them.”

DeLuca noted that although people often express a desire for more mom-and-pop businesses, those businesses often lack a strong business plan. Also, a developer with “deep pockets” can afford to buy larger parcels of property. He pointed to the Deals dollar store as an example, as well as Advanced Auto Parts, which will be moving into the old World Tire space.

Does the town have an overall strategy for development in Maplewood? Yes, said DeLuca. “We have a longstanding plan, we have an economic development plan, a master plan, a Springfield Avenue Partnership redevelopment plan.”

Town officials look to create viable special improvement districts. “It’s like being the manager of a mall,” he said, with the town doing physical improvements simultaneously with organizing and promotional work.

On Springfield Avenue, the township is focusing on creating two pedestrian anchors around Prospect Street and Burnett Avenue. “The rest is an auto destination,” DeLuca said. “Anyone who thinks we can make [the rest of the Avenue] a pedestrian friendly place is dreaming.”

In general, the township seeks to keep taxes down through economic development, said DeLuca.

“If we keep commercial properties as high, valuable rentable space,” those properties can be assessed at a higher amount during revaluation time, which prevents the tax load from shifting to residential properties.  “So robust business activity is really important.”

Also, if commercial properties do not stay as high value rentals, the owners can submit tax appeals based on reduced income, DeLuca said. “It is important to create a business climate that brings in high paying rent to protect property tax ratables.”

Another challenge, said DeLuca, is landlords who “don’t have the same vision we have, DeLuca said “Maplewood Village needs to be preserved,” said the Mayor, “and we want [landlords] to get on board and be creative regarding the businesses we get” in both the Village and on Springfield Avenue.

DeLuca said the town and the two special improvement districts were trying to educate owners to seek out businesses that were “high end” rather than those that would give a quick turnaround.