Essex County Executive Joseph N. DiVincenzo, Jr. announced that new traffic signal equipment was installed at the intersection of Valley Street and South Pierson Road in Maplewood on Thursday, February 24th. The intersection upgrades are part of the County’s ongoing initiative to modernize infrastructure to enhance pedestrian and motor vehicle safety and to meet the changing needs of the community. 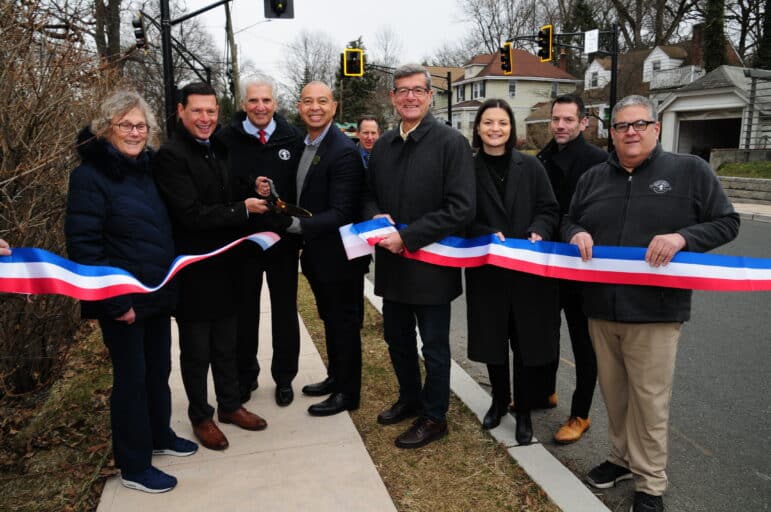 “Traveling along County roads and through these intersections are part of our daily lives. We use County roads to go to work, school and shopping. This project is part of our ongoing initiative to modernize our infrastructure to ensure it meets current traffic demands,” DiVincenzo said. “Valley Street is one of the busiest County roads in Essex, providing north-south access. The high volume of cars traveling this way made it necessary for us to make sure our infrastructure here meets the current traffic demand,” he noted.

“I am very happy to see these traffic signals installed at this intersection. Valley Street is a very business roadway and the traffic lights were badly needed,” Commissioner Patricia Sebold said.

“The County always has been on the forefront of traffic and pedestrian safety. They came through with this project and we are very grateful for it,” said Maplewood Mayor Dean Dafis who was accompanied by Township Committee members Frank McGehee and Victor DeLuca.

The equipment includes LED traffic signals, modern poles, high visibility crosswalks and roadway striping, and pedestrian countdown timers that can be activated by pushing the crossing button. LED lights are brighter, easier to see, more energy efficient and last longer than traditional bulbs. Sidewalks, curbs and roadway pavement was replaced only where it was disturbed by the construction or broken. The signals also are outfitted with GPS clocks to ensure they remain coordinated with other traffic signals along Valley Street.

The new traffic signals installed at the intersections of Broadway & Carteret Street and Broadway & Kearny Street are part of a larger traffic signal improvement project that also included two intersections in Belleville, two intersections in Bloomfield, two intersections in Irvington and one intersection in Maplewood. NV5 from Parsippany received a professional services contract for $468,840 to design the upgrades at all locations. Assuncao Brothers, Inc. from Edison was awarded a publicly bid contract for $4,825,659 to perform the construction work at each intersection. Essex County received a $5,054,693 grant from the Federal Local Safety Program (LSP) to fund the project. The Essex County Department of Public Works monitored the project to answer question and avoid delays from occurring.