The Army Corps of Engineers has accepted a recommendation by the NJ Department of Environmental Protection not to build a dam in South Mountain Reservation.

In an email today to Fred Profeta, Chair of Save Our Reservation, the Army Corps District Engineer for the the NY District confirmed that the Corps will be following the recommendation of the DEP.

Joseph J. Seebode, Deputy District Engineer, wrote, “Fred–I have seen the letter from NJDEP supporting Alternatives 4 and 7a. Based on that letter, the position of the Mayor’s Council, and from what we heard at the public meetings, we are moving out with the detailed planning, analysis, and engineering for Alternatives 4 and 7A. We await decisions on future federal funding to enable the efforts to move forward.”Seebode concluded, “We do not intend to spend additional time, funds or efforts on the other alternatives that were considered.”

Option 4 involves constructing two 30″ outlet valves in the existing Orange Reservoir dam in the reservation and doing channel work in Cranford, which would deepen the existing channel and remove two dams there which back up water. The valves in the Orange dam would be used to release water slowly in advance of a major storm, letting the reservoir fill back up during and after the storm.

Option 7a involves waterproofing some structures in Cranford, raising some up, and taking down two, said Profeta, who said that option is not popular with Cranford officials and residents.

Regarding Seebode’s email today, Profeta said, “I think this makes it conclusively final!” — meaning there will be no dam.

Amid wide-spread opposition from a coalition of elected officials, community leaders, environmentalists and residents — including a grassroots campaign that saw lawns throughout South Orange, Maplewood and Millburn dotted with “No Dam” signs — the New Jersey Department of Environmental Protection (DEP) recommended earlier this month against building a dam in South Mountain Reservation.

In a letter to the US Army Corps of Engineers, the DEP advised against the plan for the 75-foot high, 810-foot wide dam across the Rahway River in the southern section of the reservation, and instead gave the nod to two other options for flood mitigation.

The dam, one of ten alternatives that emerged from the Army Corps’ Rahway River Basin Flood Risk Management Feasibility Study, was intended to help abate destructive flooding seen in Cranford and other downriver towns. 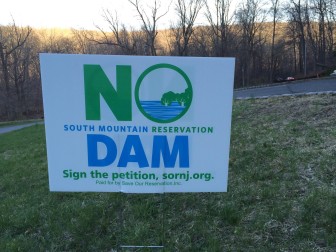 Save Our Reservation, in cooperation with the South Mountain Conservancy, local environmentalists and other organizations, had pushed for alternatives to the problems of flooding along the Rahway River watershed, saying construction of the dam and the associated 110-acre dry detention basin would “irreparably damage” the century-old reservation.

In addition, nearly 6,000 residents from towns around the reservation signed an on-line petition opposed to the dam and suggesting alternatives that would cost less, protect flood-prone towns and preserve the reservation.

“The decision by the DEP weighed the benefits and costs of ten alternatives to implement flood mitigation for communities from Millburn to Rahway,” said Dan Aschenbach, former Mayor of Cranford and coordinator of the Mayors Council Rahway River Watershed Flood Control, in an email after the DEP’s letter was released.

“Alternative 4 had the best benefits over cost amongst the alternatives reviewed, meaning at peak storm conditions the river water elevation would be significantly lower if the alternative got implemented,” Aschenbach said.

He continued, “The Mayors Council is pleased that the reservation can be protected yet meaningful flood protection can still be achieved. We hope all those who expressed concern about the dam now can support the alternative 4 and also to improve stormwater management including development of non-structural solutions such as rain gardens.”